With its Snapdragon 400 processor the ZTE ZMAX isn’t exactly a flagship, but with its 5.7-inch screen, can it hold its own against the high-end phablets?
Published 04 November 2014, 10:43 EST

It feels like Samsung started the trend – phones that were half-tablet with large screens that barely fit in our pockets. Now it seems like everyone is trying to jump onboard the phablet train! Over the last few weeks I’ve been looking at the ZMAX from ZTE, which proves that even affordable phones have “big phone” fever!

To start with, the ZTE ZMAX is big. With its 5.7-inch screen it’s right up there with the big guys like the Note 4 and the Nexus 6. It feels significantly larger than my daily driver, the Nexus 5, even though it only stands about 1-inch taller and a quarter of an inch wider. The back has a slight curve to it which helps it feel nicer in-hand, but the edges on the the front are fairly sharp, which makes gripping it feel very secure. 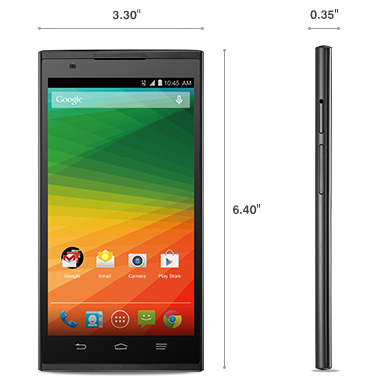 Once you start putting the ZMAX to use it becomes obviously apparent that it’s just like any other Android out there. Other than some changes to the lockscreen and a few built-in apps, the ZMAX almost feels like it could be a Nexus – the experience is very close to stock Android, with just a few T-Mobile tweaks and ZTE apps added in on our review model.

The screen is big, bold and bright. Colors seem vibrant, but blacks are a little washed out. With a resolution of 720P it’s got plenty of detail, but its PPI is only around 258, which is significantly lower than what we’ve become used to. In this case, however, that’s probably a good thing!

The processor powering the ZMAX is a lowly quad-core Snapdragon 400 clocked at 1.2 GHz. It’s not going to win any performance contests, but how it does perform might be best described as “surprisingly adequate”.

Since the display is only 720P, there aren’t a ton of pixels that have to be pushed and refreshed to the screen. This helps with perceived performance as well as battery life, which went for days between charges.

Voice calls were good with noise cancellation coming in handy and working as expected. LTE data rates were right what we’d expect them to be on T-Mobile in our area.

Overall, the ZMAX is a well-built, decent all-around device. If you’re looking for a phablet but can’t stomach the premium price of flagship handsets, give the ZMAX a shot!

Today Samsung announced the new Galaxy Note 20 and Galaxy Note 20 Ultra via the Galaxy Unpacked Livestream web broadcast. What are they really like to hold in the hand?

Today’s deals come from Amazon, Best Buy and B&H, where we find the Google Pixel 4a, Samsung Galaxy S10 and more devices on sale