Nubia Red Magic is ZTE’s stab at a gaming smartphone, priced at $400 with Snapdragon 835 SoC

Gaming-focused smartphones seem to be all the rage all of a sudden, as Xiaomi recently followed in Razer’s footsteps, and now ZTE joins the new battlefield with a swanky high-end handset called Red Magic and sold under the Nubia sub-brand. Unfortunately, this bad boy comes packing last year’s Snapdragon 835 powerhouse processor, unlike the Black Shark phone, which promises considerably more raw speed, thanks to a new and improved 845 SoC.

The Nubia Red Magic does at least pair Qualcomm’s slowly aging chipset with up to 8GB RAM, as well as 128GB internal storage space, covering both your intensive multitasking needs and digital hoarding compulsion. There’s no word on what Razor claims makes a gaming phone worthy of that title, namely a 120 Hz refresh rate for a 6-inch Full HD+ screen with an ultra-wide 2:1 aspect ratio.

You also get a single 24MP rear-facing camera and a single 8MP selfie shooter, which feels a little disappointing by 2018 flagship mobile device standards. On the bright side, the Red Magic truly looks like no other phone on the market, with an overall ergonomic design and “industry-first” RGB strip at the back supporting 16 million colors and four different lighting effects to “mimic your gaming persona.” 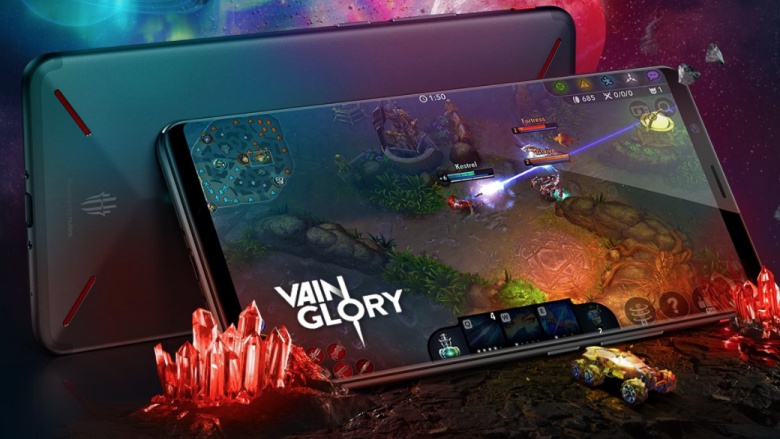 Another customizable feature is a dedicated game button that claims to learn about your “personal preferences” in order to apply them for a “more seamless software experience.” Speaking of software, Android 8.1 Oreo comes pre-installed, although various Nubia Red Magic OS tweaks may alter the stock feel quite a bit.

A “monster” 3800mAh battery aims to get you through around 7 hours of Arena of Valor gameplay, while an “all-new air convection cooling system” guarantees the Nubia Red Magic will never run too hot. In theory, ZTE would like to release this worldwide, accepting pre-orders on Indiegogo at $399 a pop starting April 26.

But it remains to be seen if the company will be allowed to use Qualcomm chips and essential Android services in key Western markets after all. For the time being, hardcore mobile gamers in China should be happy to hear regional sales will begin on April 25, at 2,499 yuan ($398) for a 6GB RAM/64GB ROM configuration, and CNY 2,999 ($477) with 8 and 128 gigs respectively.

A new method describes how to install Google Play Services on your HUAWEI smartphones. Read the details and find the download inside.

Aside from extending the warranty, OnePlus is also testing a back-up device plan to keep a phone in customer’s hands while their device is out for repair.
YouTube 1.8M
Facebook 572K
Twitter 196K
Instagram 134K
RSS