This is the Chinese manufacturer’s first flagship device on an American carrier ever. ZTE hopes it will unfold into a butterfly.

According to a CSE & Vantege survey, 68 percent of respondents said that they switch between apps “frequently,” and ZTE is capitalizing on this “pain point” to launch its brand as a salve in the iterative mobile industry. The Chinese OEM is in New York this morning to debut its first top-tier phone that will be sold by a carrier ever. That carrier will be AT&T and the phone is the Axon M.

While the company has had two Axon devices under its US belt, having network notoriety commands attention. The phone maker hopes to capitalize on that with a statement piece — a folding smartphone with two full-sized traditional displays that can come together as one, but provide a full-screen multitasking space. It can be set into a folded, flat or tent positions for two-person interaction. 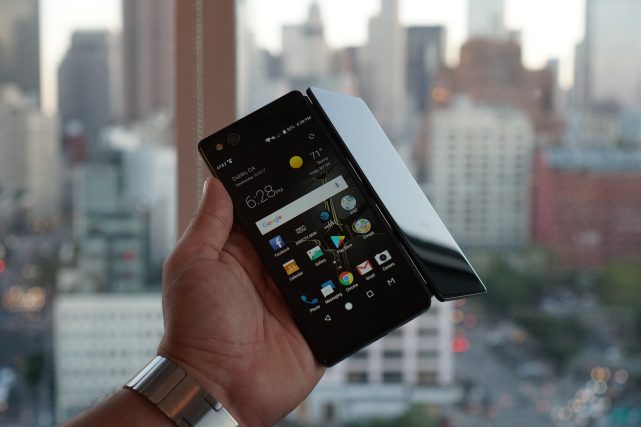 When folded, the device spans 12.1mm thick. Spread out, its mass comes across as a near-square, approximately 150 x 143 mm. The single camera, with the folding nature of the device, can be supported with a viewfinder taking rear-side or front-side pictures. In addition to the specs above, we find dual bottom-firing speakers, a USB-C port with version 2.0 spec, Wi-Fi ac, Bluetooth 4.2 and a fingerprint sensor topping the side-mounted power button. Continuing the Axon’s high performance audiio lienage, there’s 32-bit and Dolby Atmos support through the AKM 4962 chipset.

As with the other Axon phones, customers will get a two-year warranty and, for travelers, an overseas replacement service through the Axon Passport M program among other amenities — Android Oreo will come within this device’s lifetime. It will come onto AT&T Next within the next month with 30 monthly payments of $24.17 ($750.10 full retail price). Japan’s NTT docomo will announce availability within the day. China Telecom and JD.com will both carry the phone in the first quarter. European partners will see the same timeframe.