Asus built this phone around one specific photography feature. Is it the phone camera to beat? Here’s our full ZenFone Zoom review!
Published 26 February 2016, 19:43 EST

We don’t see “experiment phones” as often as we used to. Smartphone design is largely homogenizing around a limited range of design options and aesthetics. Whenever a company takes a risk, targets a specific niche, it’s always exciting to see what might arrive. Asus is doing just that for the camera crowd, building a phone around one specific feature. This isn’t just a “camera phone”, the clue to their targeted demographic is in the name of the device.

Immediately we can drop any pretense of this being an “all rounder” phone, but who is this device actually for? Does the Asus ZenFone Zoom succeed in its experiment? Here’s our full review! 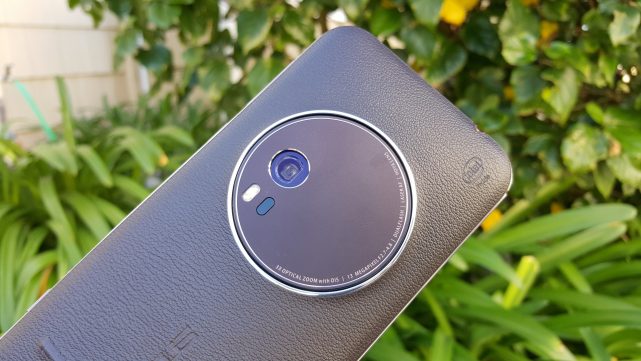 The ZenFone Zoom is a big phone, and it feels like a big phone in the hand. This is understandable as the camera module requires quite a bit of space, but this introduces challenges for other hardware components. The 5.5” IPS LCD is respectably bright for outdoor reading, it has very good viewing angles, but bezel snobs will be disappointed by the screen to front face ratio here. There’s a lot of bordering plastic, a large forehead, non-backlit capacitive hardware navigation buttons, and a separate chin piece. Ultimately the screen only takes up around 65% of the front face, and that’s how we arrive at a phone bigger than an LG V10, with a screen about the size of an LG G4.

The whole affair is powered by an Intel Atom Z3580 Quad Core, which was initially released around the same time as the Qualcomm 805 which powered phones like the Note 4. Our review unit came equipped with 4GB of RAM and 64GB of built in storage, with a 3000mAh battery.

The overall design is attractive and practical. The removable back plate is leather, and as the phone is camera focused, includes a handy little ridge to help hold onto the device. The edges are aluminum, which recalls devices like the Note 4, and corners are rounded similarly to what we might find on an HTC M9.

The back is removable, granting access to MicroSD and SIM card slots, but the battery is not user replaceable.

The focus on camera performance also influences button arrangement. Like a Lumia, all controls are on the right side of the phone, which makes operation much easier if the phone is ever mounted to tripod. The volume rocker doubles as the zoom rocker. There’s a two stage shutter button for launching the camera app and shooting stills, and a dedicated button to shoot video. The bottom left corner holds a lanyard strap port, a handy addition to prevent accidentally dropping the ZenFone. It’d be nice if more phones, even non-camera focused phones, had this option. 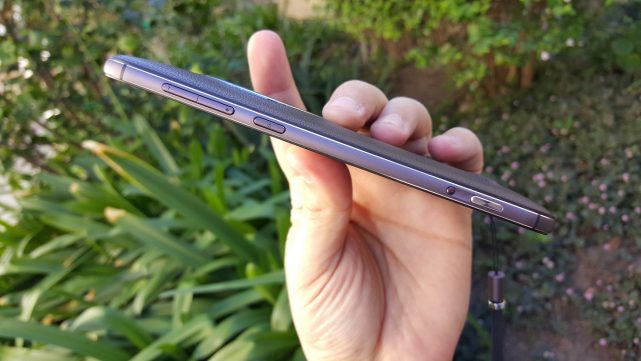 From an aesthetics perspective, it’s one of the best balancing acts we’ve ever seen marrying smartphone to point and shoot camera.

The ZenUI launcher default settings recall the juicy colored efforts of LG circa the G2. Happily, this launcher is easy to customize, with similar options found on third party launchers like Nova. If granular settings aren’t your thing, you can also theme directly through the Asus store, with plenty of free and premium options to customize your phone.

Like previous Asus phones, there’s quite a bit of custom software pre-installed on the ZenFone Zoom. Happily, less of that seems to come from third parties, only Trip Adviser, Amazon Kindle, and Clean Master. The number of management apps feels unnecessary though. Asus provides a mobile manager which monitors battery, RAM, and data usage. There’s a separate app for monitoring battery and performance modes. Clean Master also claims to help you save battery by killing background apps, and monitoring RAM. All three of those management apps work separately from the built in settings and processes built into Android.

The ZenFone Zoom is still running on Android 5.0, but during our two weeks using the device we have received to small patches. While we don’t know when we might receive an update to Lollipop or Marshmallow, we are at least receiving support to fix bugs.

Our Real Camera Review will give you the most in-depth look at the ZenFone Zoom’s camera performance available on the internet.

Here’s the real meat and potatoes of this review. Asus is betting on the camera, and has created one of the most undeniably cool solutions for incorporating a zoom in a phone. Instead of stapling a phone to a point and shoot camera lens ala the Galaxy K Zoom, the Asus utilizes a series of periscope-like prisms that allow the entire lens assembly to be mounted vertically in the camera housing. Nothing protrudes from the rear. The actual zoom feature works surprisingly well, giving you a 3X optical reach which doesn’t degrade your images like software “cropping” zoom solutions on other fixed lens phones.

The issue facing potential customers is that the rest of the camera experience feels compromised. We have a 1/3 inch 13MP image sensor, paired with OIS and laser autofocus, but actual output from this setup falls far behind other similar camera sensors. Images are a bit dull, detail and color often feel smeared. While you do have options to adjust post processing, changing a setting like sharpening, one adjustment step often feels like too much or too little.

We run into compromises. The ZenFone doesn’t start with a particularly wide aperture of f/2.7, but as you zoom, it closes down to f/4.8. This is common for a zoom lens, but it does mean that the zoom will be trickier to use indoors and at night. Also, The smaller sensor size and aperture combo means this won’t deliver the prettiest background blur.

Video performance is also disappointing. We see similar dull color and contrast, and a general lack of clarity. The Asus will top out at 30FPS 1080p video, but the frame rate will drop in low light to 20FPS. Indoor and night time video will look streaky or blurry. 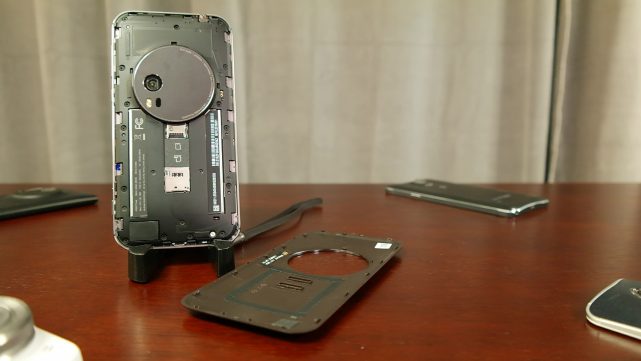 If you look at the lenses produced for DSLRs, it can be really difficult to create a clear, sharp zoom lens at an affordable price. A good short zoom will often cost almost as much as a low end camera body. The engineering feat of building a zoom lens into a phone is impressive, but it comes at the expense of clarity, bokeh, and low light performance.

Intel’s Atom processor hasn’t been a popular chipset for mobile phones. Sliding through the UI, loading social media apps, and streaming HD media, you’ll rarely encounter lags or stutters. We should be able to take this for granted in this day and age, where mid-range and low-end phone processors handle the basics reasonably well. Having 4GB of RAM on tap meant fast recovery times for apps, once we backed off the manager apps killing background services. 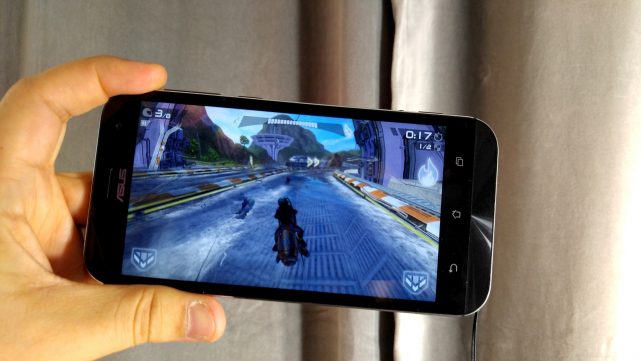 Taxing this hardware with some games, we see this chipset struggle. Older titles like Skyforce 2014 play fluid and smooth. Moving to Riptide GP2, we start to see the occasional dropped frame or lag, but it’s still an acceptable gaming experience. Playing more demanding titles like Marvel Future Fight, game play becomes choppy, even on medium graphics settings. It does feel like the kind of performance we would have expected from a year old flagship, and depending on what titles you enjoy, can still be outperformed by a Note 4. 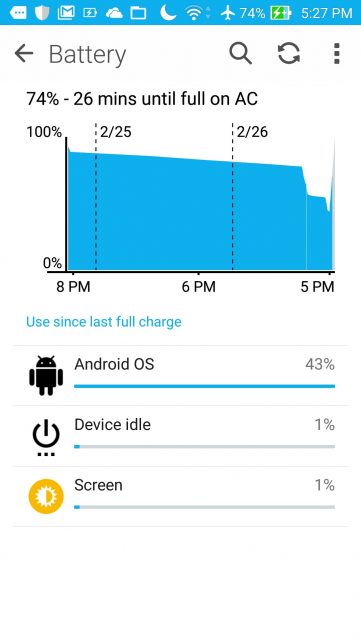 Battery performance on our review unit was a bit disappointing. When used for basic communication, it’s an easy phone to push through dinner time. Incorporating any multimedia throughout your day will hit this battery hard. On a video streaming test, 30 minutes of HD video playback at 50% screen brightness, the ZenFone Zoom drained 12% of its battery, making it one of the worst performers we’ve run through similar tests. By comparison, a Galaxy S6 with a brighter, higher resolution screen and smaller battery only drained 10%. If you engage in a little light gaming, you’ll probably need to top off the battery before dinner. The combo of firing up the camera sensor and keeping the screen bright for outdoor photography will also drain juice quickly.

Quick charging helps take some of the sting off, and you can count on around a 60% charge after an hour plugged in.

Call quality is a bit lean from the front speaker, but there weren’t any complaints from callers about the audio quality being sent. The noise reduction mics did a fine job during outdoor calls. 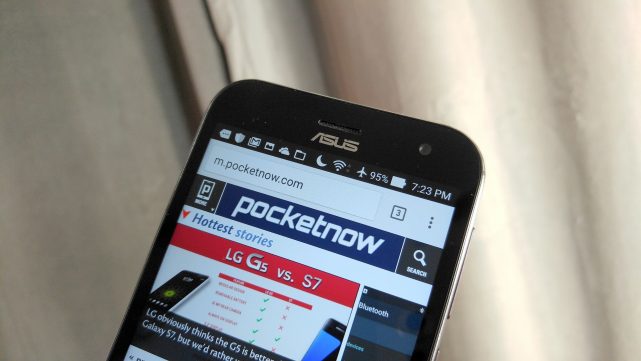 The rear speaker is plenty loud for alerts, notifications, and ringtones, but falls a bit flat for video, music, and video gaming. Dull reproduction, lack of clarity, and there’s just not enough room on a single speaker to introduce more bass.

Headphone playback is somewhat poor. There’s a general air you can hear in moments of silence. It’s not quite a hiss, but is an observable noise floor. Bass lacks oomph, and the highs feel more magnified than they need to be. On live classical recordings, this actually kind of works, but rock and electronica felt shrill and tinny for any elements in the higher EQ. 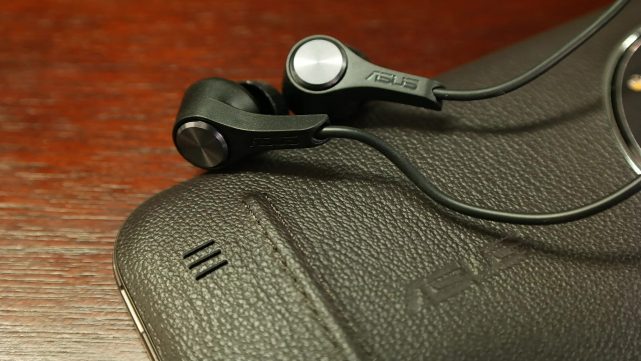 We also ran into some issues with the two different audio processing modes on the ZenFone. Moving between the Asus processing and Android’s native processing can crash the EQ plugin.

The unlocked ZenFone Zoom sells for $399 through online retailers like B&H. 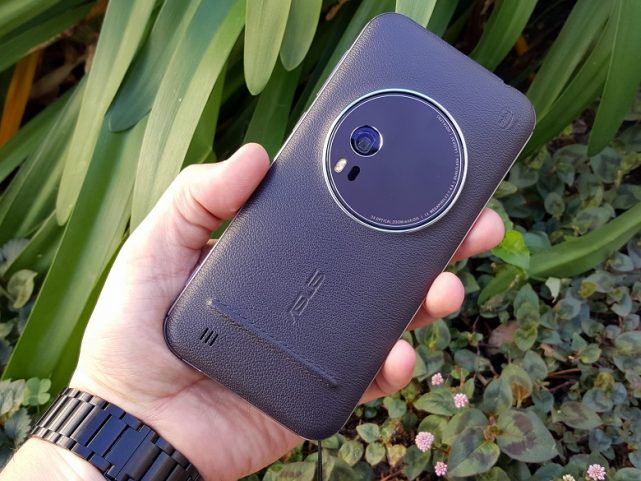 This is always painful.

We want to reward daring design. We want to celebrate when companies take risks. The ZenFone Zoom is an incredible feat of camera design, but the crown jewel feature of this phone in many ways compromises the camera that the zoom lens is supposed to enhance. That unfortunately becomes the end of the review. When a company places so much responsibility on one feature, it’s exceedingly difficult to ignore that feature for any kind of objective comparison with other phones. It’s the ZenFone Zoom, we can’t rightfully say “but ignoring the camera…”.

There’s a market for every device, but the ZenFone Zoom is a niche of a niche. The consumer here needs to care enough about photo features to value the zoom, but isn’t as discerning when it comes to photo and video output. Otherwise, there are a number of devices around this price point which can outperform the ZenFone, or cheaper devices that can hang with it.

On today’s Pocketnow Daily, we talk about the possible changes coming with the new iPhone SE, Samsung Galaxy S22 Ultra leaks, and more.

Samsung is no longer accepting more beta-testers into the One UI 4.0 Beta program,…