Is the ASUS ZenFone 2 the Android with the best bang for your buck?

Flagships, mid-tier, and entry-level phones. Each have their own demographic target. Each carefully balances pros versus cons, and power versus price. Flagships generally cost between US$400 and $600 for smartphones, and a couple hundred more for phablets. Mid-tier phones typically run about half that, though things start to get muddy when you try and calculate the cost of a mid-tier or entry-level device without a carrier subsidy. What you rarely see is a phone with really good specs and a really low price tag. Then again, the ASUS ZenFone 2 seems like it might be such a device.

We got our hands on the ASUS ZenFone 2 at CES. Michael Fisher was pretty impressed with its specs, but the shiny removable backplate (which comes in all sorts of colors and textures) did a fair job distracting him. At first glance you’ll probably notice that the specs of the ZenFone 2 looks a lot like the Nexus 5. It’s got a 5.5-inch screen sporting a full-HD resolution of 1080P – that’s certainly nothing to frown at. Though the phone won’t be released until later this quarter, we know that it will be available in at least two configurations. One of which will sport a 64-bit quad core CPU clocked at 1.8GHz and the other clocked at 2.3GHz. RAM is a respectable 2GB for the base model, but the higher-end version will come with 4GB. That’s all but unheard of in a phone these days.

The ZenFone 2 comes with what looks to be decent cameras on the front and back, though we’ll have to wait until we can get some serious hands-on time with the phone before we can pass final judgement there. One place that it earns points today is with the addition of a microSD card slot, though it only accepts cards up to 64GB.

Then there’s the price 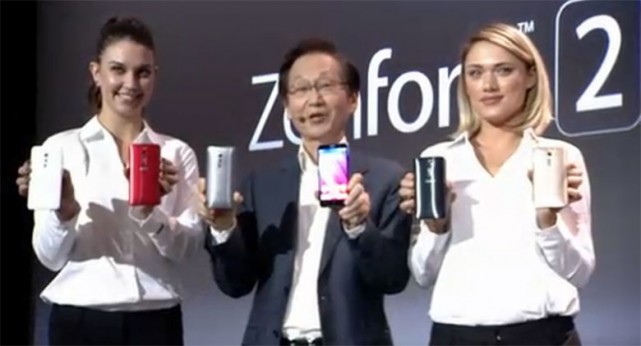 Unlocked, ready to work with any SIM you throw at it, the base model promises to sell for US$199. No, that’s not a typo, nor is it a subsidized price that ropes you into a two year contract. That’s out the door, in-hand, no strings attached. That’s a pretty good price! Though we don’t know what the high-end configuration is going to resell for, at $199 this “little” phone could very well be the best Android-powered phone for your money.

Up until now, Motorola’s Moto G has been one of the only low-priced, well-performing Android’s on the market.

The processor running everything is the Intel Atom Z3560 or Z3580, depending on which configuration you choose. Both are 64-bit, and both include the PowerVR G6430 on the graphics side. Neither have been run through as much real-world testing as we’d like – not yet anyway. That’s where the real unknowns are. How well this chip will perform across a wide variety of devices remains to be seen.

We do know that it’s the successor to the “Bay Trail” tablet processors from Intel. Codenamed “Moorefield”, these processors are smaller than Bay Trail procs and should have “better thermals” (meaning they should run cooler and convert less power to heat). Further, better LTE/LTE-A support has been added or “optimized”.

So while we can’t yet say for certain whether or not the ASUS ZenFone 2 will beat out the Moto G and similarly priced Android smartphones, we are certainly intrigued. If the ZenFone 2 manages to deliver in the performance department, we might be sitting on the edge of an all new price war pitting lower-end phones against flagships.

Hang on folks, this ride is about to get really interesting!