YouTube Music is essentially Google’s latest, purportedly greatest answer to the likes of Spotify and Apple Music, while YouTube Premium is the new name of YouTube Red, also including a Music Premium subscription.
Published 17 May 2018, 05:00 EDT

Created way back in 2005, and acquired by Google just 18 months later for a whopping $1.65 billion, the world’s largest video-sharing platform seems to believe we need yet another “premium” music streaming service.

On paper, the new YouTube Music app, which is different from the old YouTube Music, looks very similar to Spotify or Apple Music, as well as the two market leaders’ many smaller rivals and copycats.

A YouTube Music Premium subscription will set you back $9.99 a month, including a completely ad-free listening experience, unlimited downloads and, yes, background listening, probably YouTube’s most requested feature Google has refused to (officially) support over the years precisely for this reason.

But YouTube Music, scheduled to roll out “starting” Tuesday, May 22 in the US, Australia, New Zealand, Mexico and South Korea, followed by a broader launch in the “coming weeks” across markets like Austria, Canada, France, Germany, Russia and many more, will also include a free tier, allowing “fans” to enjoy the “reimagined mobile app and brand new desktop player designed for music” at no cost, as long as you don’t mind ads.

Interestingly, Google Play Music isn’t going anywhere, at least not yet, although existing subscribers will be offered complimentary YouTube Music Premium memberships, no doubt to make the transition easier. 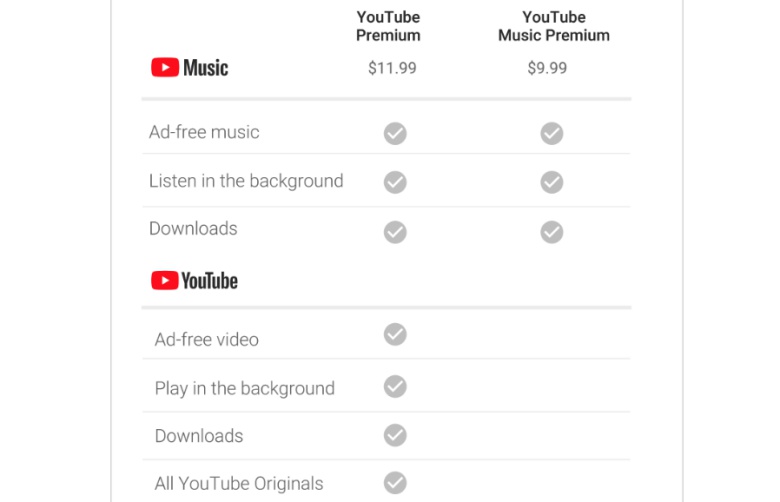 Speaking of transitions, the moderately successful YouTube Red service is getting a new name, as well as a price hike. At $11.99 a month instead of $9.99, YouTube Premium will combine all the existing Red features with the future Music Premium functionality. Basically, you’re looking at an ad-free experience, background play, and downloads across YouTube, as well as full access to original content, including “bigger” series and movies in the near future.

Perhaps the best thing about YouTube Premium is that it will roll out “soon in existing markets” (US, Australia, New Zealand, Mexico and South Korea), then expanding to a bunch of new territories (Austria, Canada, Denmark, Finland, France, Germany, Ireland, Italy, Norway, Russia, Spain, Sweden, Switzerland, and the UK), and aiming for “more expansion throughout 2018 and beyond.” Maybe that’s what Google should be focused on rather than constant and confusing rebranding efforts.