Hear about the changes to a few more Android apps arriving today, including one that look unintentional, an internal YouTube dogfood update.

A few hours back we were looking at the new version of Google Wallet that Google had just announced, but this being a Wednesday and all, we knew to expect word of even more Google app updates to start coming in. We’ve picked up on three of them by now, with new versions of Maps, Translate, and YouTube on the way out to users. Unfortunately, at least in the case of YouTube, it looks like Google might have jumped the gun.

When employees of a company run not-yet-released versions of their own software in order to try and spot bugs, we call that “dogfooding.” The idea is that of “eating your own dog food” – that is, if the app is good enough for your users, it’s good enough for you to use yourself, and by running new builds internally, you can spot issues with the code before it hits the public.

This new YouTube app, as you can see above, features a prominent bone logo instead of the YouTube icon – just like we’d expect from an internal dogfood build. In fact, very visible differences like that are presumably intended specifically to keep someone from accidentally releasing something like this. Google’s almost certain to catch this one quickly, and it’s really a curiosity more than anything.

As for those other updates, the changes in Maps are pretty mild; certain venues now display information on upcoming events, and there are some internal changes pointing to slightly tweaked power-saving features and minor differences with how reviews are submitted.

Update: Here are some shots of the internal settings available in that dogfooded YouTube update, which we’re never meant to see. 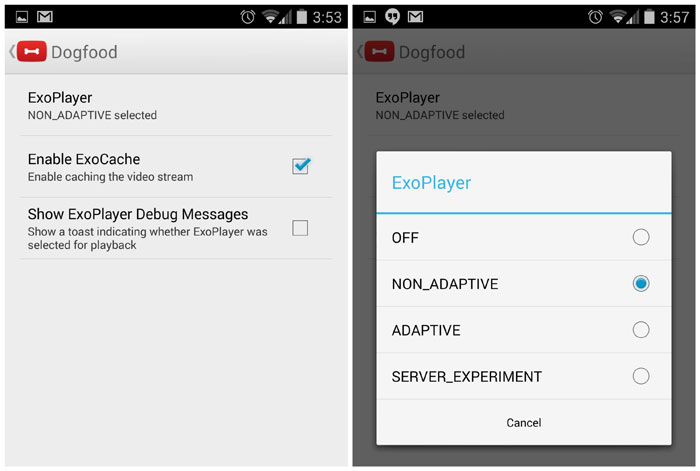