Your Phone Wants To Save Your Life

I knew right away that this wasn’t any ordinary text. Instead of the usual SMS annunciator tone, the phone was bleating out a wailing klaxon, a cross between a 1980s-era digital alarm clock and an ornery robotic duck. I recognized it immediately as the characteristic siren of the Emergency Alert System.
Published 03 August 2012, 12:53 EDT

I was sitting at my desk last week, typing up a piece about one thing or another, when the Sprint Galaxy S III alongside me flickered to life and announced a text message. But I knew right away that this wasn’t any ordinary text. Instead of the usual SMS annunciator tone, the phone was bleating out a wailing klaxon, a cross between a 1980s-era digital alarm clock and an ornery robotic duck. I recognized it immediately as the characteristic siren of the Emergency Alert System.

For non-U.S. readers, a definition is in order. The Emergency Alert System (EAS) is, according to the U.S. Department of Homeland Security, “a national public warning system that requires broadcasters, cable television systems, wireless cable systems, satellite digital audio radio service (SDARS) providers, and direct broadcast satellite (DBS) providers to provide the communications capability to the President to address the American public during a national emergency. The system also may be used by state and local authorities to deliver important emergency information, such as AMBER alerts and weather information targeted to specific areas.”

Like most Americans of my generation, I’d grown familiar with the EAS tones through constant exposure to them on TV. As a child, my Inspector Gadget or Sesame Street viewing sessions would be interrupted at least once a month by the ominous dual-sine-wave “attention signal” of the EAS (then called the Emergency Broadcast System), followed by an announcement letting all and sundry know that “this is only a test.”

Despite the fact that the EAS has never been used for a true national emergency, its constant readiness testing ensures that most Americans can instantly identify its distinctive alarm tones. So I knew exactly what the sound was when it went off next to me last week. I was just confused that it was coming from my phone. I also knew I wasn’t getting a call from the President, which is good because I was busy.

NWS, I knew, stood for National Weather Service, and the clouds rapidly gathering outside my window told me the message was no mere test. Sure enough, within five minutes, the grey afternoon had settled into something closer resembling the black of night, and amid the crackling of furious thunder, the street outside my door turned into a raging river of flood waters.

Fortunately, I was unharmed. The storm soon subsided and, as President Morgan Freeman might say, “the waters … receded.” I returned to writing my piece, but soon found myself wondering a few things. I wondered when wireless carriers started providing National Weather Service alerts, because I certainly hadn’t signed up for them. I also wondered why, though I had several phones powered on at the time, only my Sprint device chose to alert me to the impending lethal downpour; my Verizon devices, content to watch me drown with their Droid eyeballs, had sat silent. I went in search of answers.

The answer to the first question came relatively easily, courtesy of a helpful Twitter follower and a link to Sprint’s Buzz About Wireless community message board. There, I found a press release from November 2011, wherein Sprint proudly declared that it was “the first U.S. carrier to offer Wireless Emergency Alerts on its mobile network.” Wondering about the nature of an emergency alert that demanded so many capitalizations, I clicked a little further and found the official definition:

Wireless Emergency Alerts (WEA), also known as CMAS, is a part of a national alerting system called IPAWS (Integrated Public Alert and Warning System) that enables emergency management officials to rapidly disseminate the warnings and safety information via text alerts to wireless phones based on the phones’ geographic location.

The  Federal Emergency Management Agency or FEMA  is responsible for receiving the alerting information and forwarding the alerts to participating wireless carriers such as Sprint.  Such alerts may come from the President of the United States; the National Weather Service, state or county public safety officials.  This system is integrated into the same national alerting services that serve television and radio today.

As well as a helpful graphic: 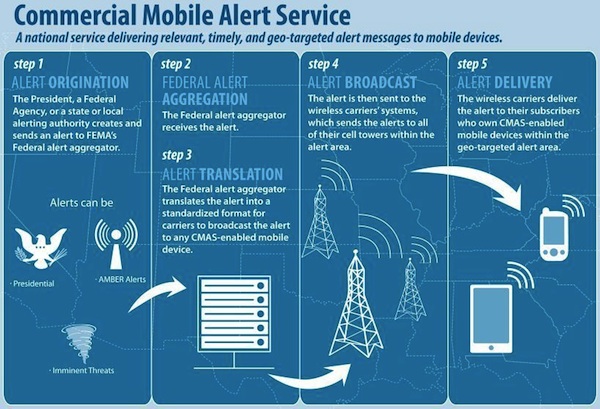 Some more research over at CTIA’s website uncovered a few more helpful tidbits, such as the fact that Wireless Emergency Alerts aren’t text messages in the traditional sense: they’re point-to-multipoint “text-like” messages that aren’t affected by network congestion, won’t be stopped by SMS blocking settings, and carry distinct iconography.

In all, it’s surprisingly simple and well-thought-out. The official nature of the government-sponsored communication also explains why the EAS alert tone was being used as a notifier. What I’d first thought was a cute trick on Sprint’s end was actually a component of the same system that ensured my childhood self I’d be given instructions “if this were an actual emergency.”

Furthermore, the system just makes a whole lot of sense. Of course I want to be notified in case of a local emergency, and I want that notification delivered to the device I keep on my person at all times, not just over a TV or radio that might not even be turned on. And I have to believe most people would agree. Knowing about emergencies happening nearby is a good thing.

So why was my Sprint phone the only one to pipe up? Sure, the third-largest U.S. carrier’s press release said it was the “first” to offer such a service, but that shouldn’t mean “only.” CTIA’s website had only this to say: “To confirm Wireless Emergency Alerts are available in your area and your device is capable of receiving the alerts, please check with your carrier.”

I didn’t need to check in with Verizon Wireless directly; a story posted by eWeek several months back reveals that U.S. wireless carriers were all given a 28-month period, starting in December 2009, to “set up implementation of the system,” with participating carriers including “AT&T, Sprint Nextel, T-Mobile, U.S. Cellular and Verizon Wireless.”

So while I should have received the messages on my Verizon phones as well, I may have been stymied by specific hardware limitations. It seems the software package that Wireless Emergency Alerts require hasn’t been pushed to all smartphones yet. According to eWeek, supported models as of May only included “Motorola Droid models; LG phones such as the Cosmos, Revere and Enlighten; and the rugged, push-to-talk Samsung Convoy 2.” Similar to the situation with official Android updates, my Galaxy Nexus simply wasn’t invited to the party.

Thankfully, that’s bound to be a temporary situation. Pushed by a mixture of public concern and government oversight, software updates to existing phones and progressive releases of newer devices will ensure that soon, every mobile phone user should be able to receive Wireless Emergency Alerts.

Whether that’s a good thing or not depends on your point of view; while I think it’s a handy and vital emergency service, there are others who don’t share my opinion. Emergency-response blog A.W.A.R.E. conducted an informal Twitter survey following the same wave of WEA alerts that brought the service to my attention -in fact, one of the photos I posted on Twitter, showing my Galaxy S III in alert mode, is featured in the article. A.W.A.R.E.’s quick rundown of public Twitter responses showed an interesting mixture of excitement, anger, and apathy toward the new service. It’s handy, then, that there are settings available in the Messaging app allowing users to customize their notification preferences.

I, for one, am glad to have a phone that wants to keep me safe in emergencies. And I’m glad that even the devices that sat stoically silent through this last one did so out of incompetence that will soon be rectified, rather than malicious indifference. The Wireless Emergency Alert system is another example of technology being leveraged for the greater good of the public, of ubiquitous mobile devices being used to enhance the safety of people far and wide.

Have you received an emergency alert on your mobile device? Do you love or hate the idea? For our non-U.S. readers, does your country offer something similar? Let us know in the comments!

The upcoming Redmi phone will sport an in-display fingerprint sensor and will come equipped with a 48MP primary camera at the back.

We have new live images of the upcoming Honor X10 four days ahead of its launch, and we also get more alleged leaks of its specs
YouTube 1.8M
Facebook 569K
Twitter 196K
Instagram 133K
RSS