What can you buy for $200? When it comes to gadgets, the list is big but not that fancy. Sure you can buy a subsidized flagship smartphone, but your total cost of ownership goes far beyond those $200. I’m referring to the products that you can consider yours after placing two Benjamins on the counter. As of a couple of weeks ago, your options were limited to probably the cheapest iPod Touch, or some accessory for a product you already own.

A price tag is definitely a powerful thing, but it’s also something most people fumble with when faced with cheap-quality products, and that was even a harder choice when it came to tablets since the $200 models were, in a word, terrible. If you wanted a good quality tablet that cost more than twice as much, the question of whether you needed a tablet or not was always there. Even if tablets were relatively cheap, you could still find cheaper computers, and those that already owned a computer were faced with yet another substantial investment in something they still didn’t know if they needed or not. The debate focused on the fact that a computer could do far more than a tablet can do, which is actually true. I’d have friends approach me and say that they didn’t understand why anyone would ever buy two products that cost almost the same and did similar functions, if they could just own the one that did more than the other? Sadly, if the tablet wasn’t cheap enough to not compete with a computer, then the question would never be answered.

Then came Amazon, with their incredibly cheap but limited Kindle Fire. The product was good, but unlike the iPad, it wasn’t something that Amazon envisioned as a computer replacement. They simply wanted to sell you an eReader with an LCD screen that did a good job in making you buy more of their services. The UI is so locked-down to Amazon product consumption that I still consider it a more of an expensive eReader, and not a tablet. Call it a different product category if you may.

What I was never prepared for though, was for my personal reaction when Google launched the Nexus 7. Sure we were all expecting it after so many of the rumors we deal with every day, but let’s just say we all underestimated Google’s approach to the unanswered question. As I watched the keynote, saw the features and then heard Hugo Barra say that it was available for pre-order right then, I immediately began hitting refresh on Google’s Play Store. My reaction was immediate, impulsive and to be honest, kind of funny. I’ve always been the type of buyer that waits before I buy any product, but everything about the Nexus 7 is different and I just had to have it.

If you’re on the ropes right now, still debating if you need one or not, let’s go through the reasons why I bought mine. 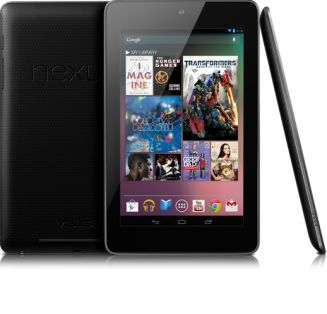 What makes Google’s new Nexus 7 such a paradigm shift in consumer behavior is that the question is kind of over. When faced with a high-end tablet that will only cost you $200, the question stops being if you need a tablet and quickly shifts to “why not?” The tablet is small, beautiful and simply quite the steal for such a low price. And the best part of it is there are no hidden fees; you can limit your purchase to the tablet, fill it with free apps and keep your total cost of ownership at those $200 unlike the Kindle Fire where the screen is nothing without your purchase of Amazon’s next service.

The funny thing is that the Nexus 7 just didn’t allow me to think. My reaction was simply as impulsive as anybody else’s reaction would’ve been when shown the dessert menu on any restaurant. You don’t need to always eat dessert after lunch, but the menu just makes everything hard to resist. For the same amount of money that I usually spend in gas every month, I was offered the option to get Google’s next new baby, and even though I’m no Android Fan Boy, I just couldn’t contain myself.

I was personally never a fan of the 7-inch form factor. I read a couple of magazines and do a lot of web browsing and I just felt that the experience was cumbersome. I had enough size in my pocket with a 4.7-inch HTC One X, so I felt it was unnecessary to carry the extra bulk of a larger screen that’s not really that much better than the smartphone I already carried. The 10-inch form factor was the sweet spot for me, since it was close to a computer, but not as bulky.

Sadly that scenario is not always the case. Even though I’ve owned all three versions of Apple’s iPad, I still felt the need to buying a Kindle. One of the things I do the most is reading books, and holding a 10-inch tablet to read a book is simply not convenient. When trying to play games, the extra canvas of a 10-inch tablet is always great to have, but again, the weight just makes the experience tiresome after just a couple of minutes.

I’ve already spent a week using the Nexus 7 and I’ll admit I can’t put it down. It’s just so convenient when compared to an iPad. Surely I’ll never read a magazine on it, but it’s perfect for reading books or playing games, is far more powerful than a Kindle and far less bulky than an iPad. I would always need a backpack to carry the iPad around whenever I traveled or simply went to a coffee shop. Since I drive an SUV and theft is common where I live, I would always be forced to figure out ways to hide the backpack under the car seat when at a mall or at a store. With the Nexus 7, I can carry it easily in my back pocket as I walk, or leave it in the glove compartment of my car if I’m at a store. Surely I don’t have $200 to spare, but I’m far less worried about loosing my Nexus 7 than if my LTE 64GB iPad got stolen, which also makes the experience of carrying it around so soothing.

Have you ever tried Android 4.1 Jelly Bean? If you haven’t, I suggest you do. As much as I tried to keep my love for Android a secret before, I simply can’t any more. Jelly Bean is what Android should’ve always been like since day one, and you get it with the Nexus 7 out of the box. The Nexus 7 sadly doesn’t have the brightest screen in the world, but it all just sinks into irrelevance when you start using it and notice just how fast it is.

The greatest thing about owning Nexus products (except the Verizon Galaxy Nexus) is being first when it comes to software updates. There’s no middleman between you and the next version of Android. You also don’t have to put-up with UI skins that have seriously become more of a problem than a solution since Google released Ice Cream Sandwich. I trust in Google’s software engineers far more than I do in the small software departments that hardware OEMs own, so if my advice serves you well, I’d say the best way to Android (if you could ever use it as a verb) is with an unlocked Nexus product.

A couple of months ago, friends would always ask me if they needed a tablet since they already owned a computer. My answer was always to ask them back if they really needed a computer and not just a tablet? Surely a tablet was never designed for content creation purposes, but if all you do is chat, surf the web and Facebook, then you don’t really need a computer.

Still, the Nexus 7 has made my response different. To answer your first question, no, you don’t really need a Nexus 7. It won’t do anything better than your computer or even an iPad. What makes it so special is that the gap between owning both a computer and a tablet has been bridged. When faced with a great tablet that’s this cheap, then I wouldn’t even debate the question anymore. Just buy a Nexus 7. Even if you don’t need it, it’s sure great to have it.