Lenovo’s YOGA Tab series of consumer Android tablets has always been pretty unique. Today an updated set has been announced and the Tab 3 versions bring some new innovations.  First off the Tab 3 will be available with an 8 inch screen or a 10 inch screen. That’s the major difference between the two.  The 8 inch one will also have up to 20 hours of battery life with its 6200 mAh battery versus the 10 inch Tab’s 18 hours with an 8400 mAh battery. Both will have a 800 x 1280 pixel resolution screen, quad-core 1.3 GHz (Qualcomm APQ8009) processors, Dolby Atmos audio, Android 5.1, an 8 megapixel camera 1GB RAM, 16GB Storage, MicroSD slot, Bluetooth, WiFi, and LTE (optional on the 8″ TAB 3). Both tablets also support the very cool “any pen” technology lets you use any conductive object to interact with the screen. It doesn’t have to be your finger or a special capacitive stylus or a special electromagnetic digitizer stylus like some other tablets use. You could use a spoon if you wanted to. The disadvantage to this technology is that it does not do palm-rejection though, so you still can’t rest your hand on the screen like you could with a Wacom or N-Trig based stylus. 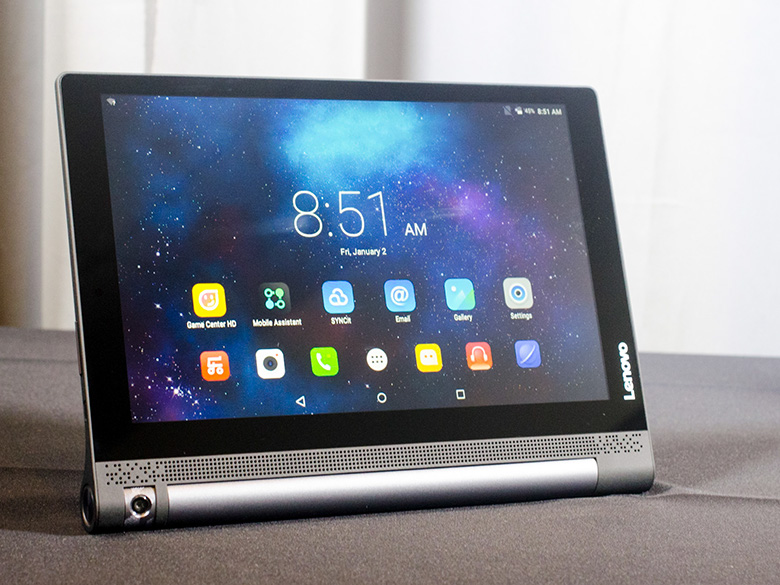 One of the coolest things about the Lenovo YOGA Tab series is the kickstand that rotates out from the edge so that you can set it up on a table for easier viewing.  Here you can see the front facing speakers at the bottom along with a new rotating 8 megapixel camera. 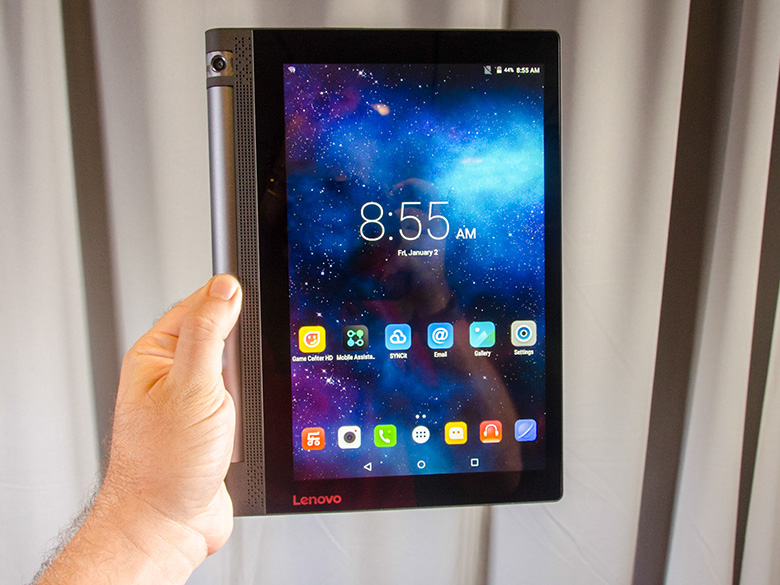 The thick cylindrical edge of the Tab 3 is where the battery is stored in addition to the camera and kickstand, but it also makes a really great place to hold the tablet. Gripping it here is just so much more comfortable than trying to hold a thin bezel edge like most other tablets make. 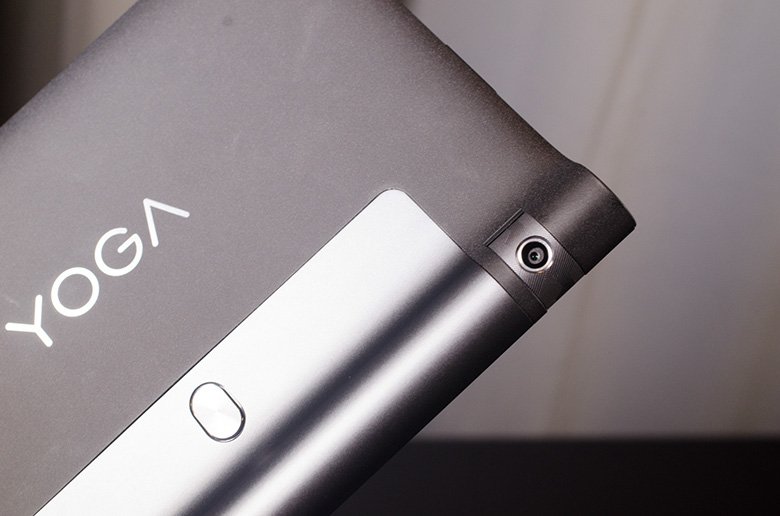 The rotating camera is a great idea. We’ve seen this type of mechanism on smartphones back around the turn of the century, but with Lenovo’s big battery cylinder, it makes a lot of sense. You can now rotate the camera 180 degrees from the front to the back depending on what you want to take a picture of. Of course, we still don’t recommend using this in public since holding a big tablet screen up in front of everyone is very obtrusive.  You can also see here a button on the kickstand that releases it with a bit of a spring.  Previous versions required a force-turning of the cylindrical area, which wasn’t always that obvious. Now that there’s a button, you can release the kickstand and use your fingers to rotate it out. The hole around the button also means you can hang it on a hook somewhere. 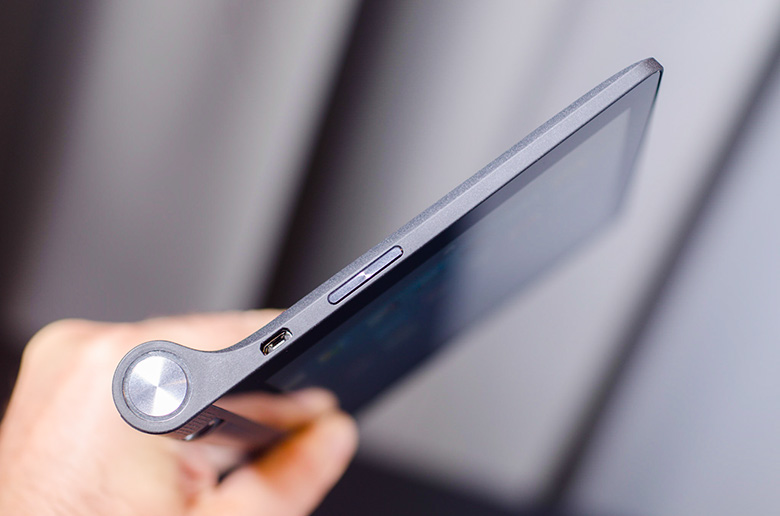 Here’s a good view of how thick that battery cylinder is. This end also shows the power button, volume control, and Micro USB port.  If you want to lay the Tab 3 on a table, obviously it won’t lay flat, but the thicker cylinder on one side makes for a really nice angle that will slope the screen towards you. 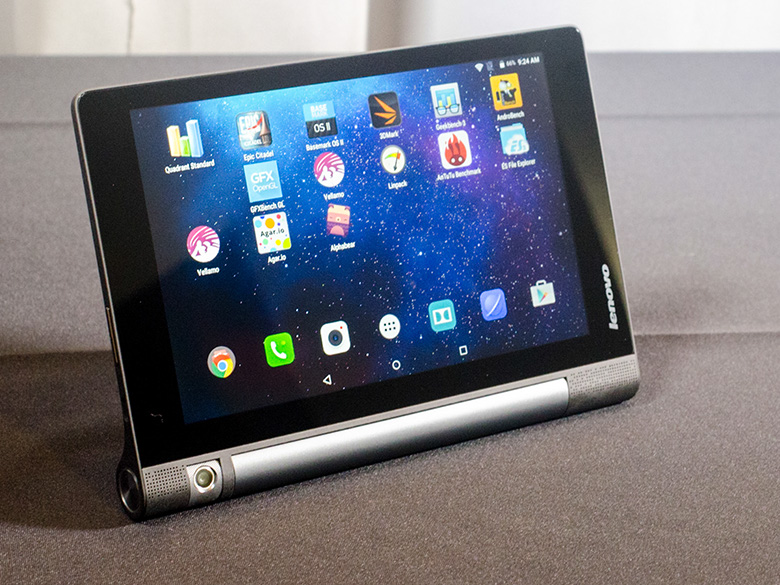 The speaker layout of the 8 inch version is slightly different, but they’re still up front. One thing that may be a disadvantage with the rotating camera lens is that it’s so close to the bottom if you’re setting the tablet up on a table for video calling. I imagine this would make your callers feel looked-down-up and maybe even reveal what’s going on inside your nose. 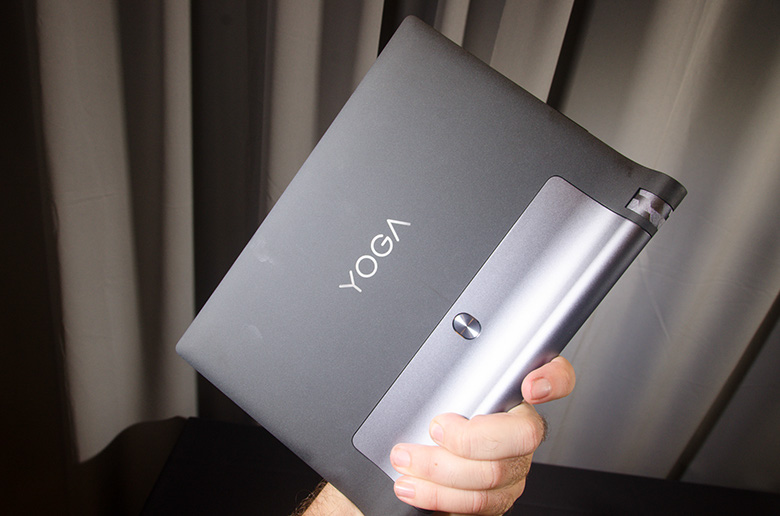 What do you think? Are you going to be in the market for a Lenovo YOGA tab 3 this holiday season?

The ASUS Zenfone 8 Mini has reportedly received TÜV SÜD certification. While it doesn’t reveal much about the upcoming mini flagship, it does give a look at the offering in terms of charging capabilities.

Samsung’s latest flagship has some power-hungry parts. Pick one from this list of best Galaxy S21 Ultra battery case options to keep it going!