Oh Snapdragon 810, will you ever catch a break? While on paper the SoC looks like an obvious choice for bringing flagship-level performance to a new smartphone, the chip’s arrival on the market has been maligned by recurrent reports of excessive operating temperatures. It seems like every few months new voices arrive to warn of the 810’s thermal woes, only for others to step up and insist this really isn’t a problem, and that any previous overheating issues have been addressed in the chips landing in currently available phones. Well, today Japan gets its hands on the Xperia Z4 (while the rest of us await the start of sales for the essentially-the-same-thing Xperia Z3+), and the 810 overheating panic seems to be back in full force.

New Z4 owners are already taking to social media to complain about their hotter-than-they’d-like handsets. They’ve been posting screenshots of diagnostic software revealing on-device temperature readings in the 135-155F range.

It seems that even retailers are worried about how hot the phone is getting: a sign in a DoCoMo store (below) warns users to periodically power-down their devices and conduct regular backups in an effort to keep temperatures in check and avoid data loss in the event of an overheating-related crash.

Whether or not running hot impacts the Z4’s commercial success – and long-term user satisfaction – remains to be seen, but from this launch it sure feels like the Snapdragon 810’s struggles aren’t over just yet. 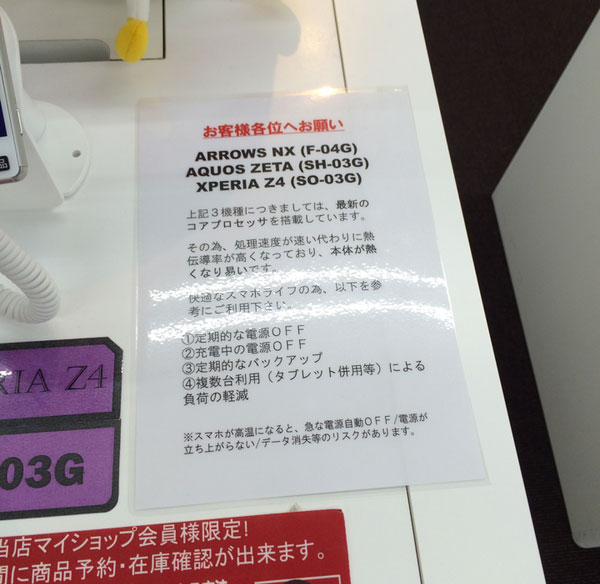 Check out the best deals on the latest MacBook Air, and several Android smartphones from OnePlus, Google, and more

Check out the latest deals, which feature the latest iPhone 12 lineup, the OnePlus 8T, and several watches on sale

Leica's partnership with HUAWEI is rumored to end this year, and the German brand might…