We’re only one day away from the official India announcement of the Xiaomi Redmi Note 5 and Redmi Note 5 Pro, the former of which is apparently identical to the China-only Redmi 5.
Published 13 February 2018, 03:49 EST

There’s been a lot of confusion surrounding Xiaomi’s first low-cost “full screen” smartphones, which went official in China back in December as the Redmi 5 and Redmi 5 Plus, despite rampant Redmi Note 5 speculation at one point leading up to their launches.

Conflicting reports returned with company confirmation of a February 14 event in India, officially teased by using the “Give me 5” tagline. Some people simply expected the original Redmi 5 duo to expand to the world’s second-largest smartphone market, while others anticipated entirely new devices.

The truth appears to lie somewhere in the middle, according to a couple of very convincing spec sheets prematurely leaked on Twitter earlier today. These unusually detailed promotional materials confirm “all-new” Xiaomi Redmi Note 5 and Redmi Note 5 Pro handsets are coming, although technically, the former is just a rebranded Redmi 5 Plus. 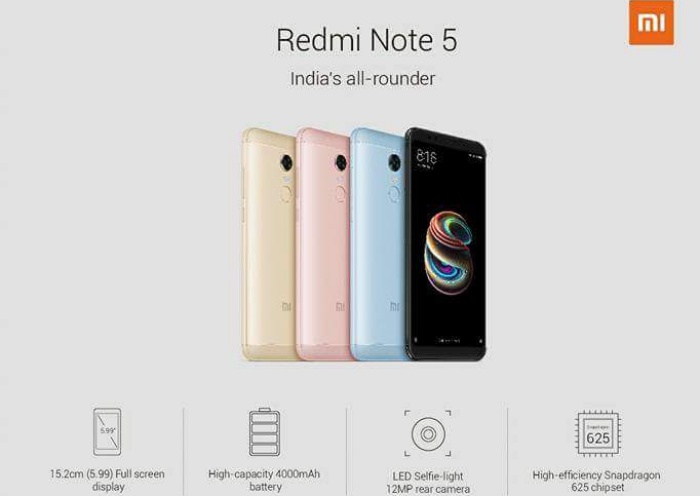 We can’t find any difference whatsoever between the China-only Redmi 5 Plus and “India’s all-rounder”, as the Redmi Note 5 packs a Snapdragon 625 processor, your choice of 3 or 4GB RAM, with either 32 or 64GB internal storage, also making “great selfies better” with a 5MP LED front camera. That single 12MP rear shooter is still there, and the 18:9 5.99-incher creates an “incredibly long lasting experience” thanks to a high-capacity 4000mAh battery.

The Xiaomi Redmi Note 5 Pro is a different beast altogether, as the world’s first commercial product with a Snapdragon 636 processor under the hood. Its Kryo CPU cores are paired with up to 6GB RAM, and a 4000mAh cell is still in charge of keeping the lights on.

Without a doubt, the most notable upgrades come in the imaging department, where the 5.99-inch “full screen” Redmi Note 5 Pro offers a pretty remarkable 12 + 5MP dual rear-facing camera setup, as well as a 20MP front snapper with LED selfie-light. Who’s ready to show Xiaomi some love this Valentine’s Day?

Check out the latest deals from Amazon.com, where we find more discounts on the Samsung Galaxy Note 20 series, the OnePlus 8 Pro and more

It seems that Samsung was close to supply foldable displays for the Huawei Mate X2, but in the end, Huawei decided to walk a different path
YouTube 1.8M
Facebook 570K
Twitter 197K
Instagram 133K
RSS