In order to keep retail pricing relatively low, the Xiaomi Redmi Note 4 is believed to combine a dual rear camera with a Full HD screen, among others.
Published 18 July 2016, 06:28 EDT

We don’t often extensively cover pre-release gossip regarding mid-enders unlikely to reach Western shores, but the Xiaomi Redmi Note 4 is special. Its manufacturers have confirmed there will be an advanced dual camera slapped on its back, similar to the Huawei P9, Honor 8 and almost surely, the upcoming iPhone 7 Plus.

It doesn’t sound very special in that context, though the Redmi Note 4 could well and considerably undercut the retail pricing of all existing and near-future dual rear cam “flagships.” Granted, it may not be quite as affordable as the Redmi Note 3 or Note 3 Pro, but we still expect it to fall in the sub-$200 market segment.

The latest leak, purporting to show part of the handheld’s retail box, lends credence to the aforementioned theory, hinting at a spec sheet including a MediaTek Helio X20 processor with ten CPU cores clocked at between 1.4 and 2.3 GHz, 5.5-inch display, 13 and 5MP snappers, and 4,100 mAh battery capacity. 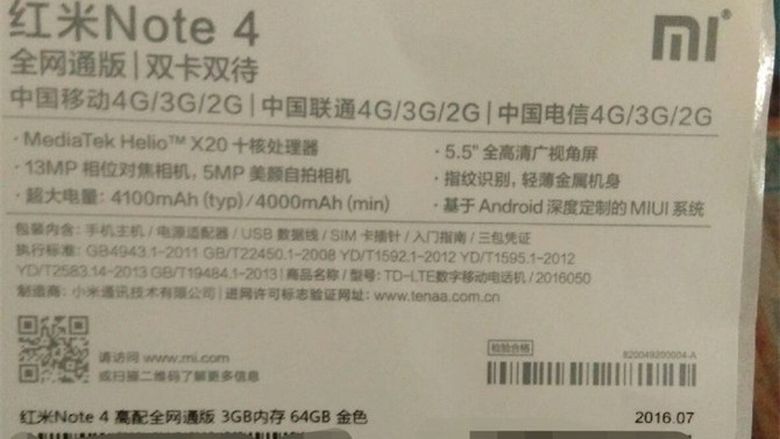 Not exactly entry-level features, but far from ultra-high-end material, with screen resolution likely capped off at 1080p, plus 3GB RAM and 64GB internal storage probably in tow. Also, a fingerprint sensor. What we don’t understand is whether both rear cameras are supposed to carry 13 megapixels. Maybe one will offer 13, and the other less? July 27 should answer all our questions.