Samsung is not happy about losing to Xiaomi in India’s Q4 2017 smartphone shipment battle, highlighting sales to end users are way more important, but the latest Counterpoint research supports Canalys’ findings, adding another stat to the equation that the chaebol isn’t going to like one bit.

It turns out that the region’s fastest-growing smartphone vendor, at a whopping 259 percent overall in 2017 compared to 2016, also held last year’s top two places on the model popularity chart.

The Xiaomi Redmi Note 4 and Redmi 4 were reportedly the top-selling smartphones in India during CY (calendar year) 2017, followed by the Samsung Galaxy J2, OPPO A37, and Xiaomi Redmi 4A. 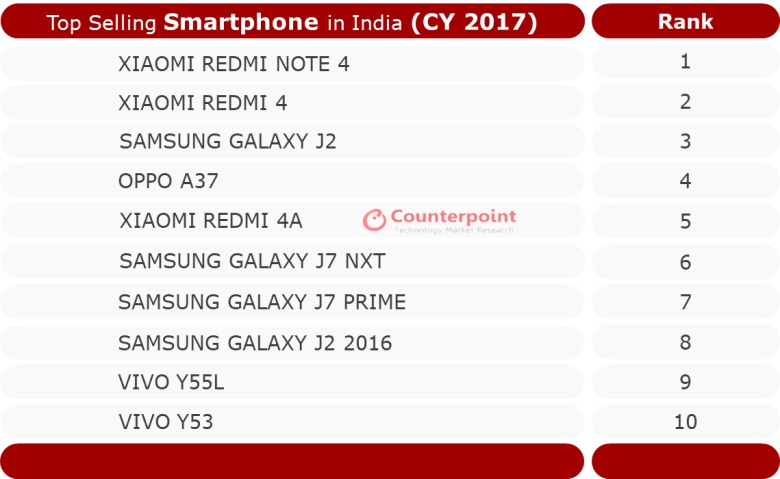 Samsung placed sixth, seventh and eighth overall with the Galaxy J7 NXT, J7 Prime, and J2 2016, while Vivo wrapped up a top ten composed exclusively of budget-friendly, low to mid-end devices with the little-known (in the West) Y55L and Y53.

Still, the world’s leading smartphone manufacturer was number one in shipments in India as well for the full year, with 24 percent market share, while Xiaomi made a big leap from 6 to 19 percentage points to finish second. Vivo won the bronze medal, followed by OPPO and Lenovo in fourth and fifth place respectively, with the three Chinese OEMs practically tied for the last spot on the Q4 podium, at 6 percent share.

Xiaomi managed to beat Samsung by a couple of percentage points in the October – December 2017 timeframe, according to this new Counterpoint study, playing a key role in the remarkable growth of the nation’s “affordable mid end segment.”

But Samsung probably had the upper hand in margins, contributing to a 20 percent year-on-year progress for the “premium segment”, alongside OnePlus and Apple. The chaebol also easily won the 2017 feature phone trophy, with 21 percent share, although iTel and Jio are quickly becoming serious challengers for that particular title.

Believe it or not, “dumb phones” were up an astonishing 55 percent overall during Q4 2017, while India’s smartphones gained a healthy 12 percent themselves.

Twitter users on the Android side of things can only join a Spaces session, but they can’t create a session as a host at the moment.

Today’s best smartphone deals come from Amazon, Samsung, and OnePlus, where we find the Galaxy S21 series, the OnePlus 8, and more on sale