Xiaomi Redmi 3 possibly benchmarked as ‘Kenzo’ with Snapdragon 617 inside

Although it might seem too early to some, the Xiaomi Redmi 3 is likely right around the corner, with Snapdragon 617 processing power and 2GB RAM in tow.

While it may look like Xiaomi already covered its low-cost bases in both the smartphone and tablet markets for the next few months or so, the up-and-coming Chinese device manufacturer appears to be working on yet another non-flagship Android handheld.

Codenamed Kenzo, this just stopped by the Geekbench Browser to probe its pre-release speed, and everything seems about ready for primetime. The motherboard is listed as “msm8952”, which suggests a Qualcomm Snapdragon 617 processor runs the hardware show, and although there are only six cores to it, it somehow manages to trump an octa-core derivation of the same chip found under the HTC One A9’s hood.

Granted, the 1,420 and 3,420 single and multi-core scores respectively of the mysterious Xiaomi phone don’t exactly a high-ender make, but at the right price, they’ll sure get your heart racing. Our best bet concerning the SD617 mid-ranger’s identity is a Redmi 3, following in the footsteps of the original Redmi 2 from back January, as well as the 2A, 2A Enhanced Edition, Note 2, and Note 3. 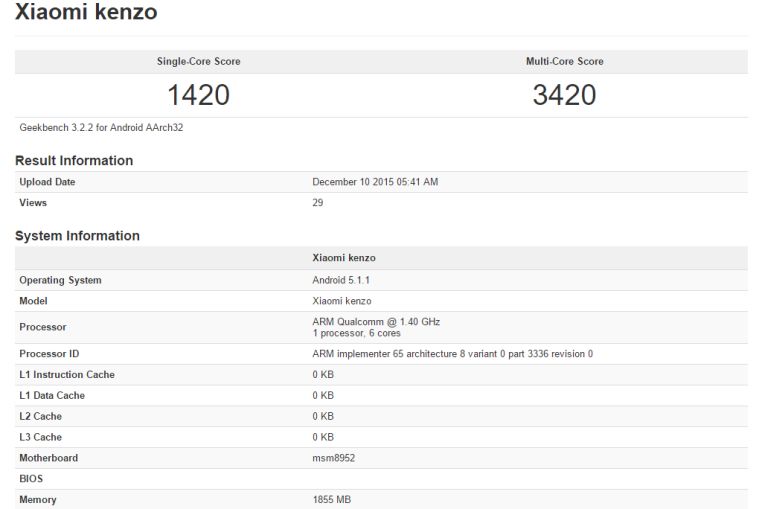 Pretty crowded lineup, so hopefully, the Kenzo will be able to stand out from the recently unveiled Redmi Note 3 with something besides a different SoC. The only other features Primate Labs reveals are 2GB RAM and pre-installed Android 5.1.1 Lollipop software, no doubt with MIUI 7 on top, so we can definitely expect sub-$150 unlocked pricing.

Here’s a crazy theory – what if the Xiaomi Redmi 3 were to come with a 5-inch or so 720p screen, 8MP rear-facing camera… and retail value around the magic $100 number? Wouldn’t that be something special?