Xiaomi, OnePlus fingered for high-radiation phones by German regulator [U]

A German radiation regulator conducted updated tests on many major phones and found many to break the country’s SAR limits.
Published 10 February 2019, 21:15 EST

Recent testing by the German Federal Office for Radiation Protection or BfS has found the highest levels of specific area radiation coming from phones made by Xiaomi and OnePlus.

The data, compiled by Statista and seen through Digital Trends, shows that the globally-implemented Android One device, the Xiaomi Mi A1, recorded an SAR reading of 1.75 watts per kilogram. In second place was the OnePlus 5T at 1.68W/kg. In fact, Xiaomi’s Mi Max 3 and the OnePlus 6T took third and fourth with readings only slightly 1.6W/kg. 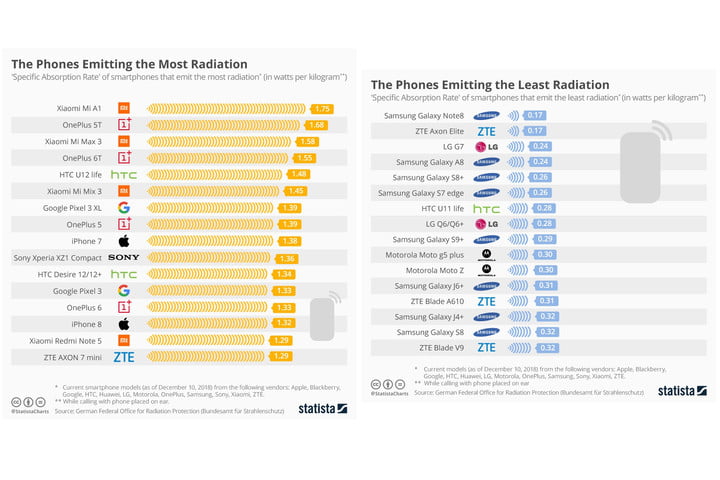 Most of the least-emitting phones were made by Samsung — the Galaxy Note 8 bottomed out with 0.17W/kg. LG, Motorola and ZTE getting at least two slots each. All readings drawn through the BfS were 0.32W/kg or less.

The longstanding scientific debate over whether cellphone radiation is harmful to humans continues to be argued as the BfS issued a release last week discounting a US National Toxicology Program report finding that such radition could induce cancer. The BfS stated that testing was done on rats with radiation at far higher levels proportionate to what humans would experience on a daily basis.

That said, in order for a phone to receive a “Blue Angel” environmental friendliness certification in Germany, they must test below 0.6W/kg — a far cry from the FCC’s 1.6W/kg limit and a clear sign that standards aren’t being bridged.

[alert variation=”alert-warning”]Correction: An earlier version of this article stated that the Xiaomi Mi A1 and OnePlus 5T broke the FCC’s SAR limit of 1.6W/kg.

However, FCC standards specify that limit for a 1 gram sample of human tissue. The Conformité Européenne, which regulates such safety standards in the European Economic Area, advises a limit of 2W/kg over a 10 gram sample.

Furthermore, certain governments suggest different methods of SAR testing for their certification. Therefore, it is not accurate to compare the measurements to different standards. Pocketnow regrets the error.[/alert]

This won’t be the first time Xiaomi will be rebranding one of its Redmi phones as a Poco phone if this happens.