If you are looking for a phone with a gorgeous design and premium feel, but you also have some budgetary limitations and are living in 2014, we have some really good news for you: the Xiaomi Mi Note might just be the phone you’re looking for. We had the opportunity to take it for a test drive courtesy of our friends at Efox-shop (where you can grab your own – use coupon code “pocketnow” for $10 off until June 30). The price tag on this phone accurately reflects what you’ll be getting. We tested this phone for three weeks in the Chicago area on AT&T and on US Mobile. It’s not the highest end phone you’ll find on the market. It has such a gorgeous design that’s really where the Xiaomi Mi Note review needs to start, so let’s dive in.

Pros/Cons · Conclusion · Scored For Me 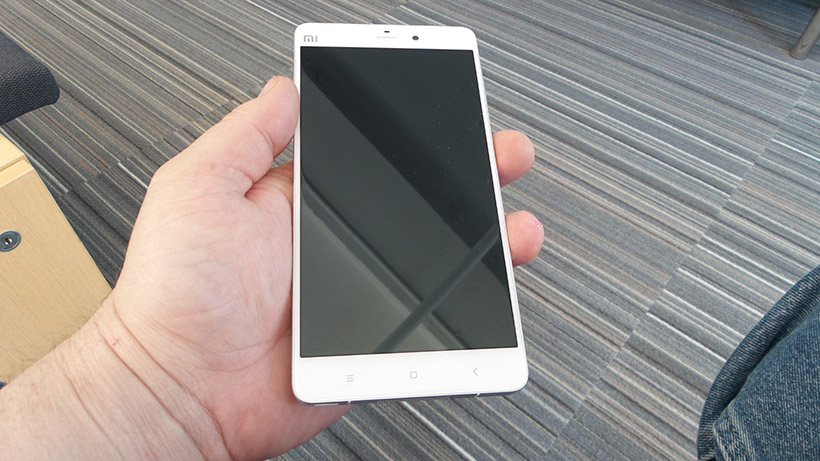 The first thing you’ll notice about the Mi Note is how shiny it is. That’s not a metaphor; the phone is actually shiny. The handset is basically a circuit board sandwiched between two curved panes of glass and an aluminum frame. The curved glass is reminiscent of the Note Edge screen that we had the opportunity to carry, but less pronounced. The 7mm frame curves down to a scant 4.5mm rim on the sides. Up on top you’ll find your headphone port and a noise-cancelling microphone, and on the bottom, you have a micro-USB port and bottom-firing speaker. On the right of the phone there’s the the volume rocker and power button, and on the left, just a lonely dual-SIM tray. Poor little SIM tray. 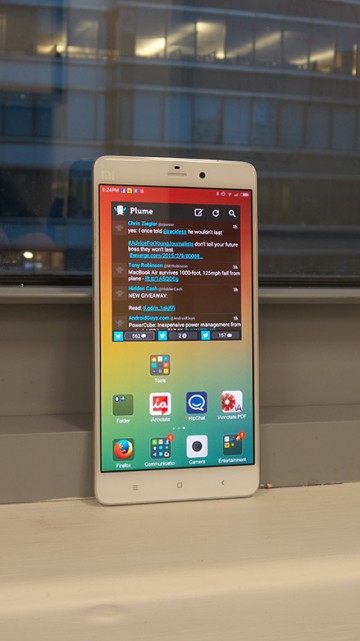 The phone is very slick, both in terms of looks and in terms of actually holding it. It’s a very slippery phone. The glass bottom slides very easily over just about any surface – wood, tile, laminate, etc. – and the phone actually slid off our desk during the first week with it due to miniscule vibrations coming from a nearby desktop tower. This was before we learned to pay very close attention to where the phone was placed, and where it was a couple of minutes later. Spoiler alert: that was not always the same place.

In the hand, though, the phone doesn’t feel any more slippery than any other model. It’s only super noticeable when you’re setting it down or picking it up; you keep checking to make sure it’s not covered in baby oil or soap.

The screen of the Mi Note is a 5.7-inch full HD display with a resolution of 1920 x 1080. This adds up to a 386 ppi pixel density, which is not too shabby, but not even close to the 524 ppi of the Note Edge, which recently left our desk. That’s not bad because the screen itself is bright and sharp and not a point of criticism in our eyes. But it does fall in line with the rest of the hardware: Snapdragon 801 and Corning Gorilla Glass 3, which fall into the category of “last year’s specs”. Maybe they’re late last year, but still last year. It’s also worth mentioning that the phone does not have microSD storage capability. What you buy is what you get.

The bottom-firing speaker is loud and clear. During our tests, we put all manner of sound through it. The speaker quality is very good, if a bit tinny, and funny enough it seems like volume increases considerably from 0 up to 75 percent, and from there very gradually. Going full bore doesn’t seem to add much volume to the mix, but does cause the speaker to start noticeably peaking. Keep it at 75-80 percent and you’ll be just fine. That being said, the inability to max-out a speaker without the noise is a drawback. Honestly, I wish Xiaomi had just drawn a line at 80 percent and said, “this is 100. Adjust accordingly.”

The same goes for call quality on the speakerphone. The speaker is loud and clear even in less-than-ideal circumstances, such as expressway driving. Callers have no problem hearing, and vice versa; this phone communicates very well. You can see from the gallery below just how nicely built the handset is: 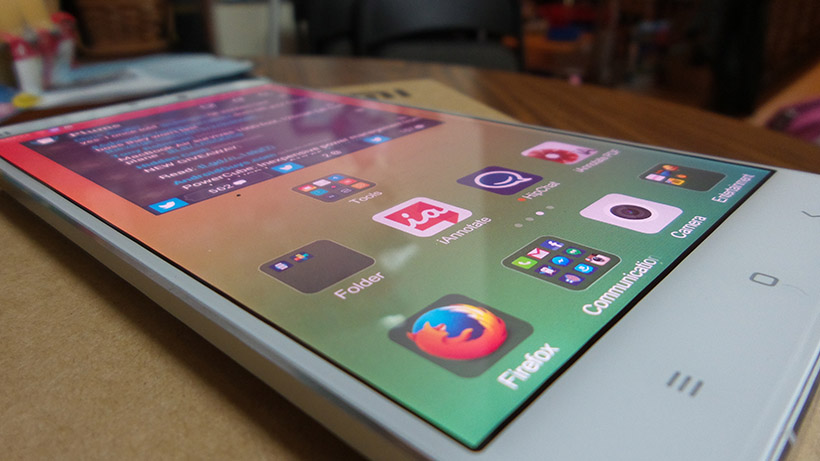 The software on the Mi Note has some quirks. MIUI 6.3.13 runs on top of Android 4.4.4. Some rumors suggest that Lollipop might be rolling out in a beta in the near future, but we take that with a grain of salt, lest we hear from Xiaomi. MIUI takes a little getting used to, especially on the Xiaomi Mi Note because a lot of the apps are in Chinese. That wasn’t a course we took in college, so a lot of the times we dismissed a notification, hoping it wasn’t something critical.

Overall, if iOS and Android had a baby, it would probably look a lot like MIUI. Noticeably absent is the app drawer: if you install a new app, it goes right onto the home screen, just like iOS. You can change positioning though, just like Android. You can include widgets on your home screen. The notification shade is very much like Android’s. Basically, MIUI is a lot like what iOS should be.

Our Mi Note (Chinese variant) does not come with the Google Play store installed, but it is available to add via a Google Services app that can be downloaded from the Mi Store. Reports indicate that international variants will have full Google Play services. Either way, once you have that installed, you’re golden – mostly.

Don’t misunderstand, you can install all the apps you want. We have Netflix, Google Maps, c:geo, Android Wear, and more, all installed and running. But it seems like some of the services we would normally get notifications for – GroupMe comes to mind – just won’t come through. Most notifications were there, at least. All of that can likely be fixed with a custom launcher, but it’s worth mentioning. 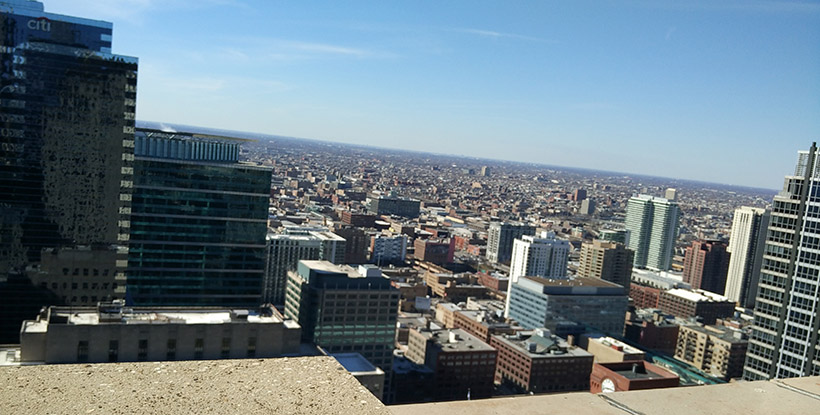 The Xiaomi Mi Note comes armed with two cameras. On the back, you’ll find a 13-megapixel shooter and the front sports a 4-megapixel selfie cam. Both cameras performed well and have a nice suite of software associated with them. Up front, the selfie cam is nice enough to not only include face detection, but age and gender detection as well. I’m quite frankly amused by this because this is a selfie camera; chances are the person taking the selfie knows the age and gender of the subject. Only bad can come of this. Our phone guessed one subject was five years older and another three years younger. If you’re on a first date, do you really want to take that chance when you pose in front of the Ferris wheel?

The main shooter, as stated, is a 13-megapixel camera with optical image stabilization that offers decent performance. We took all manner of photos during our test period. On the phone’s screen, these photos look great. When viewed at 100 percent size on a desktop computer, however, it becomes a different story. Photos start to get on the grainy side at 100 percent resolution. If one is used to posting photos to Facebook or Instagram, this is probably just fine. If you’re planning on printing out 8 x 10s for your living room – not so much.

The camera does come preloaded with some fun effects to play with, such as refocus, panorama, and what my son calls “Minecraft mode”.

Low light performance isn’t all that great. Taking photos with a flash isn’t much better, with pics looking horribly washed out. Your best bet in a low light scenario is to bust out “torch” mode where the LED stays on while you aim and shoot your photo. That produced adequate results, even if it was on the annoying side for your subjects. See below for no flash, flash, and torch mode, in that order:

The phone’s video performance is also OK-but-not-great. The Mi Note has trouble handling the jump from the brightness of the sky to surrounding buildings. Refocusing from far range to close-up also requires a manual adjustment. Frankly, we want our cameras to be a little smarter in these situations. The video mode also comes with slow-motion and fast (pseudo-time-lapse) settings.

Slo-mo sample from Pocketnow on Vimeo.

Overall, we found the camera to be average, but not great. Remembering the price tag will help. Being an Instagrammer will help even more. 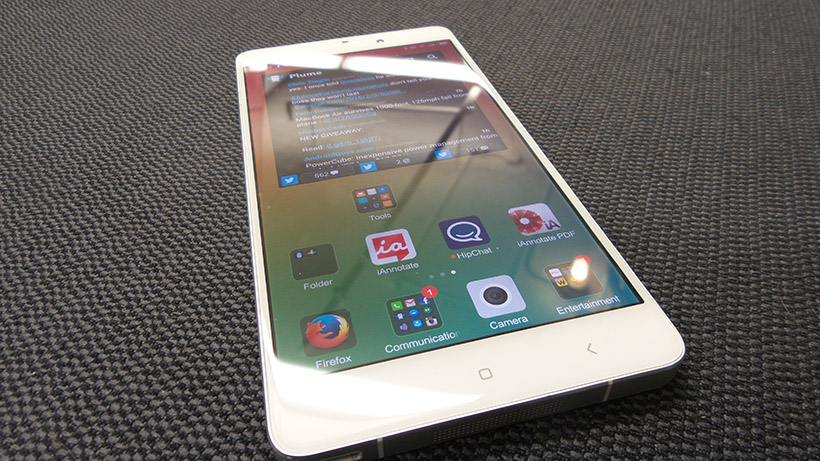 The Xiaomi Mi Note will handle anything you care to throw at it, whether that’s movie watching, gaming, or just a lot of Clash of Clanning. The Snapdragon 801 processor is a bit on the dated side with 805s and 810s out there, but it still solidly holds its own; it’s not like we’re editing videos on the thing. The 3GB of RAM gives this phone plenty to work with.

Battery life was acceptable for a phone of this size. Getting through a day of light-moderate “day job” use is the norm. Load up on some heavier processes like Netflix and yes, the battery life will suffer. You can expect to get a solid four and a half hours of screen-on time. It doesn’t quite measure up to similarly sized phones like the Galaxy Note Edge, but is still respectable, especially if you’re at work during the day and only hammering the phone at night. 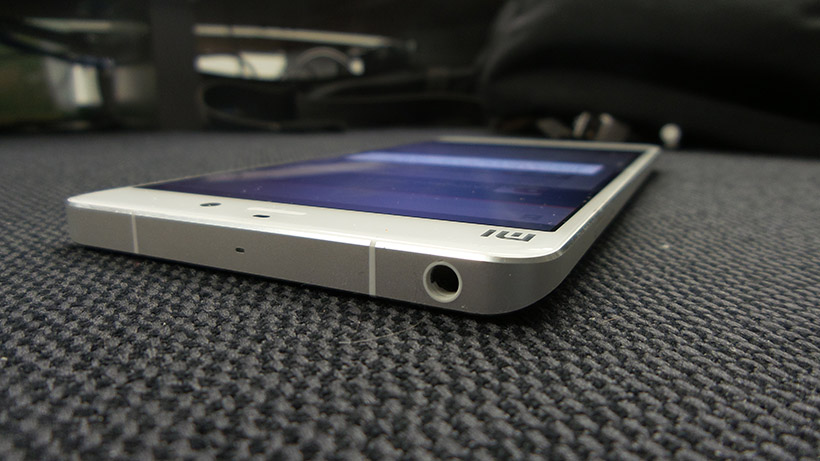 At the end of the day, what you’re left slipping into your pocket is a good phone, built with great materials, for a good/great price – depending on where you live in the world. It’s a great phone to hold in your hand and it stands out in a crowd. Unfortunately, that’s where the great stops. Everything else about this phone from the internals to the camera, to the software merely falls into the good category. Is that a problem? Not at all, but we don’t want to pretend this phone is anything it is not.

The outside covering is what makes the first impression and it will be a very good first impression. Remember that first date by the Ferris wheel? Well, she’s beautiful, fun, and boy are your friends going to be jealous when you show them her photo. But then you start to learn about her…quirks. She can only sleep on the right side of a bed and only when it faces east. She lives with her ex’s mother in law and what the hell is that all about? She believes forks are “for the rich” and speaking of which she hasn’t had a job since Clinton was in office.

The same goes for this phone. It’s initial impression is like “Wowza” but then you start to learn about the baggage. We still don’t know what half of those notifications were. You need to install Google Play services yourself. The battery isn’t replaceable and there’s no SD card expansion. If you live in the US, you’re stuck on HSPA+. None of these are deal breakers by themselves, but put them all together and it adds up. It’s a lot of compromises. Even at the $370 price point, which won’t be available for everyone, it makes a good phone, not a great one. 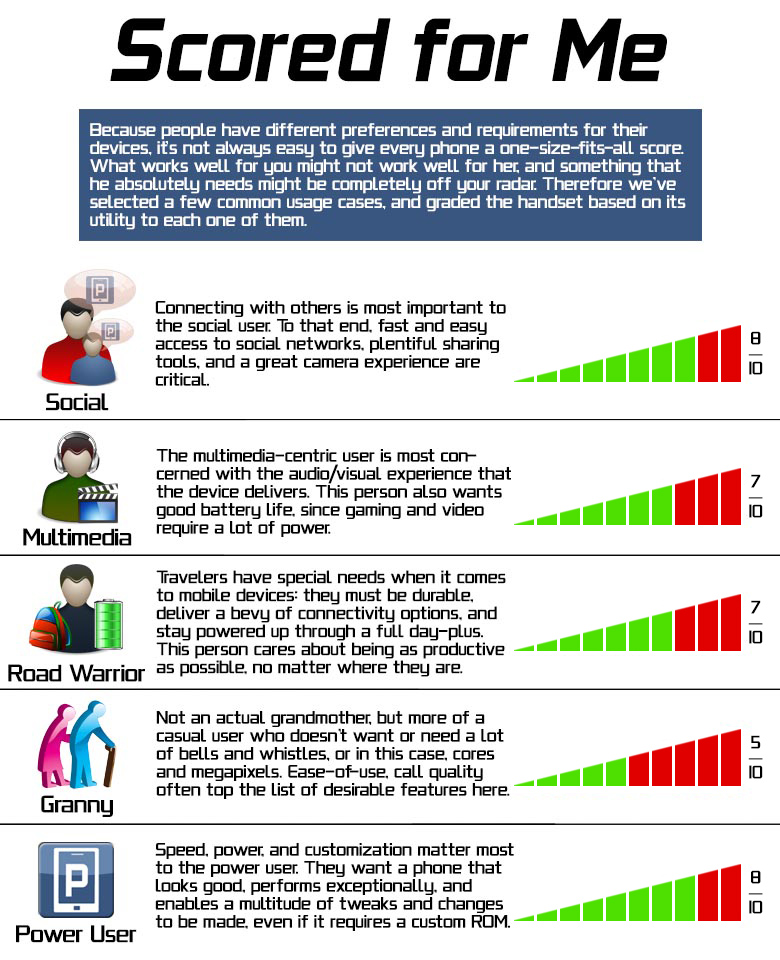 Once again, we’d like to thank our friends at Efox-shop.com for sending us the Xiaomi Mi Note. If you’re interested in getting your own, why not get it from one of Europe’s largest dealers in electronics? Plus, use coupon code “pocketnow” for $10 off until June 30!

We’d also like to thank US Mobile for supplying us with air time for the Xiaomi Note during the review period. Head to gousmobile.com and build the right plan for you.

It is expected to be a re-branded variant of the global Redmi Note 9 Pro.