The 5.5-inch Xiaomi Mi MIX Nano could be another ‘conceptual’ bezelless smartphone the majority of interested buyers will never be able to own.

Technically, the Xiaomi Mi MIX isn’t altogether bezelless, borderless, edgeless or whatever gimmicky terminology you prefer to adopt when talking about a phone with no perceivable “dead space” around the screen.

But while this commercially-limited proof of concept still features an average-looking “chin”, needed to hold a repositioned front-facing camera, it undoubtedly moves us one step closer to a boundless future reportedly envisioned by Samsung and Apple too.

You know what would be even dreamier than a 6.4-inch, 158.8mm-tall Mi MIX, though? A diminutive variant of sorts retaining the 90+ percent screen-to-body ratio you could more easily maneuver… if you ever got your hands on it.

Enter the Xiaomi Mi MIX Nano, which is the alleged codename of a 5.5-incher with Snapdragon 821 processing power, 4GB RAM, and 64GB internal storage. Those specs are revealed by a very explicit, plausible “about phone” screenshot, with a number of live pics also leaked in China (where else?), seemingly showing two near-borderless devices side by side. 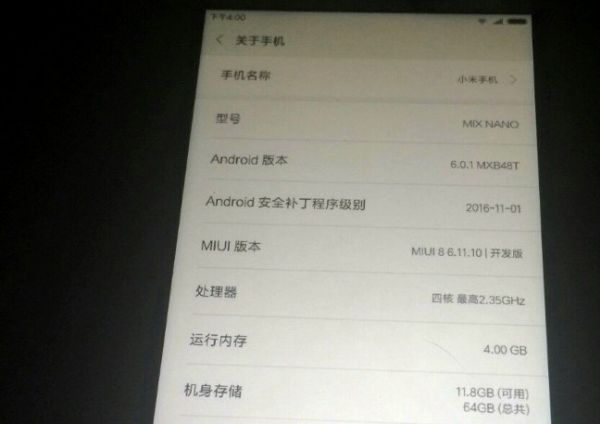 One is clearly the larger Mi MIX, and the other definitely qualifies for a 5.5-inch display squeezed into the standard footprint of a 5-inch or so handheld at a first glance. Rumor is the Mi MIX Nano (just a codename, keep in mind) will see daylight by the end of the year at a rough $450-equivalent price, but alas, we have no reason to expect a supply and demand equilibrium.