That rumored Xiaomi Mi MIX Nano is probably not real, but this Xiaomi Mi MIX EVO could well see daylight before long, Snapdragon 835 and all.
Published 17 January 2017, 05:32 EST

Still waiting on that “Nano-sized” version of the edgeless Xiaomi Mi MIX a company official denied in a bizarrely deleted Chinese social media post a little while back? This just-benchmarked Xiaomi “MIX EVO” could well be it, and to further mess with your heads, it appears to pack Qualcomm’s powerful new Snapdragon 835 processor.

To be clear, the Mi MIX is listed simply as the Xiaomi MIX in the public Geekbench database, so the Xiaomi MIX EVO, if real and prepped for an actual commercial release, should probably be called Mi MIX EVO.

Unfortunately, we know nothing about this new prototype’s screen size or resolution, and at least at the moment, it runs the same aging 6.0.1 Marshmallow iteration of Android. There’s also “just” 4GB RAM under the hood, although a separate 6 gig SKU is always a possibility. 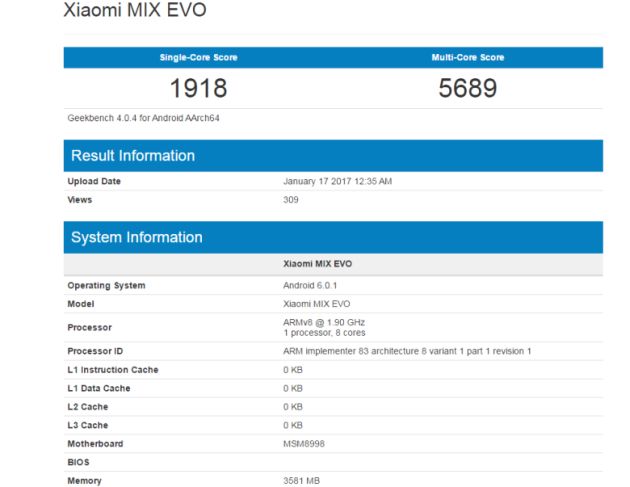 Even so, the MSM8998, aka Snapdragon 835-powered Xiaomi Mi MIX EVO, comfortably beats the MSM8996, aka SD821-packing, and 6GB RAM-sporting Mi MIX in browser speed. The multi-core scores almost couldn’t be further apart, at around 5,700 vs. 3,900 or so, while the single-core performance gap is oddly much smaller (just a little over 100 points).

It remains to be seen if this mysterious new bezelless concept will ever come out, where, for how much, and especially in how many units.