Xiaomi Mi MIX ‘concept phone’ with edgeless design is real, coming soon at $515 and up

The “edgeless” Xiaomi Mi MIX is still not 100 percent screen, with a small chin housing a camera, but it’s a futuristic phone like no other.

Disappointed to see the Mi Note 2 snub so many of the revolutionary features it was assuredly speculated to integrate? It turns out insiders were indeed onto something with their bezel-free chatter, although they didn’t realize Xiaomi actually had two mobile devices in the pipeline.

One mainstream, and a “concept phone with an edgeless design.” But unlike most concepts and early prototypes showcased at events such as today’s glamorous Beijing press gathering, the Xiaomi Mi MIX is a very real commercial product, priced at the equivalent of $515 in a 4GB RAM/128GB ROM standard configuration, and RMB 3,999 ($590) with 6 gigs of memory, 256GB storage, and 18-karat gold rims (!!!) around the camera and fingerprint sensor.

Xiaomi is definitely not kidding around or overstating the Mi MIX’s appeal when claiming this is “the phone of the future”, “beyond anything that’s available in the market today.” With a 6.4-inch display squeezed into the approximate footprint of the iPhone 7 Plus, the screen-to-body ratio hits a record high 91.3 percent, as a slim “chin” is retained to accommodate a 50 percent smaller than traditional selfie camera. 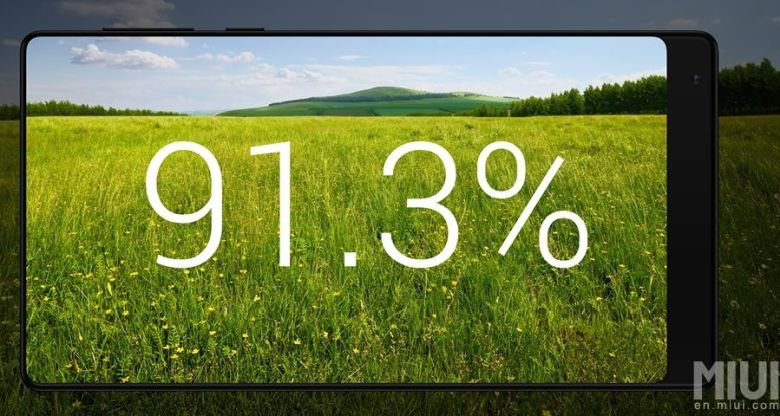 Other than that, the front is all screen, ultrasonic proximity sensor embedded directly into it, and something called “cantilever piezoelectric ceramic acoustic technology” replacing the conventional earpiece speaker.

The Xiaomi Mi MIX is made entirely of premium ceramics, back cover, frame and side buttons included, with “seamless connectors” fusing its body sans any external adhesives. In short, this is a crazy progressive device that Samsung and Apple are still many months away from contending, although you have to figure Xiaomi will not be able to produce and actually sell millions of copies very soon.