The Mi MIX 2 form factor is quite sleek, but there’s so much more to this phone than just a big screen and little bezels.
Published 27 March 2018, 03:54 EDT

It’s a small step up for one of the pioneering phone series in the bezel reduction games as Xiaomi introduces the Mi MIX 2S.

The follow-on to the Mi MIX 2 retains a sleek ceramic and aluminium build, rear fingerprint sensor, the 3,400mAh battery and the 2:1 full HD display. Some of the typical year-to-year upgrades include the Snapdragon 845 chipset and Android Oreo. It’s nothing stunning when considering the marketplace of limited-bezel phones has been growing for the past year or so.

That doesn’t mean that it’s not okay for a device to play catch-up, though. For one thing, Xiaomi has finally adopted Qi wireless charging on this device and it will sell a compatible charging pad for ¥99 ($16). For another, there’s a dual-camera system — the Sony wide-angle camera has 12 percent larger pixels than last year’s while the Samsung unit gives depth with 2x optical zoom. The experience is driven by AI with subject identification and Google ARCore support and is characterized overall as an upgrade from the Mi 6. 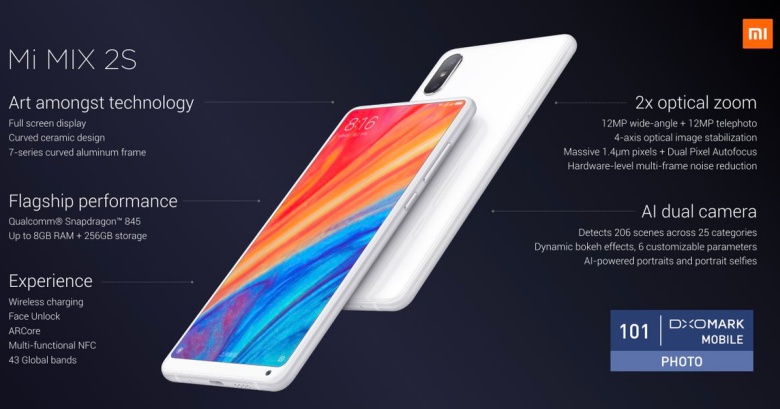 Other minutia includes USB 2.0 Type-C connection and dual SIM slots with support for 43 international bands on the top-end model and 4×4 MIMO — don’t count on this leaving China too quickly, though, especially if you’re in the United States.