This could be our first look at a few of Xiaomi Mi MIX 2’s specs, Snapdragon 835 included

The calm before the storm of next-generation flagship smartphones from both Apple and most Android heavyweights is upon us, as we’re left speculating and dreaming about the likes of the iPhone 8, Samsung Galaxy Note 8 or LG V30 for at least another month and a half or so.

But a potentially super-exciting and eye-catching fall 2017 high-end handset release you’ve probably not given a lot of thought to lately is today back in the spotlight.

Disguised under the name Xiaomi MIX, a mysterious Snapdragon 835-powered prototype has paid Geekbench a quick visit earlier this week, also running Android 7.1.1 Nougat. Now, the original Mi MIX is still on software version 6.0, but that’s not what makes us think we’re dealing with a sequel of sorts here.

Instead, last fall’s concept “edgeless” device came packing a quad-core Snapdragon 821 processor, which the second-gen model should likely upgrade to an octa SD835 based on 10nm architecture, Adreno 540 GPU and all. 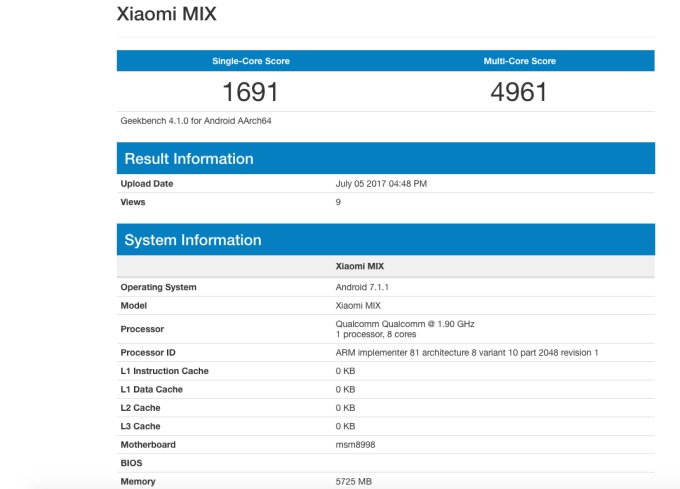 Pre-launch benchmarking information includes 6GB RAM too, which isn’t standard on the existing Mi MIX, though at least in theory, you can opt for such a state-of-the-art configuration, with 256GB storage also in tow, as well as 18K gold rims around the rear camera and fingerprint sensor.

All in all, we could be looking at a Xiaomi Mi MIX 2, a Mi MIX EVO or something along those lines, with a screen-to-body ratio exceeding 90 percent and, hopefully, more than a few thousand units available domestically and internationally.