This sounds more than a little implausible, but a “mid-range” Xiaomi Mi 6c may have just been benchmarked with Snapdragon 660 and 6GB RAM inside.
Published 29 May 2017, 07:45 EDT

What’s next for Xiaomi after the (limited) domestic release of the high-end Mi 6 and last week’s exciting announcement of an upper mid-range, affordable Mi Max 2 phablet with a gigantic battery in tow?

Not a long overdue US expansion, that’s for sure, and the company’s second “borderless” phone may also need a bit of extra prep time. Meanwhile, for some reason, the Xiaomi Mi 6c introduction might be rushed, as only a few months have passed since the Mi 5c saw daylight almost a full year on the heels of the “regular” Mi 5.

At least we’re guessing that’s what Xiaomi is testing at GFXBench under the very cryptic “Jason” codename, with a familiar-sounding 5.1-inch Full HD screen on deck, alongside Android 7.1.1 Nougat, 64GB internal storage and 6GB RAM. Wait, what?

If this is indeed a pre-launch Xiaomi Mi 6c prototype, shouldn’t something like that downgrade a couple of the original Mi 6’s specifications? 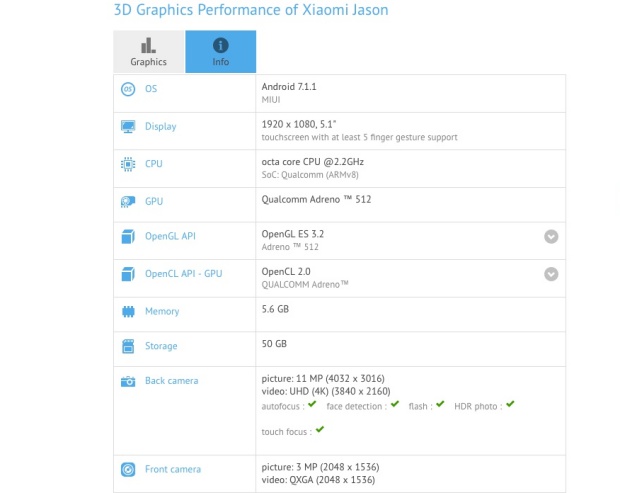 Granted, a Snapdragon 660 processor appears to take the flagship 835’s place at the heart of the presumed Mi 6c, but that’s also far from a pushover, based on the theoretical information Qualcomm disclosed just a few weeks back.

It’s worth pointing out that this could be the world’s very first SD660 device, though we believed the same about the Mi Max 2 at one point, and the standard Mi 6’s 8MP front-facing camera makes way for a 4MP selfie shooter. Still a surprisingly nice list of features for a “mid-ranger”, don’t you think?