Xiaomi wants the world to know it has something in store for a November 24 announcement, but it could be one or several of recently rumored devices.
Published 18 November 2015, 09:06 EST

If you thought the final stages of the calendar year couldn’t possibly bring any new, half-exciting Android hardware to light, and you had to wait until CES or MWC in early 2016 to check out the mobile industry’s “next big things”, you must not know how the Chinese market works.

On the Western hemisphere, it’s all about Thanksgiving, Black Friday, Cyber Monday, and Christmas. But the Chinese New Year is celebrated in February, giving Xiaomi plenty of time to showcase some sizzling hot phones and/or tablets, then actually put them up for grabs when the shopping spree begins.

Still, rumors of a Mi 5 announcement on December 3 were probably inaccurate, as the up-and-coming device manufacturer just posted a teaser image for a no doubt glitzy November 24 press affair in Beijing.

It’s possible only the mid-range, premium built Redmi Note 2 Pro sees daylight then, followed by the true flagship we’ve been waiting for since mid-2014 early next month. But that sounds like a stretch. Most likely, this event from the coming Tuesday will break the covers of at least three distinct Android soldiers. 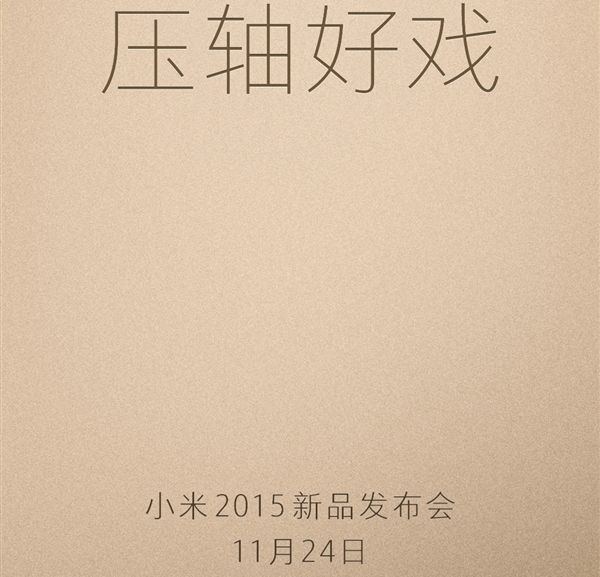 You have your road-opening Snapdragon 820-powered Xiaomi Mi 5, the familiar yet unique Redmi Note 2 Pro, and finally, the refreshed but hardly upgraded Mi Pad 2. There’s also a chance Xiaomi will be using the Beijing stage to make its laptop debut fully official, though the risk of overcrowding the multi-product unveil ceremony is one the OEM can’t afford right now.

Remember, Xiaomi’s domestic smartphone growth has slowed down of late, and globally, analysts expect the bold 80 million sales units target for 2015 to be missed by around 10 mil copies.