Last year’s gaming-centric Razer Phone certainly looked impressive, both on paper and in real life, at least at first glance, ultimately failing to set the mobile tech world on fire, largely due to a subpar camera experience and excessive price point. But the handset’s moderate (at best) success isn’t stopping Xiaomi from financially backing a China-first gaming phone manufactured by a new company called Black Shark.

The Black Shark phone is a very eye-catching Snapdragon 845 powerhouse, and unlike its main rival, it may well appeal to the mobile gaming-obsessed masses at a starting price of only $480 or so. That’s right, the “entry-level” 6GB RAM/64GB ROM configuration is up for pre-order in the world’s largest smartphone market on JD.com and Xiaomi’s own official online store at CNY 2,999, with a couple of extra gigs of memory and a full 128GB internal storage space fetching 3,499 Yuan, or around $555. 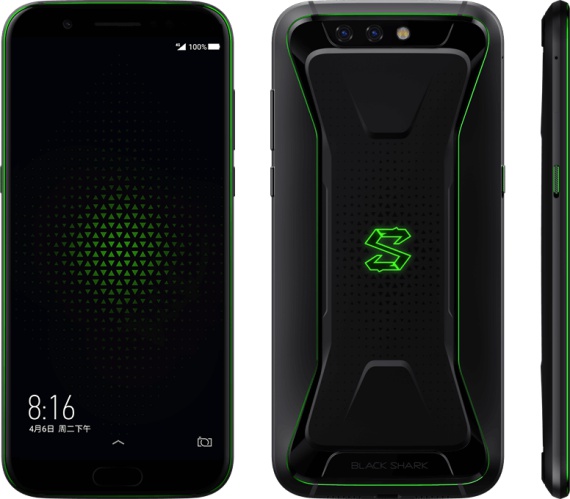 You’ll need every gig of local digital hoarding room you can afford too, as the 6-inch Black Shark lacks a microSD card slot. And a headphone jack, while we’re on the subject of notable absences.

The large, wide 18:9 LCD screen is hardly impressive compared to the Razer Phone’s Quad HD screamer, with resolution capped off at 2160 x 1080 pixels, aka FHD+, and no word of a 120 Hz refresh rate. On the bright side, the new guy is a little lighter, at 190 grams, despite adding 0.3 inches of screen real estate, with an integrated liquid cooling system at the very top of its list of selling points.

Other standout features include dual 12 and 20MP rear-facing cameras with f/1.75 aperture, a 20MP f/2.2 selfie shooter, generous 4000mAh battery, a flashy design meant to support extended gaming sessions, a dedicated side button for quickly entering a high-performance mode, Android 8.1 Oreo (with some sort of a skin on top), and an optional controller you can easily attach to the phone after paying a separate 179 Yuan ($29). Something tells us global availability is out of the question, but you never really know.