The cryptic Xiaomi Berlin smartphone seems like nothing to write home about… apart from packing a mid-range Snapdragon processor that Qualcomm is yet to unveil.
Published 09 March 2018, 05:09 ESTUpdated 02 April 2021, 14:51 EDT

Qualcomm caught MWC 2018 attendees completely off guard with the (vague) announcement of an entirely new family of smartphone processors aimed at affordable “high-tier” products. Of course, the semiconductor giant is also hard at work on its next true flagship SoC, likely planned for an early 2019 launch with 5G-ready Snapdragon X50 modem integration.

In addition to all that, one very popular mid-range Snapdragon “mobile platform” might be getting a sequel soon, as suggested by a cryptic Xiaomi Berlin benchmark. We’ll be honest, we have no idea what official name this “Berlin” handset may end up carrying.

What we do know, thanks to preliminary information revealed at the Geekbench Browser website, is the mid-end phone will be packing a Snapdragon 632 processor. That sounds like an ideal candidate for a spot between the SDM625-powered Redmi Note 5 (or Redmi 5 Plus) and the Redmi Note 5 Pro that pairs a Snapdragon 636 chip with 4 or 6GB RAM. 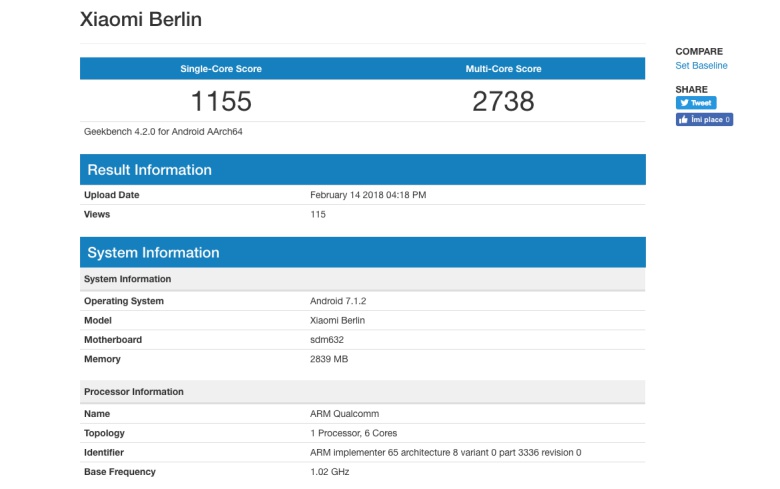 Speaking of memory, the unreleased SMD632 motherboard is coupled with 3 gigs of the good stuff on the Xiaomi Berlin, at least in the configuration tested by Geekbench. That might be an old pre-launch prototype, still running Android 7.1.2 Nougat on the software side of things, while the Snapdragon 632 is dubiously listed with a hexa-core CPU arrangement, despite reasonable octa-core expectations. After all, even the SDM630 comes with eight CPU cores, clocked at up to 2.2 GHz.

Check out the latest smartphone deals, where you will find the latest Samsung Galaxy Z Fold 3, OnePlus 9 Pro, and more on sale