Xiaomi’s list of Nougat-eligible phones is pretty lengthy, including surprises and omissions

Xiaomi has already released a few new phones running Android Nougat, also updating a couple of old ones, and planning many other UI makeovers.

Xiaomi is known, beloved and respected for many things, starting with the unrivaled quality – pricing ratio of its low to mid-end phones in China and India, but when it comes to software support… let’s just say there’s still room for improvement.

Too focused on its proprietary Android skin, which is constantly revised to look less and less like Google’s stock operating system, the company behind such groundbreaking devices as the Mi MIX will often forget to update the underlying platform even for contemporary high-enders.

On the bright side, at least the Mi 6, Mi Max 2 and Mi 5c have all launched running 7.1.1 Nougat out the box these past few months. Believe it or not, the modest Redmi 4X is apparently next in line for a bump to the latest Android version, and a bunch of other handsets are due for 7.0 promotions… at some point. 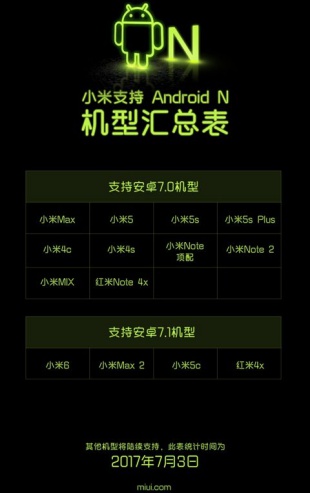 Those include all the usual suspects, like the aforementioned Mi MIX or the Mi 5s, Mi 5s Plus and Mi Note 2 that also came out last fall. But Xiaomi has a few nice surprises in store for owners of the Mi 4c, Mi 4s and Mi Note as well. The Snapdragon 808-powered Mi 4s is already around 18 months old, mind you, the even humbler Mi 4c saw daylight back in September 2015, and the original Mi Note featured Android 4.4 KitKat and a Snapdragon 801 processor early that same year.

Then again, the list of Nougat-eligible Xiaomi smartphones has some notable or outright weird omissions too, like this year’s Redmi Note 4 or 2016’s Redmi Note 3 and Redmi Pro. Let’s hope there’s still room for additions down the line.