Take a look at a Windows user’s experience in trying to switch from an old Windows Phone to an iPhone.

If you’ve been following Pocketnow for almost 20 years, you may remember when we did numerous series of articles where one of us as an expert in one platform, would switch to a different platform that we had never used and chronicle our experiences. I haven’t used an iPhone as a daily driver ever, and haven’t really used iOS much since iOS 4, but I have had to help friends and colleagues set up our custom private security certificates for Exchange server sync and such. So I’m not completely unfamiliar with it. Anyway, this is part 1 in an attempt to give up my trusty Nokia Lumia 1020 Windows Phone 8.1 device to see how the iOS world lives. As a word of warning, this is written from the perspective of someone new to iOS and often it’s important to take a step back and look at things with fresh eyes to see if it really is well-designed or if that’s something we just believe because it’s what we’re told. iOS 11 is supposed to come out today, but I thought it’d be best to do the set up right away while this iPhone is still on iOS 10.

Setting up the iPhone 6s took a lot longer than expected. First of all, I couldn’t get past the language selection screen without a SIM card and then I couldn’t get past the activation screen without an AT&T SIM card as I wanted to use it with T-mobile. Unlocking the phone via ATT was denied after a couple days, so that didn’t work. Luckily I had an old inactive ATT nano SIM that at least let me continue with the rest of the setup… and there were a lot of other setup screens to go through! I skipped the iCloud restore options, since I hadn’t used my iCloud account since iOS 4 and I figured a new account would be better anyway. 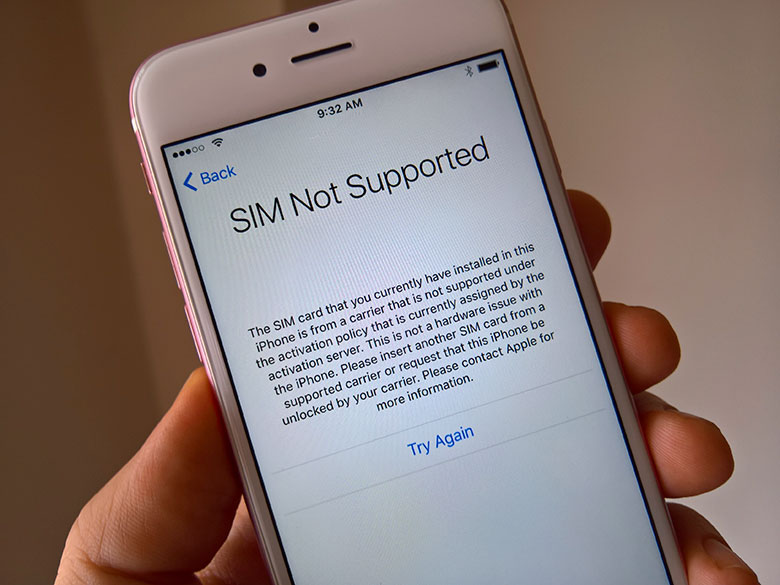 When I finally got to the home screen, I thought to myself… “Well, this is the same that it’s been since 2007.”  It’s still just a grid of icons. Same as the Palm Pilots of the late 90’s. Same as Windows 3.1 in the early 90’s. Different background picture though. The way the background image on the lock screen subtly moves as you tilt the phone is a really nice touch that I loved when it was in the Zune HD.

The iPhone 6s itself feels pretty nice, except that the thin smooth edges seem like they’ll be very slippery and the rounded protruding glass screen seems very delicate, like it could break very easily. Maybe that’s why I see so many people with cracked iPhone screens.

Naturally the first thing I’m going to do is set up at least some of my email accounts. Adding my primary Microsoft Exchange account was very easy and the iPhone actually supports syncing mail, calendar, contacts, tasks (called reminders), and notes. That’s WAY more Exchange account support than Windows Phone 8 (which doesn’t sync notes) and Windows 10 Mobile (which doesn’t sync notes or tasks unless you install the To-Do app.)

Switching between mail accounts is awful on iOS 10 since you have to use the back button in the upper left (out of reach for one-handed use) until you get to the list of accounts. There’s no way to pin specific folders to the home screen which is much better for organizing priority accounts and ignoring low-priority accounts. Luckily, I was able to find the Mail notification settings where I could turn off sound effects for low-priority accounts, and customize sound effects for high-priority accounts. Thank goodness for that!  I can also turn off icon badge notification numbers for specific accounts, but again, I can’t separate those unread numbers by accounts or folders like I can on Windows Phone, which is much more useful.

Apple Mail is also terribly slow at receiving email!  It does support push receiving for Microsoft Exchange accounts (includes Office 365, Outlook.com) via Exchange ActiveSync as well as Apple iCloud accounts, but it does not support push receiving for IMAP accounts. Personally I would call that a major deal breaker as the IMAP IDLE push email solution has been around for decades. You can only set IMAP accounts to sync periodically, and the lowest time option is 15 minutes. That’s crazy! No wonder people with iPhones are terrible at using email.  On Windows Phone, all of my emails arrive instantly and reliably on all accounts.

On the other hand, unlike Windows Phone, Apple’s Mail app does correctly flag IMAP server emails with their reply/forward status.

The next thing I need to do is install my apps. Unfortunately, that didn’t work right away. iOS gave me an error when trying to download one app, and on the second attempt told me that this Apple ID hasn’t been used in iTunes yet, so then I had to go through MORE SETUP SCREENS requiring more information and user agreements.

That’s when I gave up.  Stay tuned for part 2 where maybe I’ll have more patience and hopefully we’ll successfully update to iOS 11.