Check out the new data that has us wondering what’s driving interested customers away from Windows Phone.
Published 25 April 2013, 20:03 EDT

Windows Phone has yet to become a very popular platform. While it has its passionate supporters, and is host to some pretty nice hardware, it just doesn’t have the numbers to back it up. If we look at the the most recent figures, Microsoft only has about 4% of the US market. What makes that so interesting is that polling data suggests that far more users have the platform in mind when making their smartphone purchasing decisions, but ultimately choose something else.

Indeed, something like 23% of shoppers surveyed report giving consideration to Windows Phone for their next phone purchase. That number’s up a bit recently, but it’s hovered in the 15-20% range for the past year.

The figures for the other major platforms show a much closer correlation between the share of users considering them for their next phone, and their actual market shares; Apple has a little over 40% of the US market, for instance, just a few points off from the consideration figure. By far, the Windows Phone numbers are least reflective of its actual sales performance.

So, why is that? We don’t really have an easy answer. Maybe retail employees aren’t doing the best they could to demonstrate Windows Phone’s features. Maybe shoppers are simply disappointed when they finally get the chance to try out the platform in person for the first time. For whatever reason, Microsoft is having a really hard time converting interest into sales. 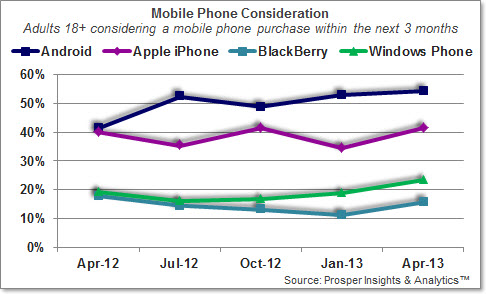