The Lumia 1520, Nokia’s first ever Windows Phone phablet, will best most Android superphones in at least one respect: its home screen.

Adam Doud sure doesn’t like the idea of a Windows Phone phablet.

Pocketnow’s newest editor is, if nothing else, consistent. He’s denounced the concept of a Nokia-made smartphone/tablet hybrid more than once, with his latest anti-phablet proclamation coming on the heels of today’s unveiling of the new Lumia 1520.

Adam’s arguments are quite valid. His insistence that modern Windows Phone software can’t effectively utilize the added screen real estate of a phablet is understandable, even if the problem isn’t confined to Microsoft’s OS (we recently took the Android-based HTC One max to task for the same shortcoming). And his desire for greater one-handed usability is definitely something I can get behind. We can’t all have hands like Taylor Martin or Marques Brownlee, after all.

But I disagree with Adam. That doesn’t mean I’m going to call him a “fanboy,” “bias(ed),” or any of the five or six other tired old pejoratives lying around in the Troll’s Toolbox. Instead, I want to quickly call attention to a point that I think deserves to be made about Windows Phone phablets: to me, they make more sense than their Android counterparts.

So here’s the thing: I really like some Android phablets. Sure, there are a few phones out there that straddle the line -you could make a case that superphones like the LG G2 and Samsung Galaxy S 4 are more phablet than not, and devices like the Galaxy Mega and Sony Xperia Z Ultra are in a different class entirely- but for my money, it doesn’t get much better than a solid, robust, feature-packed smartphone/tablet hybrid. I’m talking about the Galaxy Note 3, of course, a device I’ll make no apologies for holding above most others. Between its S Pen and its special software suite designed to leverage the massive display, it comes the closest to what I think a true “phablet” should be.

And yet, like all (stock) Android devices, it falls short in one crucial area: the home screen. Yes, you can populate your umpteen scrollable panels with widgets, icons, and folders galore – a great strength of Android is its customizability. But regardless of the resolution of your phone’s display, it’s very hard to get the device to effectively utilize all of its desktop space without resorting to a third-party launcher or a service like Themer.

Until Google fixes this problem in a future Android release with out-of-box support for universally resizable widgets and many more options for font sizes and the like, I’ll always look at supersized Android phones with a little pang of irritation. The kind of slight annoyance you get when you come across a wasted opportunity. “If only I could toss some Live Tiles up in here,” I’ll say for the hundredth time. 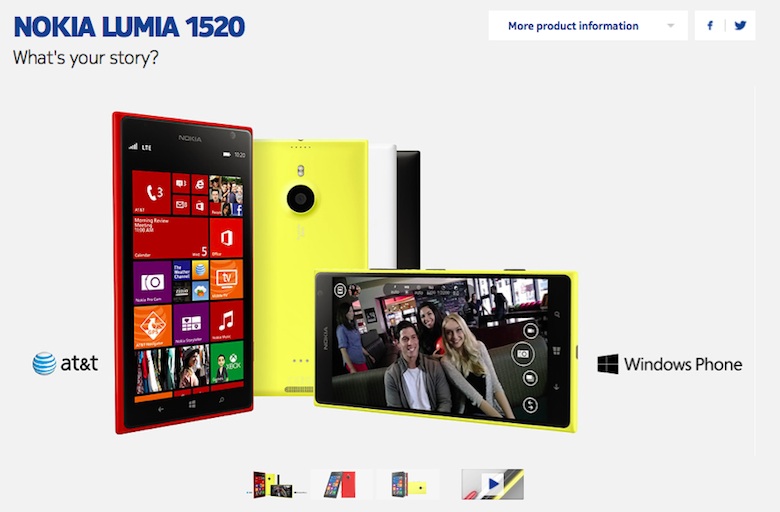 From its inception, Microsoft has pitched Windows Phone as the platform to buy into if you want glanceable information. From the original release through to 7.5, 7.8, and all the way up to the current build of Windows Phone 8, the central concept of the Modern UI’s home screen experience has been that you shouldn’t need to dig for information. Any information. It should all be there, displayed in the form of Live Tiles, the minute you turn on the screen.

It’s a promise Microsoft has struggled to keep in some areas -the platform’s Me and People hubs are badly in need of updates, and the lack of a notification center is still a sticking point for many folks out there- but in others, it really works well. On my Lumia 1020, the weather widget flipping back and forth between current temperature and forecast saves me a tap a few times a day. So does the constantly-updating comment count on Instagram client 6tag. Getting text message previews on the large SMS tile is a handy replacement for Android’s notification tray when I do miss it, and the constantly-shuffling Gallery tile adds some needed warmth, reminding me of where I’ve been and what I’ve photographed. It’s a home screen experience so good, at times you’re left wondering just why you need a notification center anyway.

Improbably, that positive experience translates to the notebook and tablet experience as well. As much as we griped about the Surface RT and other RT-based tablets, we always loved the customizable Live Tiles on the large home screen – tiles which made using the platform much more enjoyable thanks to their intelligent and stylish use of the screen space. That’s more true than ever thanks to the option for more tile sizes in Windows 8.1, allowing users to cram even more information onto the screen.

That’s why the Lumia 1520 is so important, in my view. It’s more than just Nokia’s first 1080p-equipped device; it’s concrete proof that the dense tile layout of Windows 8.1 can work on Windows Phone, given high enough resolution. The 1520’s inclusion of an available third row of home screen tiles expands the usable interface area in a major way, making more of the screen active – making the 1520 a much better phablet than most big-screened Android phones I’ve encountered. At least in terms of glanceability.

Of course, not everyone will favor a “pocket edition” of the Windows 8 user experience – and as I said above, there’s much more to a well-rounded phablet than just a big screen and a glance-friendly home screen. Whether the 1520 is a phone I’d carry or recommend is a question which will ultimately have to wait for Pocketnow’s full review. But I really think Windows Phone’s interface lends itself to big screens in a way that’s more effective, and frankly more attractive, than Android’s approach. And I’m looking forward to trying it out in the real world, hopefully alongside a proper Nokia tablet.