A Windows Phone Action Center appears to have been leaked complete with screenshots, details, and confirmation of codename “Blue” for Windows Phone 8.1.

We’ve heard a lot of rumors regarding a notification center inside Windows Phone lately. If the rumor that talks about the feature is true, then we also have a confirmation of Windows Phone 8.1’s codename. An email has been allegedly sent out by Microsoft to the Windows Phone team that features the above image, where the “Windows Phone Blue” moniker seems to be used in an official manner while referring to Windows Phone 8.1.

Also, part of the same alleged email, is a so-called Windows Phone Action Center, which would actually be the notification center the OS never had. The image below seems to hint that one would be able to toggle WiFi, Bluetooth, Airplane mode, as well as Driving mode, using the shortcuts at the top.

Just below are apparently notifications for missed events, with the ability to clear them all; there’s also a Settings icon which would probably open up a new screen where one could customize notifications. We’re also seeing that, once the Action Center has been deployed, the carrier name, battery percentage, and date, are displayed as a second line, at the top (which might not even be part of the Action Center itself, but something Microsoft is planning as a permanent second info line).

Additionally, the slide reveals an “intelligent” way for apps to manage notifications: it appears that programs can “silently add, update, or delete notifications”.

As per how one would be able to access said Action Center, it looks like Windows Phone might adopt the Android and iOS: sliding down from the top.

Beginning of April, at Microsoft Build, is where Windows Phone 8.1 is expected to be officially announced, even though we’ve heard rumors that some OEMs, like Nokia for instance, are preparing some Windows Phone 8.1 handsets for MWC. 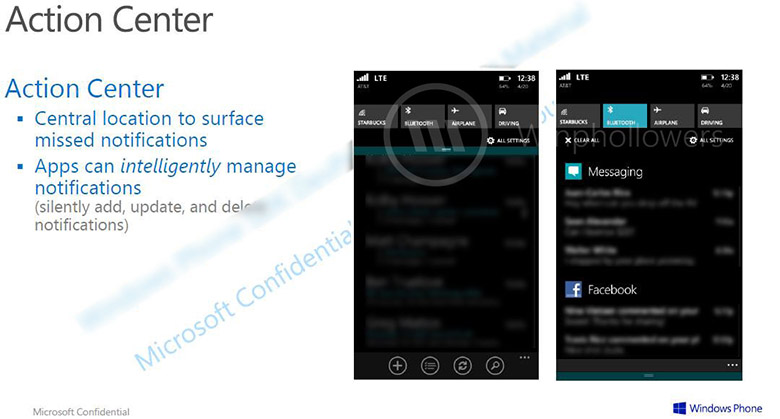 Source: Winphollowers
Thanks everyone for the tip!