In this image we’re seeing some upcoming OS features being accidentally leaked, specifically Windows 10 Phone portrait tiles. Would you fancy them?

We’re still waiting for the Windows 10 Phone preview to land — and there are some fresh details which you shouldn’t have missed if you’re interested in the preview — but until then we take whatever we can get. Vesku Paananen, a Microsoft employee, might have accidentally leaked a feature we haven’t seen so far, one that will probably grace our Windows Phones: we’re talking about Windows 10 phone portrait tiles.

According to BestMobileBlog, who spotted the image, in preparation for a Business Summit where he’d show off Windows 10 for different devices, Paananen has tweeted the picture you see above (and cropped below). The image has since been taken down, but we can clearly see that the Nokia/Microsoft Windows Phone on the table shows a strange looking People tile. While currently, tiles can be extra large (double the regular tile, four times the small tile), with Windows 10 we’ll likely be able to also drag a tile down, vertically, and use it in portrait orientation. Whether this is something we’ll be able to do on all tiles, or just specific ones, is not certain at the moment.

We’re waiting for official word from Microsoft on all the aesthetic changes — and we hope they will be better received than these ones — but, until then, tell us what you think of the idea of having portrait tiles. 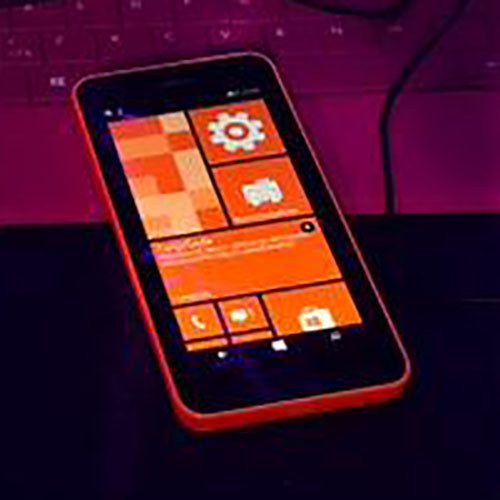