For the third year running, I’m carrying a Windows Phone for the holidays – and this year it’s not the camera I have to thank, but the community.

For the past two years, my home-for-the-holidays handheld has been a Windows Phone. My trusty Lumia 1020 saw me through a wild New Years’ Eve party and a more sedate Christmas the following year, and on both occasions I cited the camera as the reason for my choice. Indeed, the 1020’s 41MP monster was a better and more versatile choice than the iPhone or Android cameras available in 2013 and 2014, and it produced some wonderful photos from my holiday vacations. But now, coming off a double-review of Microsoft’s two newest Windows 10 Mobile smartphones, I suspect that the reason I keep coming back to Microsoft’s offerings has less to do with the camera, and more to do with the community.

Those who’ve been reading my stuff for a while probably just did a spit-take. For years I’ve heavily criticized the more vocal members of the Windows Phone fanbase, even at one point accusing them of helping to kill the platform with their vitriol and intolerance for any criticism of Microsoft’s products whatsoever. While those problems still remain among the (dwindling) audience for Microsoft smartphones, I’ve come to realize that, for adopters of a nascent or underdog platform, such a passionate community can also be a big part of the fun.

I’ve used a Lumia 950 XL for the past week or so, and I spent about two weeks with the Lumia 950 before that. The review video above reflects my most recent encapsulation of the Windows 10 Mobile experience on this new hardware, and it’s not good. The platform is riddled with bugs, bearing all the hallmarks of an OS released before being fully baked, an issue exacerbated by the uninspired hardware design of the handsets it’s running on. In short: the newest Windows 10 Mobile phones are devices I’d recommend only to the most devoted of Microsoft fans – and even then, it’s a bit of a stretch.

Those fans, though, are numerous enough to have exhausted Microsoft’s stock of 950 XL units on several occasions since the phones went on sale. And even if that isn’t saying much, the combination of those buyers with the folks running the Windows Insider preview on older hardware has led to a critical mass of Windows 10 Mobile users. Those users gather together in places like r/windowsphone and the official Windows Feedback community, and the result is often a pretty uplifting place built around something everyone can get behind: problem-solving. 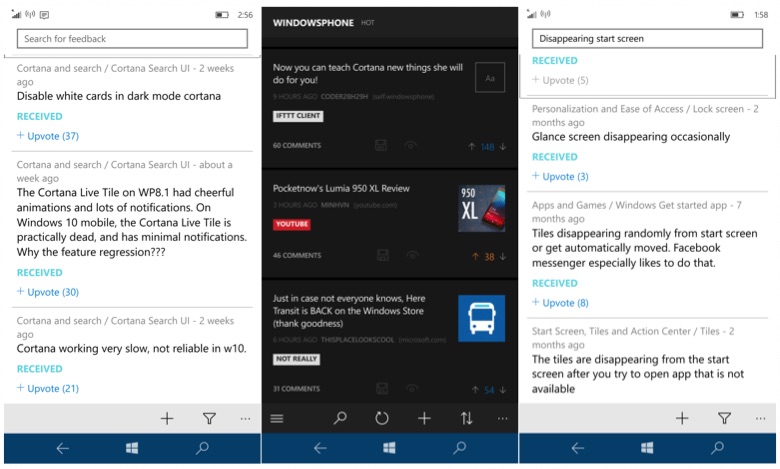 I first discovered the Feedback app when using the wrong screenshot key combination on the Lumia 950. Unlike on an Android phone, pressing power + volume-down on Windows 10 smartphones doesn’t execute a screengrab (that’s what power + volume-up is for) but instead shortcuts directly into the relevant section of the Windows Feedback app. So if you were looking at the Windows Store when you used the shortcut, you’re directed right into the Store section of the Feedback forums where you can report your issue. This also serves as a valuable sanity check if you’re worried you might have a defective device (which is often the rallying cry of platform fans reacting to negative reviews in the comments: “he’s got a bad device! My phone never does any of that!”). Seeing twenty other people reporting your same issue on twenty other devices serves as instant reassurance that you’ve found a legitimate problem with the platform. And once you’ve found the problem, you can report it – either by submitting your own report or, if you’re pressed for time, just upvoting one of the existing reports that describes your issue. The more negative interpretation of such a well-designed system is that consumers are being used as beta testers because Microsoft fired its testing department, which sort of taints the luster. Still, it’s a very cool form of direct feedback.

This is hardly the first example of a big company leveraging a passionate userbase for software testing. Back when webOS was still a thing, HP put some people on forum duty in the webOS Nation community to solicit feedback on early builds of Palm Pre, Pixi and Veer software. I distinctly remember a phone call with an HP developer relations representative who’d seen my feedback in the forums and wanted to know more about the problems I was having with my Veer. Helping HP diagnose specific issues I was having served a twofold purpose: it helped the company hone its products, and it made me feel like an active participant in the platform’s evolution. At the time, webOS was on the decline after an initial wave of praise, with a plummeting market share. The lower it went, the more the community banded together to refine, promote, and, yes, defend the platform. Sound familiar?

So I’m bringing yet another year to a close with a Windows smartphone as 50% of my daily-driver set. This year, it’s not because the camera outclasses everything else –devices like the Galaxy S6 and LG G4 have helped close the camera gap– and it’s certainly not because it’s more convenient. In almost every measurable sense, my Lumia 950 is a worse smartphone than whatever I’m carrying in my other pocket, and one of its most compelling features (Continuum) is totally useless when I’m traveling. But my Android phones, while imperfect, are secure in their success. They don’t need my input, and they’re buoyed by a massive community secure in its domination of the market. That’s cool but it’s not fun. It’s fun to be an underdog; it’s fun to carry something that makes people say “what’s that?” And it’s fun to share those observations with a community that feels the same way. The community won’t save Windows Phone, but it’s kept the dream alive through the lean years … and it’s making the transition to Windows 10 Mobile that much more enjoyable.