It started out way back in the nineties – Internet without wires. No longer did people have to tie up their phone line while their modem dialed away, beeped, booped, squeaked, squawked, and hissed. Those lucky enough to have an always-on Internet connection could put their laptop anywhere they wanted it – finally free from the limitations and inconveniences of a wired Ethernet cable.

Two standards emerged in the beginning: 802.11a in the 5GHz spectrum and 802.11b in the 2.4 GHz spectrum. Both had their pros and cons, but it was 2.4GHz that gained in popularity, partly because of its ability to penetrate walls and travel further distances than its companion standard, but moreso because hardware that operated on 2.4GHz was less expensive than 5GHz equipment.

Since then we’ve talked about some of the advantages to using 5GHz WiFi versus 2.4GHz WiFi, and countered that with the pros and cons of 5GHz WiFi 802.11ac. We’ve even heard of plans to expand WiFi out of the radio spectrum and into the light.

That last one – switching over to the visible light spectrum – might be a little while off. In the meantime, however, some new standards are knocking on our door. Let’s take a look at three new standards and see where they’ll fit in your mobile lifestyle.

802.11ac is an awesome standard. It’s fast, lives in the 5GHz spectrum, and can really help you get away from the over-crowded 2.4GHz spectrum. The higher the frequency, the shorter the wave can travel – which is the downside. The upside is that it can carry more data. That’s where 802.11ad comes into play. 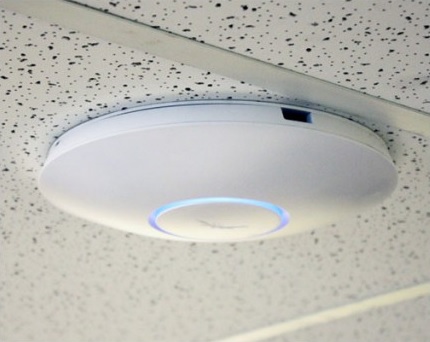 Instead of the “whole house” coverage area that 2.4GHz and 5GHz attempt to realize, 802.11ad operates at 60GHz and is intended for “ultra-high-speed operation within a room”. Transmissions utilizing the 60GHz  spectrum suffer from significant attenuation when propagating through walls and other physical barriers. Put another way, to utilize 802.11ad, your router or access point will need to be in the same room as the device that will be consuming the signal.

At first glance this sounds kind of silly, but even sitting here writing this article, I could benefit from the new usage model 802.11ad will bring. At my new home we went to great lengths to make sure virtually every room was hardwired with Ethernet. However, my office isn’t quite ready, so here I sit in the front-room – which has no Ethernet drops in it. The living room has two drops, only one of which is in use. I could easily install an 802.11ad WAP and get an ultra-high-speed connection to my home network. Instead, I’m stuck with 802.11ac (which isn’t so bad – but when I’m transferring several hundred GB of data from my video editing station to my NAS, every little bit helps).

When products start hitting the shelves with 802.11ah built-in, it will probably be known as White-Fi or Super Wi-Fi. It’s designed to work in the “white space spectrum” of the VHF and UHF bands that we typically associate with television signals. Unlike traditional WiFi, which operates in the 2.4 and 5GHz spaces in the spectrum, White-Fi will operate somewhere between 54 and 790 MHz.

If you’re still watching over-the-air TV, you should be fine, since this spectrum is designed only to transmit on unused TV channels, but just in case, the standard itself has measure built-in to limit interference for “primary users” (analog TV, digital TV, wireless microphones, etc.). 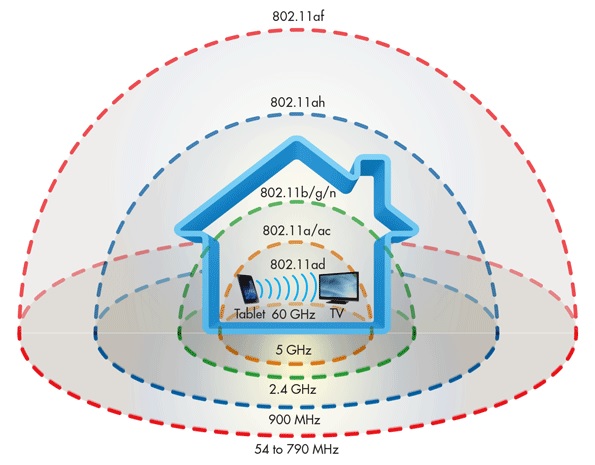 Where might this technology be used? Sensors, data loggers, webcams, and all sorts of devices that are a fair distance away from your primary structure.

Last in our discussion of new WiFi standards is 802.11af HaLow.

HaLow operates in the 900MHz band, so its reach is much further and penetration is better than 2.4GHz and 5GHz networks.

HaLow is less resource-intensive than other standards, which should yield benefits in terms of battery life as well as processing power. One target of HaLow is enabling “Internet of Things” devices, but thanks to it’s extended range, HaLow would be very useful for rural communications and to help offload cell phone tower traffic.

Although it might sound daunting at first, you’re probably not going to have to worry about picking out a new wireless router that supports these new standards for quite some time. Devices will likely be purpose-built around the new protocols, with built-in functionality and interoperabilty coming right out of the box.

Nonetheless, it’s nice to see all the new wireless features that will be in our lives before long, and getting to know what they’re called today will help you know what the protocols might be used for when they’re available in products that you might want to buy.

Before this, the ROG Phone 5 faced a similar treatment and broke into two halves. However, the Legion Phone Duel 2 broke more readily.

The Galaxy Tab A7 Lite is touted to pack a 5,100mAh battery. As per the renders, it will have a flash-less camera on its back.