Why We Need To Stop Complaining About Non-Removable Batteries

I’ve said before that I think the companies that provide the widest array of choice are the ones most likely to be successful (right behind the companies that make all your choices for you, of course). That’s because a lot of people like the freedom and convenience that a wide range of choice provides, whether it be car colors, TV sizes, or brands of dishwashing detergent. It’s good to give people options.

When it comes to mobile phones, one of the most important facets of the user experience is battery life. Since battery technology consistently lags behind other areas of development, this is a factor of increasing concern to almost every user out there. As our devices develop ever-more-efficient means of sucking down milliamp-hours through exciting new features, users’ need for “more power” grows increasingly urgent. 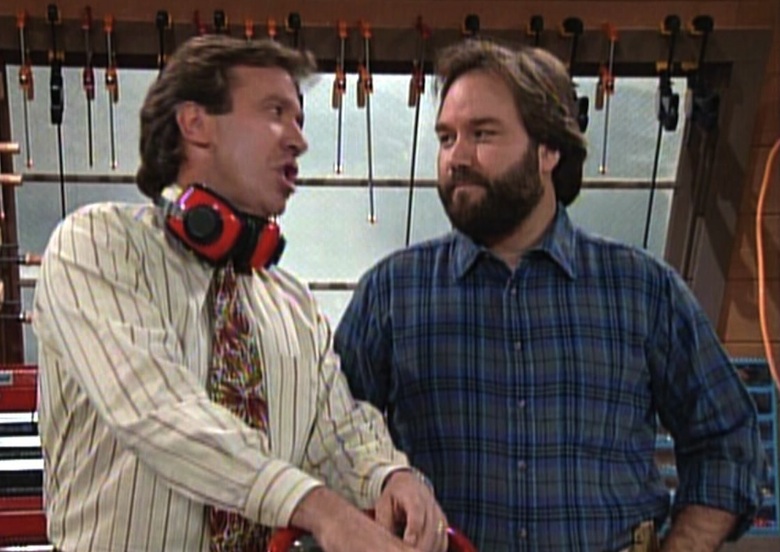 And their grunts become increasingly unintelligible.

Depending on where the majority of a user’s day is spent, this problem of scant endurance is of varying concern. People who spend most of their day in office environments can spring for a spare charger to leave at work, keeping their smartphone plugged in throughout the day. By contrast, someone like a park ranger or construction worker can probably easily go eight to ten hours without seeing a working power outlet.

Something else I’ve mentioned before is that I used to work for a company called Nextel. We sold a lot of ruggedized mobile phones, so I’ve had a lot of experience dealing with the kind of people who don’t work under a roof all day. Nextel’s network was based on an air interface called iDEN, which was an enormous power hog compared to other network technologies of the day. The solution to the resulting endurance shortfall was to sell giant extended batteries to our customers. They’d keep both the stock and extended batteries charged, and swap one out for the other when the first one ran out of juice.

The need to stay powered-up when away from a wall plug was only briefly confined to field workers. As smartphones increased in prevalence, so too did the faster battery drain their more advanced guts demanded. As a result, more and more everyday people were forced either spend more than $50 on a spare battery, or spend half their day with a powerless smartphone. 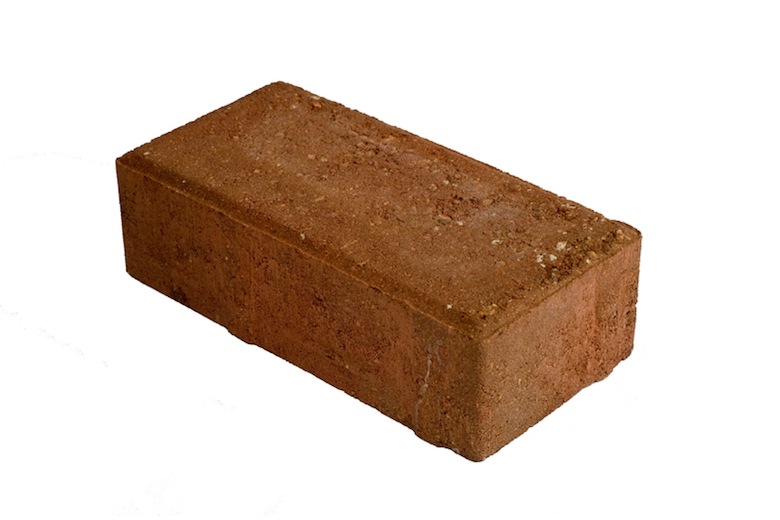 Which is exactly as useful as one of these.

Different OEMs have found different means of dealing with this issue. Of course, Motorola has leaned toward a combination of clever power management and brute force for extending its devices’ endurance. HTC has done some clever optimizations to extend the battery life of its One series. Samsung has long been a strange amalgamation of most-wanted-criminal and knight-in-shining-armor when it comes to this stuff: its phones are seldom long-lasting, but the company often offers free or deeply discounted spare batteries for sale with new devices.

So, with all these spare power packs littering the landscape, you’d think we’d be in okay shape while we wait for fuel cells or sarium-krellide crystals to propel us into the future. Not so fast, though: turns out, spare batteries are going out of style. Blame the iPhone for starting the trend, if you like, but Apple is far from the only OEM moving in this direction. I have three devices from three manufacturers here with me: the HTC One X, Nokia Lumia 900, and Samsung Galaxy Nexus. None of them are Apple phones, but two out of three of them have integrated, non-removable batteries.

This trend has a lot of people a little T.O.’ed. In the first hundred comments of any review of a device with a built-in battery, there’s always someone who cites that deficiency as a deal-breaker. Presumably, these are people who’ve grown used to the convenience that carrying a spare battery offers. Well, I’m going to T them O further by saying this: the decline of swappable batteries isn’t that big a deal. In fact, in some ways it’s a good thing. So everyone should stop complaining. 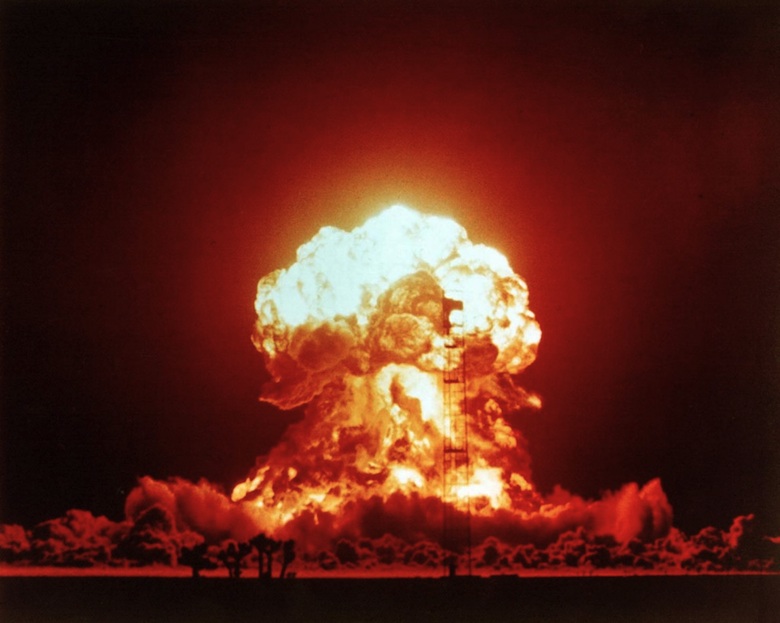 Hear me out: this is my situation. The Galaxy Nexus I mentioned before is my daily driver. It’s an LTE device running Android, so of course the battery life is horrendous. I took Samsung and Verizon up on their generous coupon offer when I bought it, so I got a spare extended battery for something like $20. I installed the extended battery along with its new, thicker battery door, and kept the spare in my coat pocket for the occasions I’d want to swap it in.

Not because I don’t need to; I’m often below 90% within twenty minutes of taking the phone off the charger. Rather, it’s because I carry a portable battery charger with me most of the time. 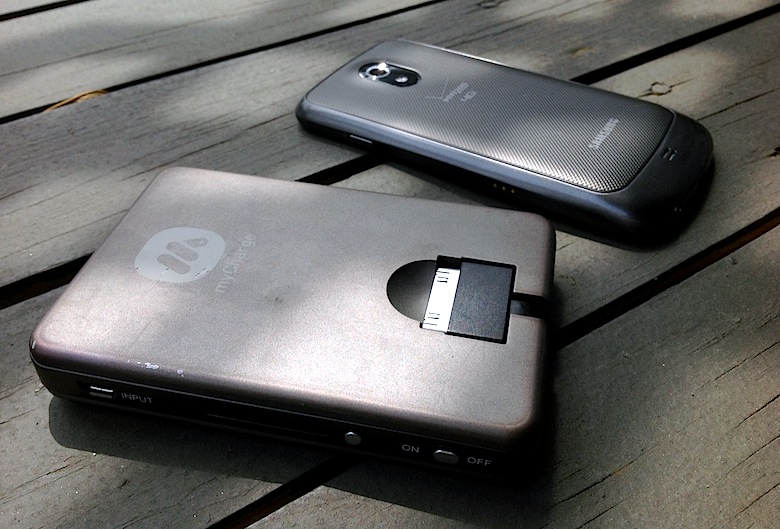 There are many such extended battery packs available; my particular model is the catchily-named “RFAM-0006” from MyCharge. It packs a 3000 mAh reserve, which I can use to charge any device with a mini-USB, micro-USB, or Apple 30-pin port. It’s light enough to carry around without too much hassle – lighter than the Lumia 900 sitting here beside it, and it’s durable. It recharges via another standard micro-USB port.

As far as my usage goes, this totally outstrips any extended battery insofar as convenience and adaptability. Because it’s not built for a specific device, I’m able to use it to charge almost anything I like. In fact, with the exception of my “antique” dumbphone collection and a handful of specialty collectibles, I can replenish any of my mobile devices with it. If I’m feeling generous, I can help out a friend’s thirsty phone too. Also, unlike a battery swap, using the external pack doesn’t require me to reboot the phone when I want to give it more juice. It also doesn’t require a thicker back cover, as most extended batteries do. Finally, because it’s easily recharged, I don’t have to buy a special dock with an extra battery slot, or spend time swapping empty cells into my phone to be charged. 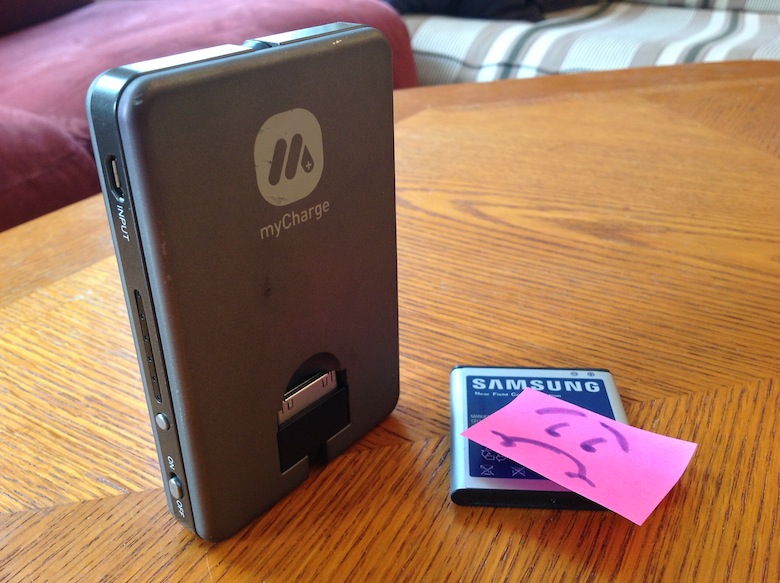 As I said, MyCharge isn’t the only brand out there; there are tons of these battery packs to choose from. Some, like Mophie’s popular Juice Pack line, take the form of a case that surrounds the phone, eliminating the cumbersome cable (but also reducing adaptability). Others, like Naztech’s short-lived accessory for the original Palm Pre, build the battery into a charging holster. There are countless variations.

Is it a perfect solution? No. Spare batteries are still more portable- so much so that you could carry more than one and probably still come out lighter than with an external pack. Also, removable batteries mean that if you keep your phone for longer than the life cycle of the battery (and with the speed at which this industry moves, that means you really love your phone), you can replace the spent power source without paying a technician to do it for you.

Edit: As Andrew rightly points out in our comments, another advantage to removable batteries is a quick recovery from OS crashes. Even though many platforms include support for a hardware-button combo-press that serves the same function, sometimes a “battery-pull” is the only solution to a hard lockup.

But customers continue asking for smaller, lighter, thinner mobile devices, and more manufacturers are saying that embedded, non-removable batteries are the only way to accommodate those designs. So unless your occupation includes needs so specialized that an external battery pack is an impossibility, my advice would be to seriously look into them. They’re an accessory you might be purchasing sooner than you think.

Also, they often feature pretty lights on the side, so … you know. There’s that.