Why Are We Still Using SMS?

It’s not just the price-gouging aspect that’s making the future of SMS dubious; it’s its inherent limitations. Text messaging is almost twenty years old, and it’s beginning to show its age in some inconvenient ways.
Published 17 May 2012, 14:37 EDT

Earlier this month, Verizon Wireless announced that it was targeting a date sometime in 2013 for delivery of a new service to its customers. The new feature isn’t a high-speed data option or device upgrade policy, but something much more mundane or critical, depending on your perspective: an SMS-to-911 backbone. Developed in partnership with TeleCommunication Systems, the system will allow customers in the United States to send SMS text messages to emergency-response call centers. This is something that’s been in the works for a very long time, and it makes a lot of sense: I’ve talked about how much I favor SMS over voice calls in a previous Brutally Honest Question Corner, but there, I was talking about socialization habits and our changing communication landscape. The ability to send a text to summon emergency police or medical help could actually save lives, and I’m all for it.

The problem: around the same time, across the demilitarized zone separating the two largest U.S. wireless carriers, AT&T Chief Executive Randall Stephenson shared some frank observations regarding his company’s management of the iPhone. Most of the talk concerned the wisdom of offering unlimited data, but Stephenson at one point broadened his scope to talk about disruptors that rocked AT&T’s boat: “Apple iMessage is a classic example,” he said; “If you’re using iMessage, you’re not using one of our messaging services, right? That’s disruptive to our messaging revenue stream.” 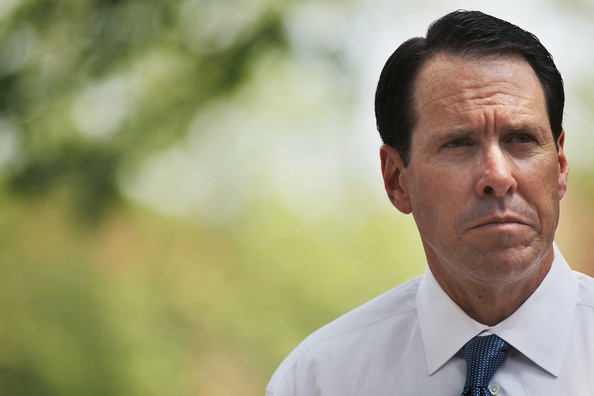 That’s a face that says “stop disrupting our stream.”

Absolutely it is. Both Verizon and AT&T charge contract customers $20.00 per month for unlimited SMS messaging, and almost 100% of that is profit: it costs next to nothing for carriers to provide SMS ability to their customers, as the messages are sent over the network’s control channel, which uses the same amount of bandwidth whether it carries a message or not.

Since I have a problem with price gouging, particularly when I’m the one being gouged, I use Google Voice. It serves as an intermediary, passing text messages over my carrier’s data connection instead of through the control channel, obviating the need for a SMS package. In that way, it’s a lot like iMessage. I’m one of the people keeping Randall Stephenson up at night, and to be honest, I kind of like that.

At the moment, though, I’m in the minority. Traditional SMS still outweighs data-based messaging by a long shot. In the U.S. alone, over a trillion text messages were sent in 2011; it’s in higher demand than it’s ever been. 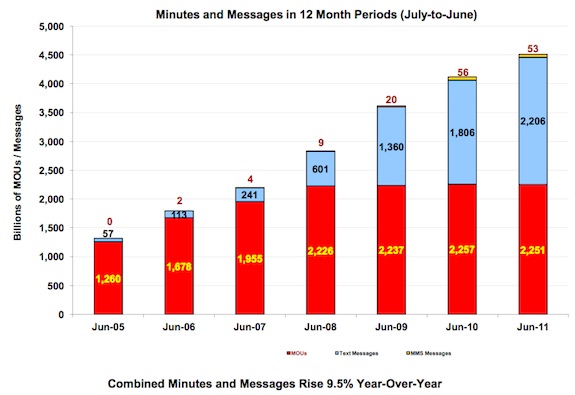 Not so fast, though: Stephenson’s remarks on messaging led the New York Times to link to another story on wireless metrics, this one from a few days previous, showing some interesting trends. Independent mobile analyst Chetan Sharma’s study showed that, while text message traffic was still growing in the United States, it was doing so at a slower rate than before. Furthermore, SMS usage in another top-texting part of the world, the Philippines, was actually  dropping. Sharma pointed to services like iMessage and Google Voice as possible sources for the falloff.

It’s not just the price-gouging aspect that’s making the future of SMS dubious; it’s its inherent limitations. Text messaging is almost twenty years old, and it’s beginning to show its age in some inconvenient ways.

SMS stands for “Short Message Service,” with the operative word being short. Because they need to be svelte enough to fit in the narrow confines of the wireless operator’s control channel, text messages are limited to 160 characters. By itself, there’s nothing wrong with that; brevity is the soul of wit and all that, and services like Twitter have proven that we can manage just fine with even fewer available characters.

But SMS has evolved from a sometimes alternative to the phone call, to the preferred means of communication of generations of users who grew up using instant messaging services. Formerly a useful reminder that if you had more to say, maybe you should call, the 160-character limit is beginning the hobble the usefulness of SMS … particularly when it comes to those infernal out-of-order multi-part messages. 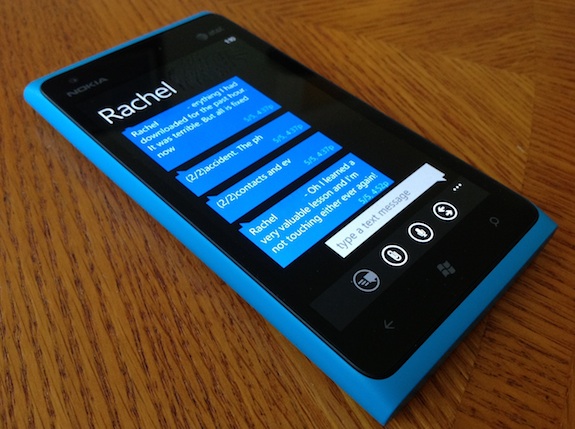 It’s not your fault, Rachel.

Ever since AOL Instant Messenger opened a generation’s eyes to the wonders of instant messaging, there have been status indicators. A simple available/busy/offline selector eventually evolved into a whole array of options for telling the world just how able and willing you were to talk. Away messages became an art form all their own. 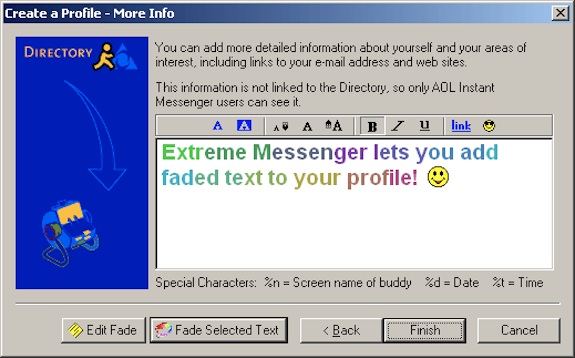 Along with all the tackiness that implies.

SMS offers no provision for any of that. Granted, it saves us from looking at pastel-text train wrecks like the one above. There’s also the implicit assumption that text messages convey information that’s (usually) less time-critical than a phone call; that’s still hanging on. But a simple presence indicator would go a long way toward bringing text messaging into this decade.

MMS Does A Lot Of This Better

Text messaging was late to gain relevance in the United States. When it started to take hold, it did so first via an array of web-based messaging services offered by carriers. As these started to give way to mobile-originated messaging (meaning messages composed and sent by a mobile phone without the aid of its web browser), most wireless providers went with SMS, as it was the standard the rest of the world had embraced. But it wasn’t the only option out there.

For a short time, rival services like EMS (“Enhanced Messaging Service”) and MMS (“Multimedia Messaging Service”) battled for the spotlight. Both offered extensions to messaging functionality like special text formatting, expanded character limit, and the ability to transmit media. MMS is still widely used as the picture- and video-messaging standard across the world, while EMS has since faded away into obscurity. 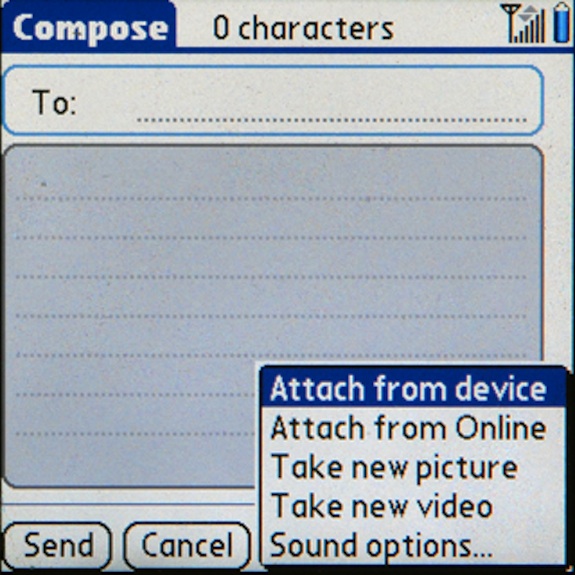 Had the industry migrated directly to MMS as the new standard, it would have meant more data usage and more work for the carriers. Indeed, early experiences with MMS were anything but smooth for carriers and customers alike, as the network-side implementation was completely different, and media compatibility concerns were obviously more complex than with SMS, where there’s no media to speak of. Finally, it would have cost carriers more to implement, without the windfall that they’re getting from SMS today.

But had MMS supplanted its older sibling, we’d be living in a world of 1000-character messages with bold, italics, and underlines. If that doesn’t get your stove crackling, mobile-tech-enthusiast, I don’t know what does.

There are a lot of positives to SMS. As I mentioned, it’s been around for almost two decades. That’s a long time, and it’s allowed usage to trickle down from the leading technology-rich countries to developing nations. Because it’s a popular standard, it’s used for all manner of transactions and utility applications, and it’s built in to nearly every mobile phone that exists. If you own a phone with a display screen and keyboard, it can text. That kind of simplicity and widespread adoption is what makes standards great. 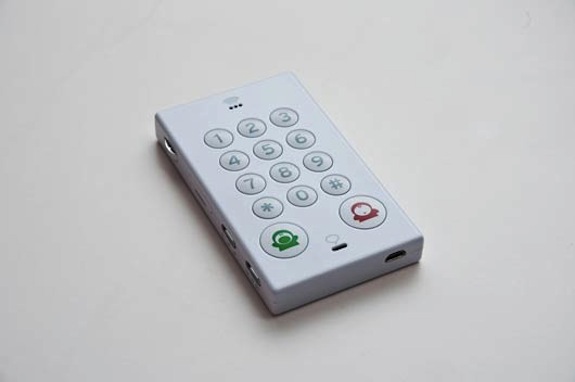 Unless you’re a super minimalist.

Another great thing about such an aged technology is that companies have had time to optimize it. For the sheer volume of texts that are sent every second, SMS reliability is exceedingly high. And as the trickle-down effect continues, companies like TeleCommunication Systems are going to bet on that as they provide their SMS-to-911 service, surely one of the best examples of how seriously reliability of message delivery is now taken.

Finally, SMS is simple. It doesn’t require a data connection, so it can be implemented on even the most rudimentary networks. Also, because it’s generally unaffected by all but the most severe network loading, it’s not prone to the same outages that voice calls and data sessions are.

Hope For The Future

So, SMS is great in a lot of ways. I’m not saying we should abandon SMS for some platform-specific solution like GTalk or iMessage or (LoL) AIM. Standards aren’t always perfect, but they allow for interoperability, and in this world of increasingly proprietary thinking, that’s a great thing. What I am saying, though, is that SMS is antiquated, and we need to evolve to a next generation messaging solution.

That’s probably not going to be email (though it could be, if specialized lightweight email clients came back into vogue), and it’s probably not the abortive “enhanced messaging” platform the CTIA announced way back in 2008. It may well be a modification of that platform, or a derivation of an existing IM product, or something entirely new from left field. 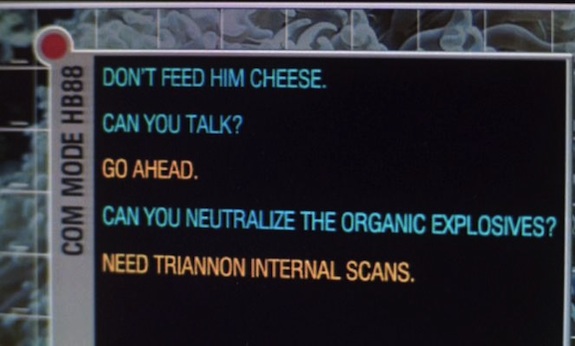 Maybe Starfleet will save us.

Whatever road messaging takes going forward, it’s going to be a long one. If its past reliability is any indication, SMS can keep humming smoothly along in its current state, making all kinds of money for wireless carriers and giving users the same bare-bones messaging options they’ve had for years. And the carriers will fight tooth and nail to keep that status quo intact. But look at the usage trends as more consumers realize that there are other options out there. A company or a consortium with foresight will see an opportunity to jump into that gap to serve the needs of a more demanding messaging audience, and we’ll soon have another standard vying for attention.

What’s your take on the future of messaging? Do you have something specific you want to see implemented? Are you happy with SMS the way it is? Do you think texting is stupid to begin with? Drop us a line in the comments and share your thoughts!

Rocking a MIL-STD 810H-compliant build, the Acer offering is priced at $329.99 for the base model and it will go on sale starting April.