Post-peak, where will Pokemon GO’s bottom be?

At its peak, Pokemon GO had over 40 million users. But that was a month ago. Now it’s three-quarters of that. Where will decline take this viral hit?

Pokemon GO’s first month has seen stellar growth that Nintendo couldn’t have imagined. The Pokemon Company and Niantic were riding the coattails of this windfall as did what we found out to be contingent markets.

But the party has to be done soon, right? Every viral product has that top notch it hits early on before slinking towards mediocrity. As such for Pokemon GO, we have to ask where that mediocrity is. 40 million daily active users is a lot to start paring off from.

Axiom Capital Management has been tracking usage data from Sensor Tower, SurveyMonkey and Apptopia. The firm claims that the numbers for daily users, downloads, engagement and time spent in app are all headed down. 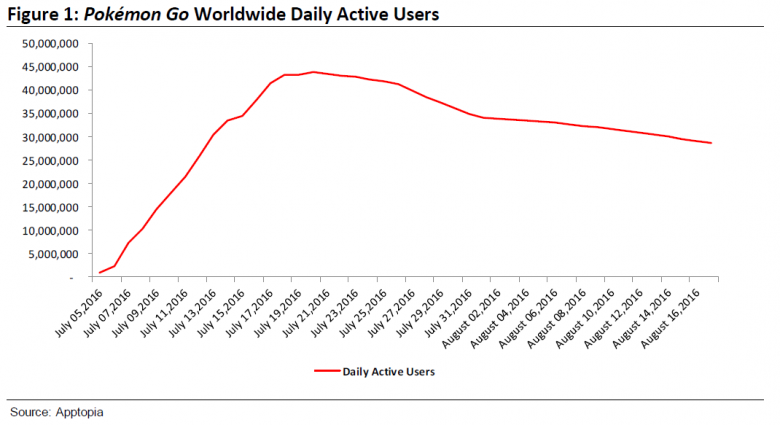 The game’s Daily Active Users has dropped from about 44 million at its peak on July 21 to about 32 million as of August 18. The decline became just a bit slighter from a rather precipitous period in late July. 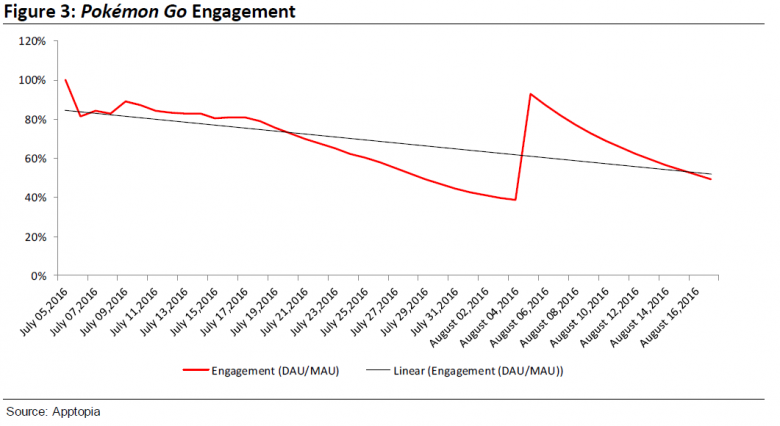 Finally, mapping Google search trends to the terms “virtual reality” and “augmented reality,” we find that while Pokemon GO peaked AR’s popularity, it has dropped back to just above its levels prior to the game’s debut. It is still nowhere near as searched as VR.

New features and a new peripheral may be able to perk up retainment from time to time, but is Pokemon GO over?