The question I get asked more than any other is “what do you have on your phone?” That’s a great question! What does Joe the Android guy have on his phone?

One question I get asked more than all the others is “what do you have on your phone?” Sure, people wonder what phone I have, who my carrier is, how much I pay for my plan every month, what my favorite accessory is, and a whole slew of other things, but eventually it all comes back to that singular question: what does Joe the Android Guy have on his phone?

Over the last month I’ve switched between the Nexus 5, the Asus PadFone X, HTC Desire 816, HTC One mini 2, HTC One M8 harman kardon edition, and even the Moto X – and that doesn’t include tablets and wearables! Each of those devices has very different specifications, and very different target groups. One thing that remains pretty much the same is the set of apps that I run on each.

Google has set Android up such that you can backup your configuration (including installed apps) to the cloud. The next time you set up a device (whether that’s due to factory resetting your old phone, getting a new phone, or comparing several at a time like I do) Google can remember your apps, and automatically re-download and install them. Nice! 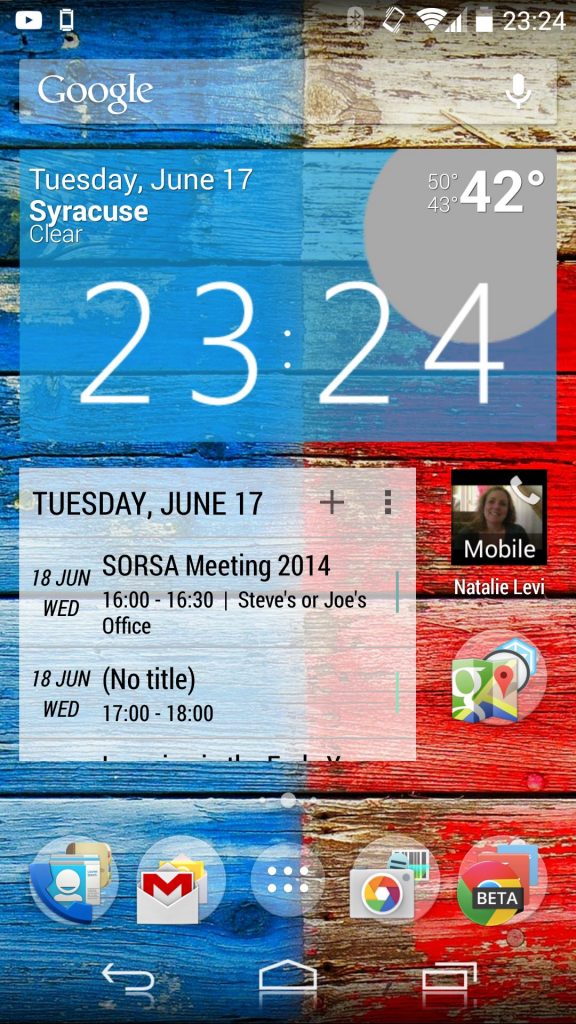 Of course, homescreen layouts, credentials, and various options need to be reconfigured (which is no small task), but the hard part pretty much happens automatically.  Over the years I’ve settled upon a fairly consistent set of apps. As time passes some of those will fall off my list and new ones are added. The core, however, has stayed almost the same.

Whenever I can, I revert to the Google Now Launcher (formerly called the Google Experience Launcher, or GEL for short). It’s not yet available for all phones, but it can be sideloaded very easily.

I have to stick with the stock launcher on devices that I review, but for those that I’m going to be running long-term, it’s the Google Now Launcher all the way.

I use folders and widgets a lot. Combining the two, I’ve been able to limit my homescreens to just two panels. On my main panel I have the stock Google search bar so I can quickly find whatever I need, either by typing my query or simply saying “OK Google” followed by whatever I’m looking for.

Below that I run a 4×2 (or 5×2) Beautiful Widget that includes the day, date, time, current temperature and conditions, and the day’s high and low temperatures. Running this widget also provides me with weather alerts in my notification shade which come in very handy for a guy with a garden.

Below that I run an agenda widget by Jack Underwood called Today- Calendar Widgets. Anyone who’s familiar with how PocketPC and Windows Mobile presented the Today Screen will instantly love this widget. Jack’s got a trial version so you can make sure it does what you want before you drop a few dollars on his paid version. 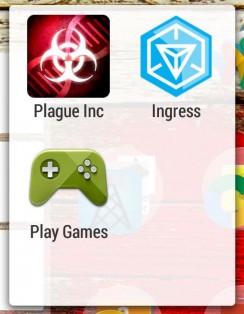 To the right, I have a direct dial widget so I can call my wife with one button press – and I get to see her smiling face every time I look at my homescreen. What? There’s nothing wrong with a guy being a romantic!

Here’s where I also have my first folder. In it I have keep all the map and GPS related apps that I use:

On my second panel I have another widget, this one is two tiles wide and full-height to display my Google Adsense revenue by date: today, yesterday, so far this month, last month, and lifetime. The right side is occupied by two rows of folders. 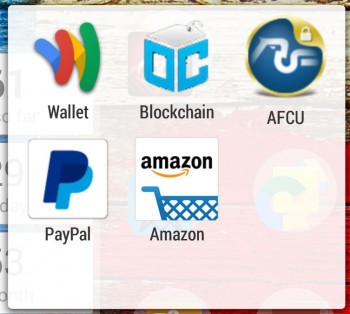 The first folder holds the games I’m currently playing: Plague Inc. and another shortcut to Ingress.

The second folder holds my wallets and financial apps:

Next, since I’m a HAM Radio operator, I have a folder with some tools that I use: 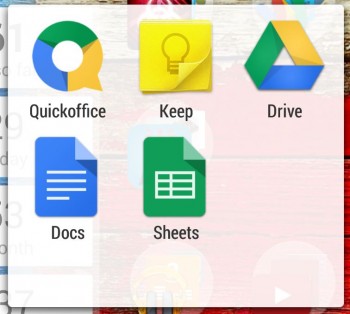 Finishing out the second row are my office apps:

My next three folders hold all the apps I use to listen, watch, or read:

Last, but certainly not least, is my favorites tray. As its name implies, this is where apps that satisfy your most common activities should live. From left to right, here’s what’s in mine.

In position one is a folder which contains Phone, People, Hangouts, Google Voice, Skype, and a neighborhood directory.

In position two is a folder which contains the two apps through which I get all my email: Gmail and the Email app for my Exchange messages.

The third position is the App Drawer.

In position four is a folder that contains the Google Camera app, Hi-Q MP3 Recorder (for audio recordings), Barcode Scanner+, Rec. (for screen captures), Photos (from Google+), and the stock Gallery app. 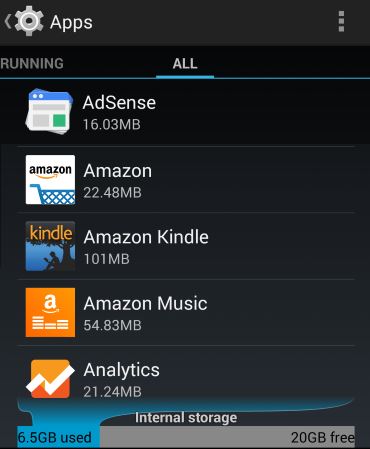 There are a few other apps that I have installed, but what I’ve listed so far are what have earned shortcuts on my homescreens. Pebble, Automatic, Nest, Pushover, and IFTT are apps that run all the time. Google Authenticator is there whenever I need two-factor authentication.

On devices that I have the green-light to root I have BusyBox Free, SuperSU, Root Explorer, ClockSync, StickMount, SoftKeyZ, and SQLite Editor.

Microsoft’s RD Client enables me to connect to the computers and servers at my day job from anywhere I have an Internet connection. Various benchmarking, diagnostic, and signal analyzer apps come and go.

All told I have 6.5GB used with 20GB internal storage free on my Nexus 5. That leaves me with plenty of room for games, music, movies, and even more apps.

Again, depending on the device, I may have more or less apps installed at any given time, but this is a pretty good summary of what I have loaded most of the time.

What are you waiting for? Head down to the comments and let me know!