What would Steve Jobs say about the new iPads?

When Steve Jobs announced the iPad in 2010, I do remember that he never really used the phrase “Apple is re-inventing the tablet” as he did when the company launched the iPhone. Still, Apple’s bet in actually focusing on portability and affordability to make this tablet a mainstream product, and not a niche and expensive one, like Microsoft had, was a bold bet all together. We all panned the iPad when it was announced. I remember that it took me a full 11 months to decide to buy one, simply because I found no reason to buy a big smartphone. I kept repeating to myself that I didn’t need it.

Now the rest of the world didn’t see it that way. They ignored our reviews and advice, and flocked stores to buy one. Back then, anything was better than a Netbook, and with the success of the iPod and the iPhone, a lot of people trusted Apple with their money. Today an iPad might seem expensive when compared to a Nexus 7, but in 2010, it was less than half the price of a Windows tablet, and that’s why it sold like hot cakes, even if people didn’t really know that the iPad wasn’t even a worthy competitor to a Windows tablet. It was such a disrupting product, that even Microsoft changed their own strategy to the Windows 8 we know today.

Sadly, the last time Steve announced an iPad, it was the iPad 2. Just 11 months after the first tablet, they completely redesigned it, and it has remained Apple’s most popular and best-made tablet, so much so that they’re still selling it three years later. Surely it was the same iPad with a new chassis, but it proved how aggressive Steve wanted to be about the tablet market. He didn’t just want to win, but he wanted to win by a margin that competitors would struggle deeply to catch up to.

Still, you could say that the iPad 3 and 4, and even the iPad mini haven’t been as hot as it’s two older brothers. Just last quarter we saw Apple’s results showing that the only product where they didn’t grow during the period, year-over-year was in iPads. The market keeps growing, and even if most of the Android tablets in the market are still not worthy of your wallet, and even with all that Retina Display goodness of the third and fourth iPad, the market keeps growing towards different options. This is a time that requires even more aggressiveness from Apple, and sadly I don’t think we saw that today.

We can’t pretend to know what Steve would’ve said about this if he were still the company’s president while Tim Cook focused on the operational side of things as CEO, but judging by Steve’s performance with the iPad 1 and 2, here is what we think he would say about the new iPad Air, and iPad mini with Retina display: 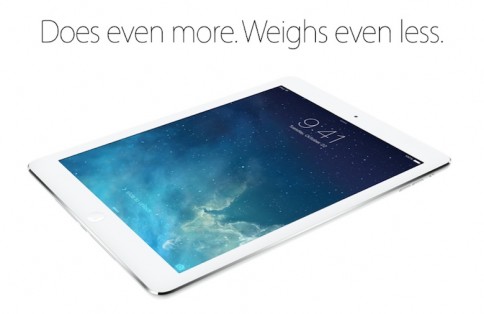 Currently Apple’s Macbook line-up has the Air as their entry-level computers, which are really powerful machines and all, but not as powerful as the Macbook Pro line-up which are Apple’s high-end computers. We’re still scratching our heads over why Apple is doing things the other way around with their iPads? If anything, iPad 5 or simply iPad would’ve been enough of a name, but why use the name iPad Air?

Do any of you find the name iPad Air to be catchy? We all struggled with it in today’s Editorial Roundtable. We can’t deny that we like what we see when it comes to design, and it’s also great that it keeps the price tag of all the previous iPads, but other than a new design and a new name, there’s nothing here to see folks.

Those iPad minis are boring and non-competitive!

As much as most of us here in Pocketnow have wanted an iPad mini with a Retina Display, there’s no real reason to buy it. Why on earth would you pay for the price of two Nexus 7s that are just as powerful, have the same pixel density, and the full support of Google? I’m not kidding, $399 for a Retina Display iPad mini is just dumb, and there’s no real reason to buy one.

And to keep the old iPad mini another year is yet another mistake. We go back to the fact that it’s almost a full $100 more expensive than a Nexus 7, and it’s quite inferior when compared to it. Forget about the specs, and just focus on the display. The display is everything on a tablet, since that’s what you mainly interact with, and there’s no real point in paying so much money for a lesser tablet experience. I’d rather put-up with a bloated twitter app that scales better in pixel density, than a pixelated experience that just looks nicer in design.

Where the heck is Touch ID?

So with iCloud keychain, and with Touch ID making it to the iPhone 5S, we still can’t understand what went wrong here. If there’s a product where I’d prefer to have a fingerprint scanner, it’s on a tablet or computer. I personally feel that I’d store more sensitive information on my computer than on my phone, and I’d love some state-of-the-art protection for it. There were so many leaks of this, and it didn’t make it to the final product.

Yes, you can’t re-invent the wheel every day. Still, products like the iPad don’t really require re-invention, they require innovation. I’ll admit that after making the mistake of buying an iPad mini last year, I’ve learned how much I really don’t need a tablet, and I keep noticing this trend in my friends and family. It’s a cool product to have, but it keeps becoming less appealing unless it’s affordable enough to not give you a hard time deciding.

These are very different times for the iPad. When Steve announced the iPad 2, the Kindle Fire didn’t exist, and neither did the Nexus 7. The same can be said about the Galaxy Note line-up, which even includes their phablet. Windows 8.1 didn’t exist, and neither did the Microsoft Surface. I’m sure that if Steve were still here, he wouldn’t be sitting on his laurels with iterative updates.

The iPad needs to be hot again, and sadly a redesign and that price-tag are just not cutting it. Do you agree that the iPad has lost its luster this year, or are you buying one? I’ve definitely lost excuses to upgrade to the new Nexus 7, and that’s what I’m going to do, but be sure to leave us a comment over your next move.