Gadgets galore: what we’re bringing to IFA 2013 in Berlin

It takes lots of gadgetry to cover a gadget-heavy show like IFA 2013 in Berlin. Here’s the glut of geekery Pocketnow is packing for Fall’s big tech show!
Published 02 September 2013, 17:09 EDT

Psst. Want some behind-the-scenes info before you read this behind-the-scenes article? If that’s not too meta for you, peep this: we were recently forced to rename an episode of the Pocketnow Weekly podcast, less than an hour after publishing it. The reason? The same reason which drives most action on the internet, of course: “moar clicks.”

You see, episode 059 of the Weekly was our IFA teaser episode, the podcast where we sat around and talked about what we expected to see at this year’s Internationale Funkausstellung Berlin, better known as the “Berlin radio show” (and even better known, around these parts, as “that annual show where Sony and Samsung unleash the hotness”). Managing Editor Anton D. Nagy and I will be covering this year’s IFA live from Berlin, while the rest of the Pocketnow team backs us up from their offices around the globe. We expect to see some pretty awesome stuff in Berlin this year, most notably Samsung’s Galaxy Note III phablet and Galaxy Gear smart watch, as well as Sony’s Honami and camera lens accessories, along with a bunch of other tech that won’t see retail availability for months.

But despite the pure awesome that flows from this funky Funkausstellung each year, it turns out that “IFA” isn’t a terribly popular internet search term. It seems people care a lot more about the devices announced at the venue than the venue itself, which is why we renamed our podcast episode’s YouTube stream to something a little more gadget-y.

Anyway. The point is: IFA is about gadgets, and it turns out that covering the gadget industry takes … a lot of gadgets. If you think that’s a recipe for some kind of gadgetry-fueled geeky feedback loop – you’re right. And it’s awesome. It’s so awesome, in fact, that we thought we’d show you what we’re bringing to IFA, in a post directly inspired by this awesome thread over at the Pocketnow Forums.

Here, then, is the list of equipment it takes for Pocketnow to properly bring you all the latest and greatest from the IFA show floor. (And, just in case you’re thinking of robbing us, allow me to direct your attention to the stone-cold gaze of seven-foot Anton D. Nagy in the photo above. Rethink your life, would-be rustler.)

We obviously need to communicate, both between ourselves and with the home office, while darting between the various exhibits on and off the trade floor at IFA, and while taking in the sights in and around Berlin during our limited time off. To that end, Tony will be carrying the iPhone 5 and Nokia Lumia 925 during his time in Germany, while I’ll be rocking my trade-show favorite, the long-lasting Galaxy Note II, alongside my preferred pocket shooter, the Nokia Lumia 1020.

We’ve got a lot of hardcore computing power back in the home office, but for the road, we need light notebooks with solid power and endurance – and the 2012 MacBook Air continues to serve us well. From writing editorials and news quips to editing video in Final Cut Pro, Anton and I covered all aspects of both IFA 2012 and MWC 2013 with this combination, and despite the roar of overworked cooling fans and a pervasive odor of ozone filling our mobile office, the job got done. 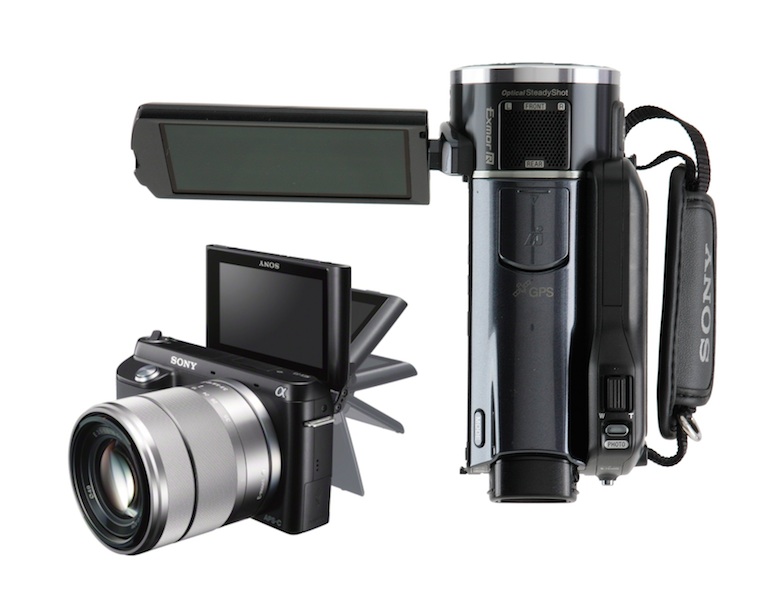 Just as our computing hardware list is dominated by Apple, our photography sector is all-Sony. Specifically, a Sony HDR-XR550VE camcorder (with lapel mic) for show-floor video, and a Sony NEX-F3 for stills, second-angle coverage of feature videos, and some of the fancier stuff we may or may not have an opportunity to capture. Fun fact: these are also the cameras we use to capture a lot of Pocketnow video from our offices, and they’ve proven staunchly reliable companions – even if they’re not as flashy as some of their newer cousins out there. 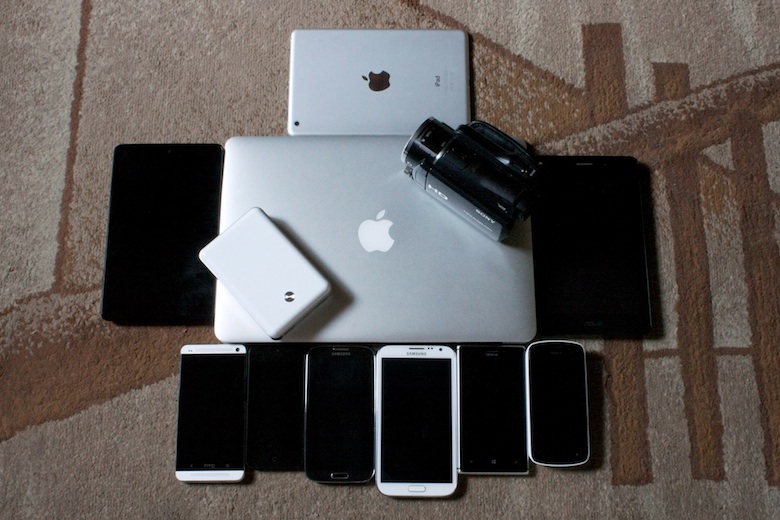 From co-starring in on-air comparisons to the more mundane roles of on-site backups and on-plane e-readers, our assortment of additional smartphones and tablets for this trip is vast. Between the two of us, we’ll be using the following: 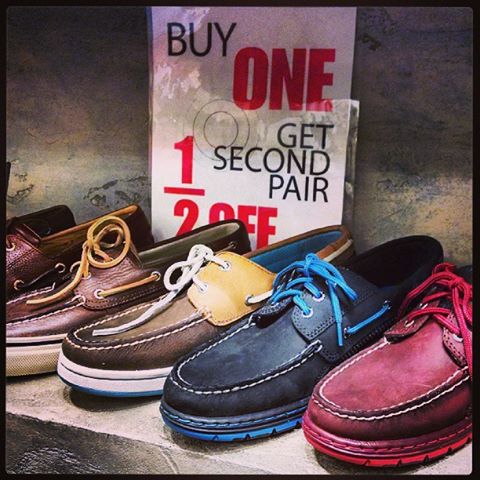 There’s nothing worse than covering a show in non-supportive shoes (or in sharing a hotel room with a teammate’s stinky six-month-old S-kickers), so I took the opportunity to invest in a new pair of Sperry Billfish topsiders – a style that splits the difference between arch support and the sailor-lost-on-land aesthetic that I witlessly crave.

As this trip also serves as an opportunity for Tony and me to exchange cultural hallmarks, he’s bringing some of his family’s famous zacusca for us to share while hosting our Berlin-edition episode of the Pocketnow Weekly, and I’m countering that offer with some freshly-ground Dunkin Donuts coffee. (As usual, I think I’m winning in the exchange department.) 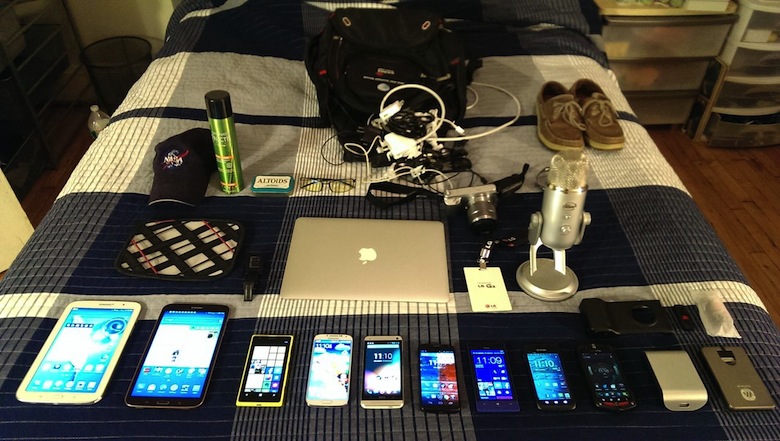 There are no doubt devices and particulars we’ve forgotten here, but we need to find a way to fit this entire inventory into our limited supply of Halliburton cases, and then we’ve got to get the cops to come down and handcuff them to our wrists while installing the retina-scan equipment, so we’ve got to go.

If you’ve got questions or comments about our equipment load, or you’ve got suggestions or special requests for coverage at IFA, drop them in the comments below – or start off a new thread over in the Pocketnow Forums. And be sure to follow us at our various homes on social networks so you don’t miss all the unveilings, podcasts, and hands-on videos from Berlin! Finally, check out what IFA was like last year to get an idea for what’s in store for you. And hold on to your butts: our coverage starts the day after tomorrow.