What is your 2015 smartwatch du jour?

Smartwatches are a blossoming category, especially now that all three major platforms have their own. Apple introduced the Apple Watch, Microsoft introduced the Microsoft Band, and Android introduced a flood of new smartwatches seemingly weekly as Android tends to do. Couple that with the more platform agnostic offerings of Pebble and there’s actually a few decisions to be made here.

If you’re on iOS, you can decide between pricey and super-pricey Apple Watch offerings or the aforementioned Pebble. On Android Wear there are no options ranging from $200 up into the thousands, and of course Pebble as well. On Windows Phone, well, there’s the Microsoft Band. So Windows Phone is more of a true/false binary decision, but still there’s an option, which is cool. 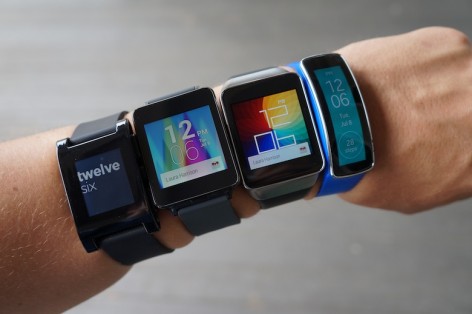 So if you’re not in the market for a smartwatch, this post really isn’t for you. We’re not here to argue whether they add value or not (spoiler alert, they do). We’re assuming for the moment that you’ve chosen to get a smartwatch and now you have to decide in which direction to go.

Having used both Android Wear and Pebble (although not the new timeline interface), I can honestly say they are both super-solid offerings. They do offer advantages over each other, but if you’re in the market to buy a smartwatch, you’re already pretty familiar with those. What I’ll tell you if in my case it comes down to voice control versus not. And that’s not even the case any more with the Pebble Time.

There are a lot of decisions to be made about the smartwatch which is a good problem to have. Steel, leather, or silicone bands? Round or square? Lots of things go into a choice like this. I’m a fan of the round interface, but I’m back on Android and I haven’t switched back from the Pebble to the Moto 360 yet, so there’s that. Overall it comes down to a personal choice of what you like. So we wanted to ask you, what is your smartwatch for 2015?

For the purposes of this poll, and in deference to Android Wear’s and Apple’s ~many~ offerings, we’re leaning more toward the general side, but it should be enough for you to get your point across. If you want to talk more specifically, that’s what the comments are for!

As for me, I’d go square in the sub-$200 category. I’m a believer in the Pebble Time until my experience says otherwise. The Moto 360 is a great watch, but I can get 90% of the functionality for 60% of the cost and that’s not insignificant. But to each his/her own so let’s hear it. What are you looking to get?

Facebook is well immersed in VR and AR, which is why it isn’t surprising to see its futuristic vision of remote work relying heavily on these technologies.