A week with the Microsoft Surface Pro 3

I set out to accomplish what my colleague had tried and failed – spend a week with the Surface Pro 3. It had its challenges but was a great experience.
Published 23 July 2014, 10:00 EDT

A few weeks ago, our intrepid reporter, Taylor Martin attempted to use on the Surface Pro 3 for one solid week, forgoing his typical writing machines in favor of the Surface Pro 3. He didn’t quite make it. In Taylor’s defense, there were some unforeseen power issues, and Taylor reported that in his piece. But at the same time, he also wrote about how the user experience of the Surface was a bit too disjointed for him to successfully use the tablet on the regular.

Ok, fine. Windows 8.1 has some issues. But were they so bad that a user couldn’t get along after, say using a Macbook Air exclusively for seven months? I was determined to find out.

There are a few things you need to know about this going in. First, I couldn’t really use this tablet for my day job exclusively. I work for a software developer by day, and our software is primarily iOS and Mac based. It’s true a lot of my work is done in a browser, but there are a lot of local files I need to reference daily and it simply wasn’t feasible to transfer all of that stuff to a device I would only have for a few weeks. So my use of the Surface as a daily driver was limited to Pocketnow stuff and casual home use. There was some research, some writing, some movie watching, etc. But I never did take this to a Starbucks and bury my head in it.

Second, I really did have to re-learn Windows 8. I had used it for some time on the original Surface RT for most of my writing and research, but most of my Windows time has been with Windows 7. So I definitely had some catching up to do.

I was determined. I decided that for one week, I would leave my Macbook and iPad at work and just commute with the Surface. I started off on a mini-vacation with my son and the Surface. At first, I wasn’t sure. One of my biggest hang-ups is the placement of the Control key as compared to the Command key on the Macbook. I live by copy and paste and that was just silly. But I adapted pretty quickly. By the time we got home, I was not doing bad. The transition from Desktop to Modern was not so jarring. It just was.

I started commuting on Monday again and that’s when I really got nervous. I had no less a Pocketnow work load now that I was using the Surface. In fact, I had more. The train is where I get my stuff done. How was this thing going to work?

Initially, I had some trust issues. In order to comfortably type, I had to have the Surface pretty far out on my lap. My wrists only bend so far after all. I was convinced this thing was going to fly off my lap, through the handrail and plummet 8 feet down to the train deck below (I sit in the upper level). I knew it was going to fall. It never did. I took my hands off the keyboard, and still it held. This was completely unexpected. But even after a few bounces on the choo choo, it held. So, once I determined this puppy wasn’t going anywhere, we were ready to rock and roll. 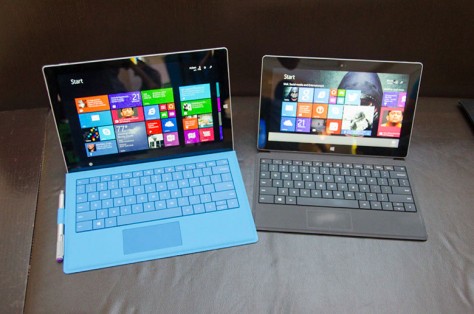 Every editorial I wrote last week was written on the train.  Every episode of Eureka – a very underrated show by the way – streamed on Netflix, every web page surfed and every email sent was on the Surface. Windows 8.1 is Windows 8.1. I’m not going so say it’s perfect. Far from it. But some of the things it does, it does so very well.

Multitasking for one is really done well in the modern interface. The side by side panels really do take full advantage of this tablet’s massive surface area (pun intended). In older versions of Windows, if one was looking at two things at once, windows were usually re-sized to look that way anyway. Swiping apps in from the left as a task switcher becomes second nature after less than a day. Tapping on the screen to place the cursor is such a great experience, I catch myself trying to do it on my Macbook, which hasn’t come home once since the Surface arrived. The digitizer has some pluses and minuses but once you get used to it, it grows on you quickly.

I’m not going to say the entire week was easy, or that there weren’t some struggles toward the beginning of the week. Nor will I say I’m no longer having issues. Ask Anton about our editorial call the other night and he’ll tell you an interesting story.

A week… or two

My “week” with the Surface Pro 3 as my daily driver is now into its second week, with no regrets. Maybe my personality is more forgiving than Taylor’s. Maybe my two lovely, darling, patience-testing children were good training for Windows 8.1 and some of the Surface’s more peculiar design choices. I don’t know. What I do know is that the Surface works great for me as a laptop and as a tablet. There are some trade-offs and sacrifices, but the gain is tremendous and I wouldn’t have it any other way. Based on usability alone, the Surface is officially a contender in the Doud family “we need a new laptop, what should we get?” race.

I guess Taylor’s just a wimp.