Check out the Pocketnow Week in Review for week 52, 2013, to see the most interesting, popular, and exciting topics of the week.

This week, week 52, happened to be the week of Christmas, so we’d like you to drop us a comment, telling us what gift phones or tablets did you receive, or make. Thankfully, there are a lot of extraordinary devices on the market today, so chances are you had a rough time deciding (or, on the contrary).

In an unusual, exceptional, manner, the most popular story for the week was our own site announcement. Our Editor-in-Chief, Brandon Miniman, took it to YouTube (and Pocketnow) to talk about the past, the present, and the future. That future doesn’t include Pocketnow, or at least not in a way you’ve been used to, as Brandon is stepping down as of January 1, 2014, and another Pocketnow-er is taking his place.

The Samsung Galaxy Gear, by itself, is a controversial gadget: you either love it, or couldn’t care less about it. The situation is roughly the same with the latest ad promoting the smart watch; reactions were mixed from the second it popped up on the internet. It’s about this guy who, opposed to the other guy who doesn’t have a Gear, tries to impress this lady in every way imaginable. Are you that guy? Do you know someone who is? Drop us a comment. We know what the Pocketnow team thinks about it! 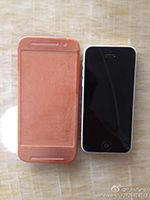 A picture of resin-3D-printed mockup of a phone popped up this week and the creator of the model not only claims it is depicting the upcoming HTC M8 (HTC One 2, HTC One Two, or whatever you want to call the 2014 HTC One), but is also telling the world that the model has been created with information received from someone who is familiar with the Taiwanese manufacturer’s plans. We don’t necessarily like the rounder corners and huge bezel on the bottom (where the buttons will probably be located), but, if memory serves, we didn’t like the initial One renders and mock-ups either.

Switching to Windows Phone for just a second, our own Taylor Martin opines on whether developers should be skeptical or not of Windows Phone. Yes, it’s the same old “app-gap” approach, but the fact is that some titles are still missing, and there’s definitely a reason for that, regardless of how well the platform performed (in terms of marketshare), this year.

Our time with the Jolla phone was short, but that didn’t stop us to analyze this newcomer as extensively as we could’ve. Michael Fisher not only unboxed it, and gave his first impressions, but he also managed to find five ways where Jolla “absolutely nails it”. Thumb-friendly navigation is one of them, but you’ll have to hit the post to read about the rest.

Many of our readers — especially those interested in mobile photography — asked for it, and our own Adam Lein delivered. As our resident professional photographer, Adam is taking a look at RAW vs JPG photography on the Lumia 1020. With the Black update pushed out to American units, the 1020 is capable of snapping RAW images; in his post, he tells you the pros, the cons, and how RAW compares to JPG in terms of quality, and edit-ability.

Back in Android-land, Taylor Martin tells you just how you can get the Google Dialer on your non-Nexus phone. There are instructions, screenshots, as well as opinion; in case you want to give it a shot, don’t miss our post!

A set of new rumors is trying to anticipate Apple’s plans for 2014, and, according to the latest chatter, the iPhone 6, which is rumored to have a larger display, might (or might not) land as early as May, which would mean Apple breaking its yearly announcement cycle. On that very same note, the larger-than-regular-iPad, dubbed unofficially the iPad Pro, might see the light of day in October next year. Read the rest of the details!

…and last but not least, the results of our yearly Pocketnow Readers’ Choice awards for 2013 are in. We’ve got winners and runner-ups in both smartphone and tablet categories. Check the post to see what’s the best phone and tablet, according to YOU, the readers.

Below you’ll find of our most popular videos this week. Maybe you want to start by getting your Pocketnow Daily fix, or by watching the Daily recap.

We’ve got a ZTE Nubia 5 review, more Jolla coverage, an HTC Touch Pro 2 throwback, and our site announcement for your viewing pleasure. You can, of course, be among the first ones to see our videos by subscribing to our YouTube channel, where you’ll definitely find something interesting every day.