Waterproof phones are useless without a waterproof interface

Waterproof phones like the Galaxy S 4 Active are an excellent step forward, but until we can control them when wet, they’re not as useful as they seem.
Published 02 July 2013, 12:59 EDT

Growing up on sailboats gives you a few useful skills. You learn to stand on wobbly ground a little better than your friends, to duck quickly without asking questions, and you learn to appreciate beer from a can, rather than a fragile and unwieldy bottle. You also develop a heightened affinity for electronics that can withstand the occasional sea spray or temporary dunk: on a boat, a waterproof phone can be a real lifesaver – particularly if it’s not saddled with the added bulk of a case.

My first such device was the Motorola V950 Renegade, a flip dumbphone from Sprint that catered to the rough-and-tumble Nextel crowd. The device was certified to MIL-STD-810F for the usual gamut of shock and impact resistance, imperviousness to solar radiation, and the like – but the real draw for me was its ability to withstand blowing rain, humidity, and salt fog. That meant the Renegade could stand up not just to the nautical lifestyle, but to more domestic situations as well: getting caught in the rain. Getting spilled on at the bar. And yes: texting from the shower. Which is fun. No matter what Joe Levi thinks.

What possible relevance could a 2008-era dumbphone have to the waterproof smartphones of 2013? The answer is as bizarre as it is succinct: in some ways, the Renegade did the job better.

This realization came to me last week when, doing some water-resistance testing in the course of our Galaxy S 4 Active review, I discovered that the device becomes utterly useless when the display gets even the slightest bit wet. I’d seen the behavior already in our hands-on video from London, but I didn’t realize just how sensitive the device’s screen was to moisture until I handled it myself. Responsiveness starts getting unreliable with a thin film of condensation, and goes straight to crazy-town when wet fingers are introduced.

It’s not just the Active that suffers from this problem: the Xperia Tablet Z can be seen engaging in some pretty wild software calisthenics when it goes beneath the waves in our review, and the modern successor to the Motorola Renegade, Sprint’s Kyocera Torque, has the same issues. Most capacitive-touch displays just aren’t designed to deal with the challenges that moisture brings. And while there are techniques like wet-finger tracking and water-rejection to help combat this, as this article from EETimes explains, they’re not widely utilized yet: of the units that have crossed our desk, only Sony’s Tablet Z and Xperia Z have incorporated the technology – and it’s nowhere near as effective as physical hardware controls.

On the Active variant of its Galaxy S 4, Samsung combats this problem by replacing the capacitive back and menu keys with physical buttons, and by reassigning other buttons like the volume rocker to camera duty while in Aqua mode. Kyocera’s Torque makes use of a dedicated camera key for the same purpose. These measures are helpful for the narrow purposes of taking photos and manipulating very limited corners of the software, but the problem is that these are Android smartphones we’re talking about: the touchscreen is essential to even the most basic activities. It’s no exaggeration to say that it’s impossible to check a text message on the Active when it’s wet – to say nothing of sending one. By contrast, performing these actions on the five-year-old Renegade were easy as pie, whether the device was bone-dry or soaking wet.

That doesn’t mean we need to return to the days of numeric keypads and clamshell form factors (no matter how much we may miss the latter): the touchscreen forms the backbone of the modern smartphone industry, and that won’t be changing anytime soon. It also doesn’t mean manufacturers need to radically reinvent the technology that drives those touchscreens. Rather, maybe the answer lies in learning how best to augment those screens with physical controls, at least on phones designed to take a dip every now and then. 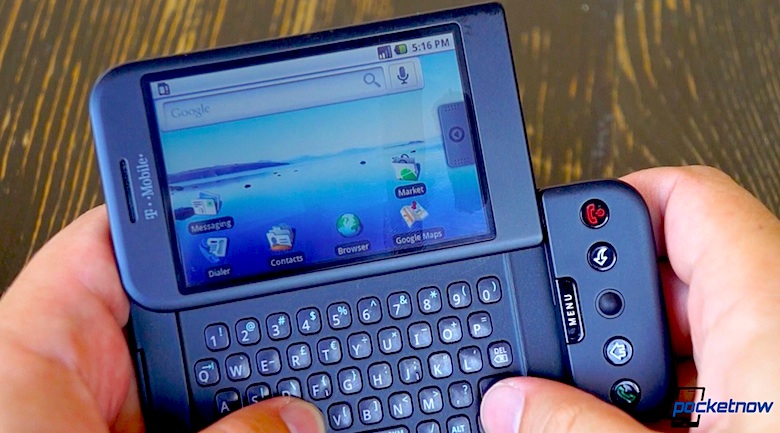 Take a gander at the HTC Dream/T-Mobile G1 above. In our recent Throwback Review of this device, we called out the control collective on the “chin,” pointing out that the G1 could be controlled in a number of ways besides swiping on the touch screen. The trackball could be used to manipulate the UI much like a PC’s mouse, while physical home, back, and menu buttons offered quick shortcuts to those essential functions. Dedicated send and end keys were thrown in to make phone calls possible without laying a finger on the capacitive panel. And topping it all off: a full, physical QWERTY keyboard.

I’m not saying Android phone-makers should regress to this BlackBerry-aping control paradigm for all their devices, but what would be the harm in an OEM like, say, Kyocera tossing a trackpad and a few more physical buttons onto a revised Torque, then writing an Android skin to take advantage of the added controls? When the phone entered waterborne mode -either manually or automatically- the physical keys and trackpad would take over for the useless touchscreen, and once the phone dried off, everything would return to normal.

As we’ve said before, modern “waterproof” phone designs seem targeted less at the hard-core underwater demolition expert, and more at the accident-prone everyperson. There’s a good reason for that: there are about a thousand times more customers in the latter category than the former. But at some point, even regular-type folks are going to start expecting their phones to work in the shower, just like those models in the T-Mobile demo. And more practically speaking, it doesn’t make sense to confine those in need of waterlogged communicators to brick-like dumbphones with ancient internals. We’re getting tired of linking to the same old article, but it’s true: durable phones shouldn’t have to be crappy ones. By the same token, water-resistant phones shouldn’t have to dry off first in order to become useful again. As my colleague Jaime Rivera states in his piece on the Galaxy S 4 Active, “Nobody buys a candle to hide it under the table. You [buy] it because … you want to be able to use it.”

I couldn’t agree more. So here’s to hoping that the era of usable waterproof phones dawns (again) soon.