A few days before heading out to Las Vegas for my third consecutive Consumer Electronics Show, I started having flashbacks to the … uhm … adventure the previous two shows had been. Not only were they scheduling and logistical nightmares, they were hell on your feet, back, sleep schedule, and morale, much less your health.

For anyone who has never been to a trade show like International CES, it’s essentially three or four days of intense walking, minimal eating, and lots on stress. Oh, and there might be some (or a lot of) booze in there somewhere.

I’ve learned a lot from these shows. Eat early, rest when possible, and box-out outlets like they’re going out to style. Also, get all the sleep you can.

But three days before leaving the comfort of the east coast, I had an idea. I wanted to track my steps in Las Vegas. I wanted to see how much I really walked at the show, and how little I slept.

I’ve always tried to keep a mental tally of all the miles I walk. But when you’re running to wait in cab lines, hopping on and off the monorail, and zig-zagging up and down the strip for three full days, plus trying to cover the entirety of the Las Vegas Convention Center, keeping up with all of that data using mental approximations becomes rather difficult, if not impossible.

The Tuesday before heading out, around 7:00 PM, I stopped at a Target near my apartment and picked up one of the few fitness trackers left over after the holiday rush, a blue FitBit Flex.

I didn’t event wait to get to the car before ripping it out of the package and connecting it to my phone. And I immediately started tracking to establish some sort of a base before heading out to Vegas. 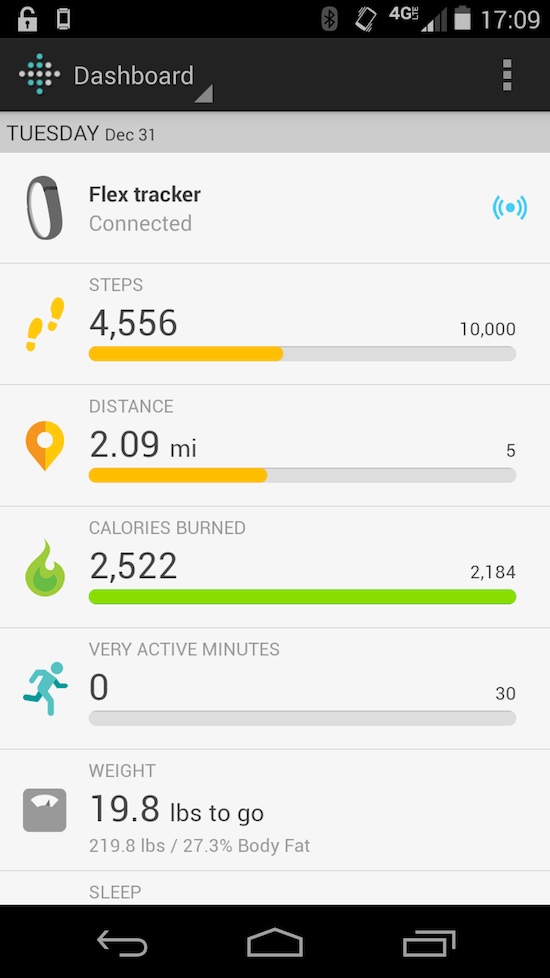 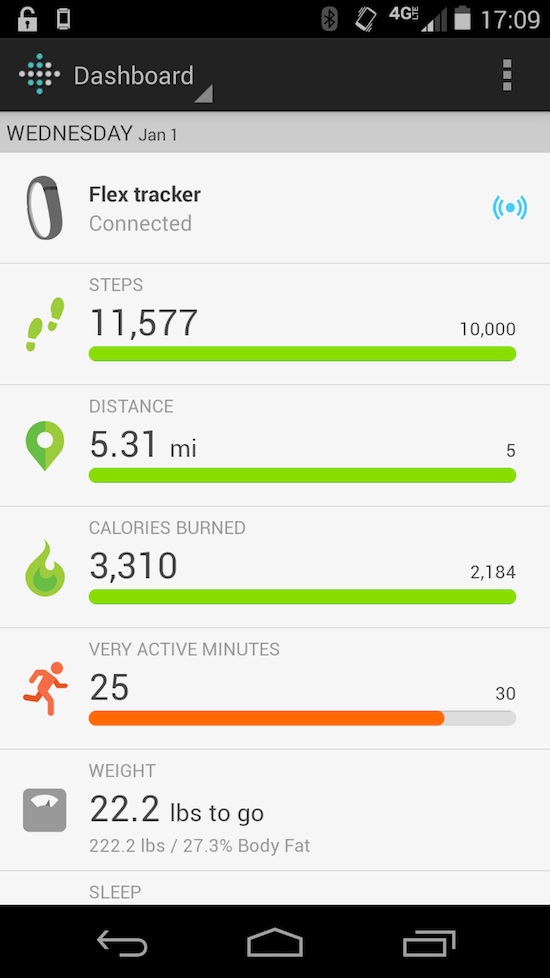 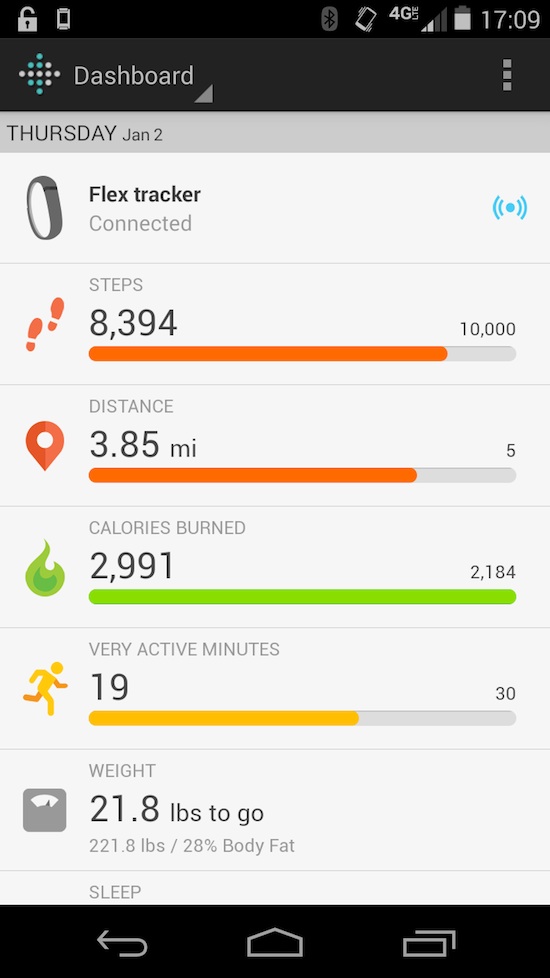 That night, I went bowling at my family’s establishment for a New Year’s Eve celebration. For some raw data, between 7:00 PM and midnight, while bowling and lounging, I tracked 4,556 steps and walked approximately 2.09 miles, and burned 2,522 calories. The next day, January 1, was a fairly normal day for me when I’m not working. I took 11,577 steps, covering 5.31 miles and burning 3,310 calories. And January 2 was when I started feeling under the weather with a pretty serious head cold. I walked 3.85 miles, took 8,394 steps, and burned 2,991 calories.

The following two days fell in line with the under the weather metric, mostly lounging and sleeping off a horrible cold. 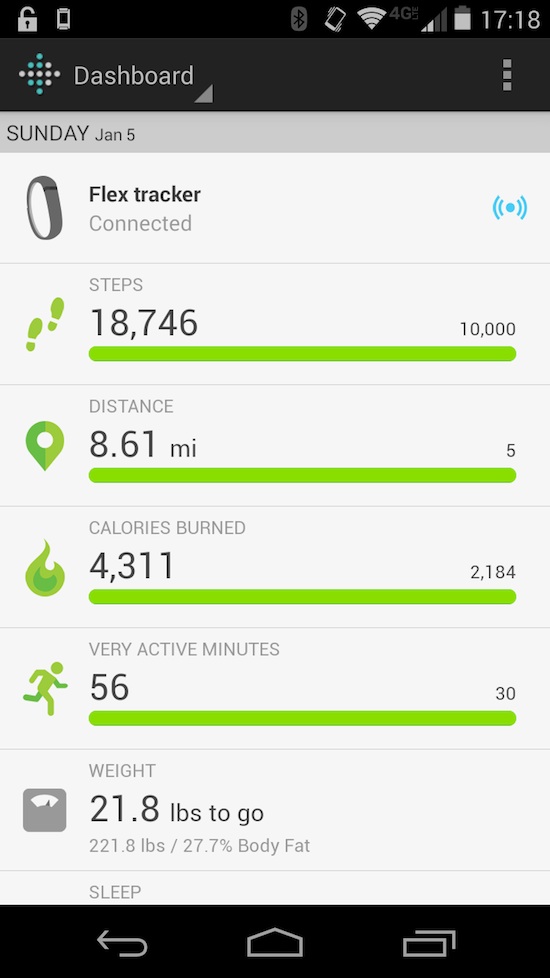 But how does a standard day of activity compare to just one day at CES? This is what I wanted to know. It’s the main reason I got interested in a fitness tracker, aside from the need to get back on my old fitness plan.

I’d say I woke up to go to Charlotte Douglas International Airport around 4:00 AM ET on Sunday, except I never went to sleep. I stayed up the whole night preparing and packing, because I’m the world’s worst procrastinator when it comes to travel preparation. So the CES tracking began at 12:00 AM on Sunday, January 5. I boarded my flight at 5:30, ran to a connecting flight in Detroit, and landed in Las Vegas around 10:30 AM PT. There, I met up with Anton, where we grabbed a bite to eat, went to a meeting, walked the strip for a while, and finally called it a night around 12:30 AM. 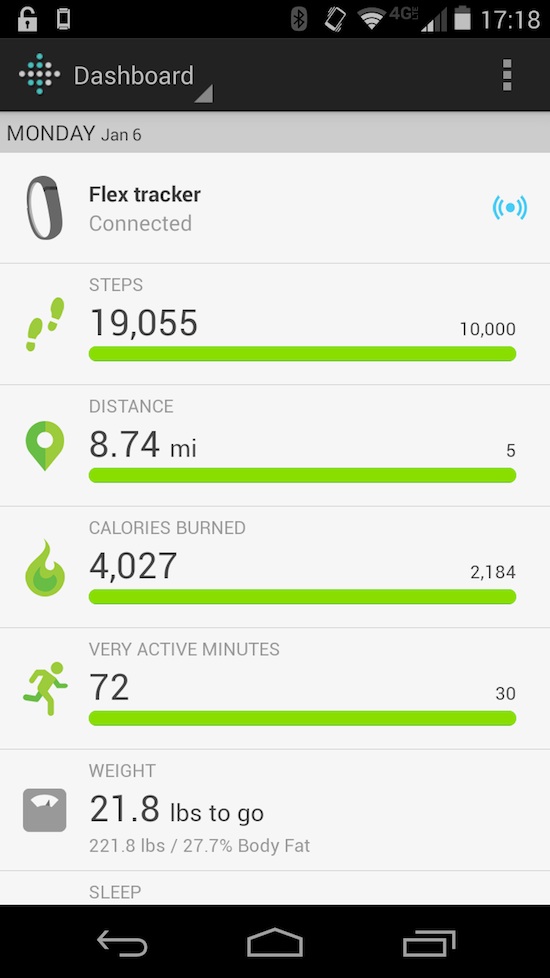 The first day in Las Vegas, two days before the show had actually started, I had already taken 18,746 steps. Only there for 14 hours, I walked 8.61 miles, and burned 4,311 calories – almost double my normal day.

While Anton and I waited on Michael to arrive, we went to two press events in the morning and met up with him at a pre-brief at a hotel along the strip. We had three other items on the agenda afterwards, and we also had a rental car, which meant significantly less walking and waiting (on cabs). By the end of the second day in Vegas, I had tracked over 19,055 steps, 8.74 miles, and 4,027 calories burned.

The third day, however, was the brunt of the whole ordeal. CES 2014 had officially started and the masses were rushing to the LVCC. And that building, which seems relatively small and easily conquerable on a map, is horrifyingly cavernous in person. Just when you think you’re at the correct booth in South Hall 3, you realize the booth tour you’re scheduled for in five minutes is at the company’s other booth … in North Hall, the complete opposite side of the colossal building. 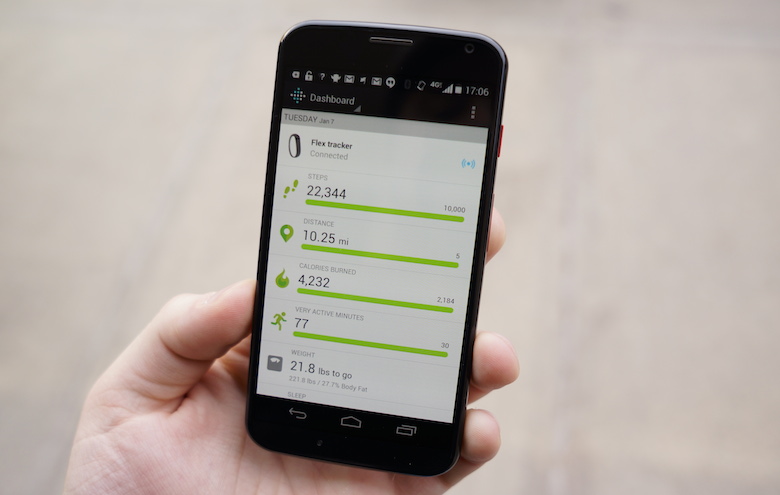 After parking a half mile from the convention center (for half price parking, yeah!), we walked to the complete opposite end of the LVCC. Running back and forth all day like mad men, heading to dinner afterwards, then heading to another dinner afterwards, and finally landing back at the Luxor, I racked up 22, 344 steps the third day in Vegas. I walked 10.25 miles and burned 4,232 calories.

So roughly 60,145 steps, 27.6 miles, and 12,570 calories burned later, Michael, Anton, and I shot the recap video and headed back to the rental car drop-off and caught busses to our terminals.

Since I’ve returned home (five days ago), my total step count has remained below 10,000, mainly because I’ve been fighting off the annual plague, a sickness commonly known as CES Flu. Tony and I have been bedridden with high fevers, and Michael has been nursing his voice back to workable condition.

Nonetheless, what does all of this mean? Well, other than the fact that everyone does a ton of walking and comes home sick with blisters and sore bodies, not a lot. But my goal in tracking my every move in Vegas wasn’t to uncover some mystery or reveal some secret behind the trade show world.

Instead, I wanted to put it into perspective … for myself. I live a heavily sedentary lifestyle (which I’m not terribly proud of or content with), and the show is so vastly different from anything else I encounter each year.

I also wanted to put it into perspective for you, for anyone who has never been to such a show. It’s a fun time. It’s stressful, tiring, and it wears on the body like nothing else. Nothing ever goes according to plan, and you can never begin to see everything there is to see. It is, by and large, the grind. And I love every minute of it.

In all, those numbers are nothing to scoff at: over 60,000 steps in three days, 27.6 miles walked, and 12,570 or so calories burned. Those are big, big numbers – roughly double what I do in a normal (active) day. And the worst part? The show is still growing every year, both in size, exhibitors, and attendance. My feet are already hurting just thinking about CES 2015.

The device was first spotted on the website Lenovo created for MWC 2021.