Wacom’s MobileStudio Pro stand is finally here. Was it worth the wait?
Published 27 January 2018, 13:24 EST

Wacom released the MobileStudio Pro in 13″ and 16″ varations way back at the end of 2016. A nice stand to hold the MobileStudio up on a desk or table at various angles was always planned to be an optional accessory to go with the high end tablet. We reviewed the 13″ Wacom MobileStudio Pro back in March of 2017 and considered it to be the best high-end tablet PC for creative professionals, but the custom stand attachment was nowhere to be found. It turns out there were quite a few issues with the original design and Wacom had to put a lot of work into getting it to work right. Obviously, this was very frustrating to the MobileStudio Pro users out there and Wacom even had to start recommending 3rd part stands while they worked on the dedicated hardware redesign. After many delays, we’ve finally got the final product, so let’s take a look. 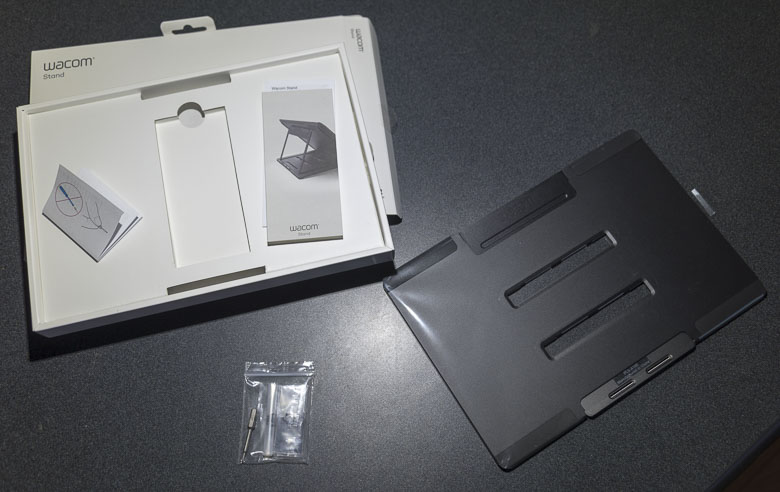 In the box, of course you get the stand itself along with some instruction booklets and the little plastic bag contains new hinge clips along with the actual screw driver bit that you can use to replace the stand hinge clips on the back of a MobileStudio Pro. Replacing these is probably not necessary, but it’s great that Wacom included a spare in case they are. 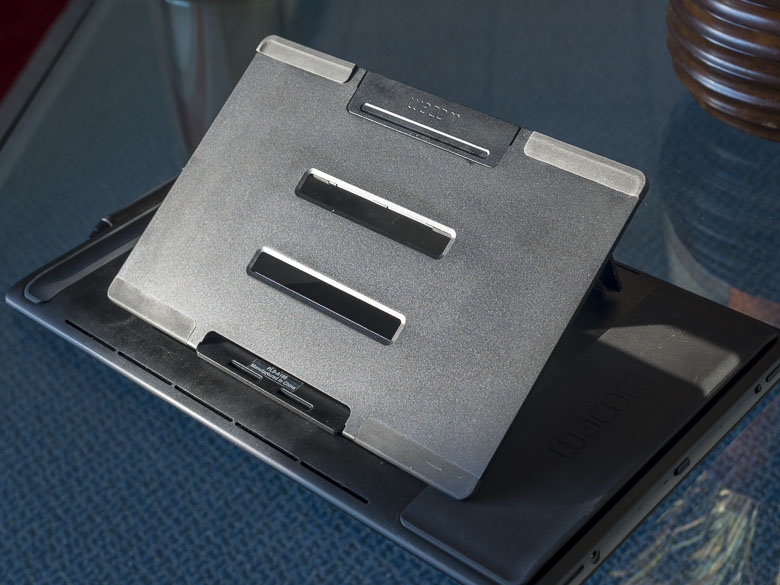 First you’ll want to clip the above stationary end of the stand to the bottom side of your MobileStudio Pro.  It’s important to decide which side is the bottom side because it can go either way… and that’s very good because if you’re left handed you may want the pen holder on the left side with the customizable express keys on the right side where as if you’re right handed, you may want to opposite orientation. 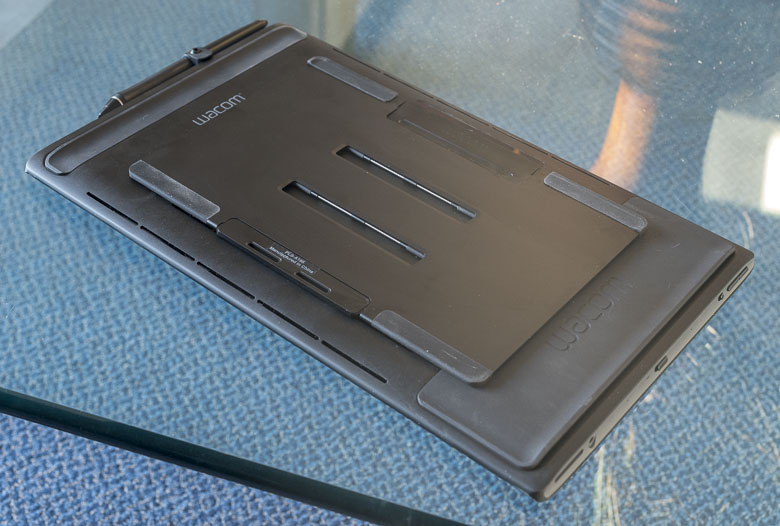 The metal stand lays flat against the back of the MobileStudio Pro and can clip into the other hinge side in order to keep it together in your bag. You’ll see there are nice rubber feet on the stand too. These are made from the same material as the regular rubber feet on the MobileStudio Pro, and unfortunately they can attract dirt in the same manner. 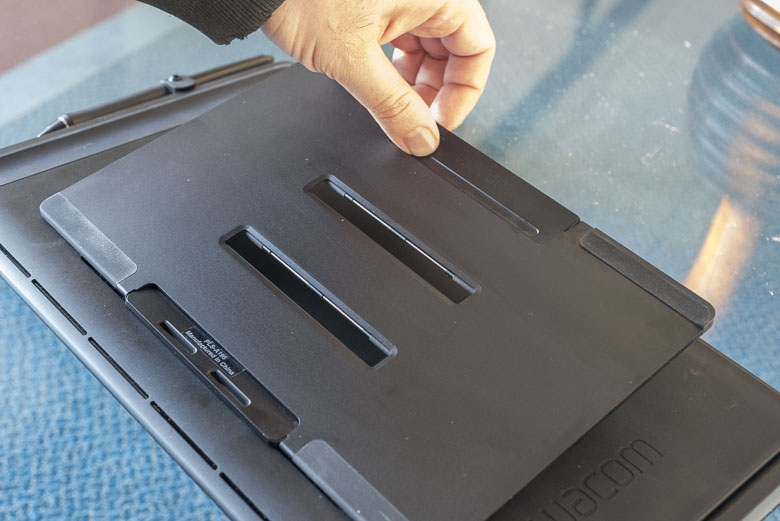 If you clip both ends flat against the back, it can be very difficult to unclip the opening end when you want to use the stand. There is a bit of a lever in the middle that can help, but it’s still not super easy. I was pulling on the corners and almost pulled the adhesive rubber foot off, so don’t do that. The easy way to detach hinge when flat is to press hard on the indented area in the middle (where the thumb is shown above.) 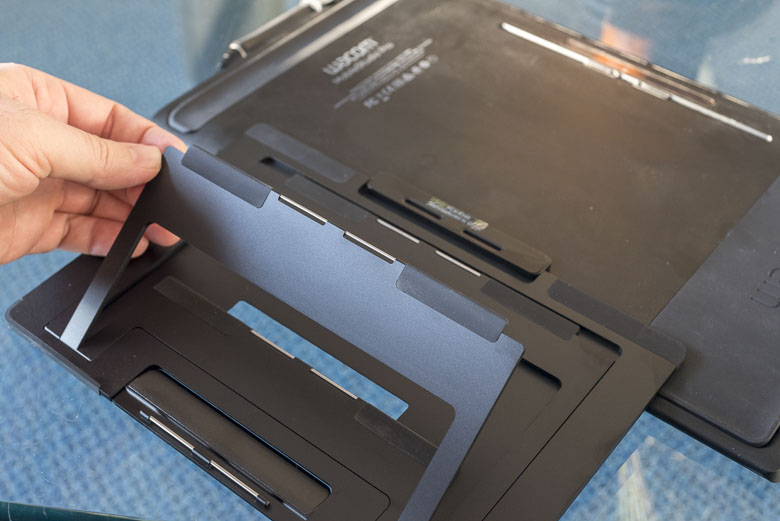 On the inside of the stand there are 3 hinged levels and each one has another metal cylinder hinge that clips into the other end of the back side of the MobileStudio Pro. Each one also has another set of rubber feet to protect the device from scratches. 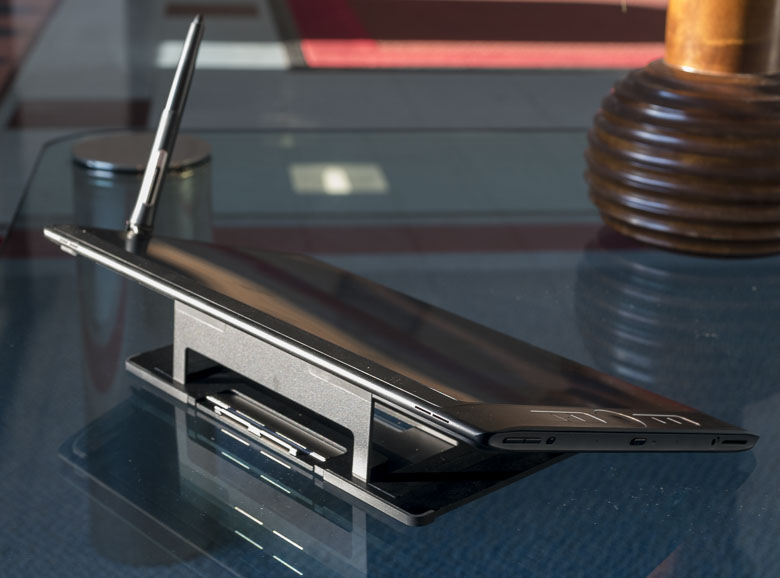 Here’s a look at the lowest angle which gives you about 2 inches of lift. 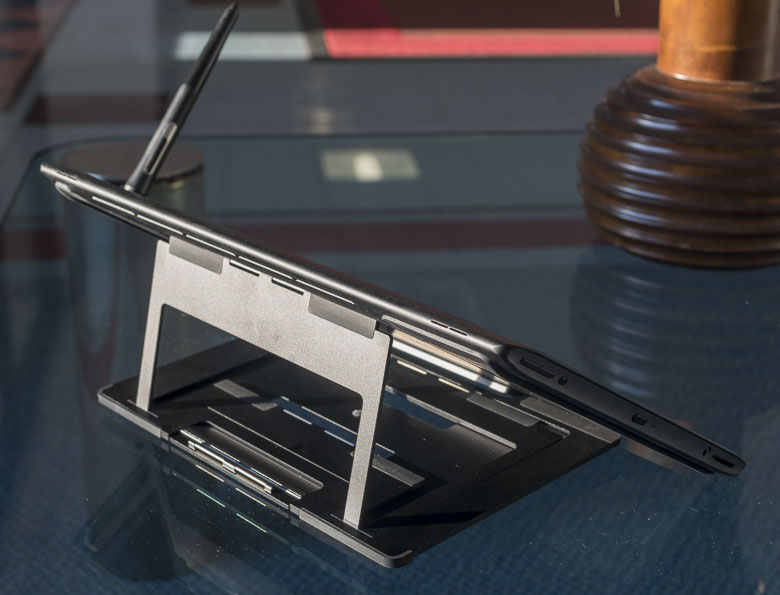 The middle hinge length gives you about 4″ of lift. 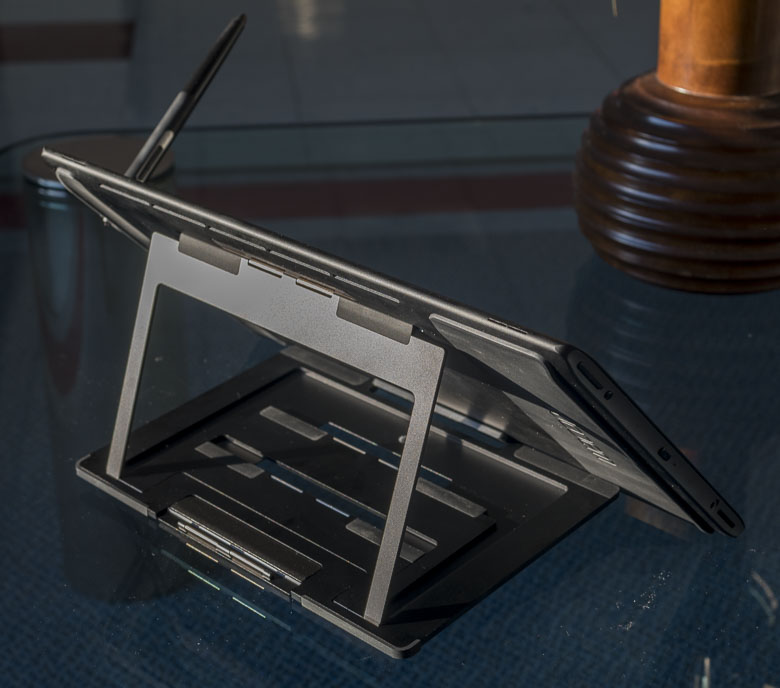 The steepest angle is still not as steep as a laptop screen could get, but this gives you about 5.5 inches of lift. 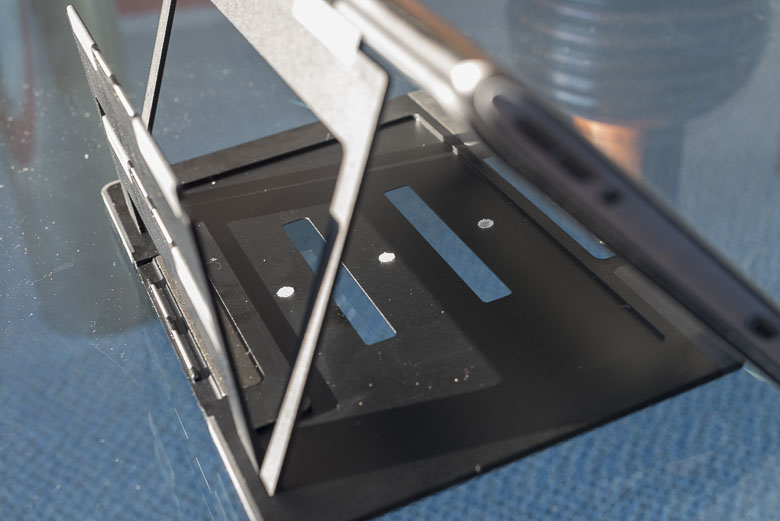 All three of the metal stand options have a little bit of Velcro underneath that keeps them from flopping around and making noise when not in use. Very nicely done! 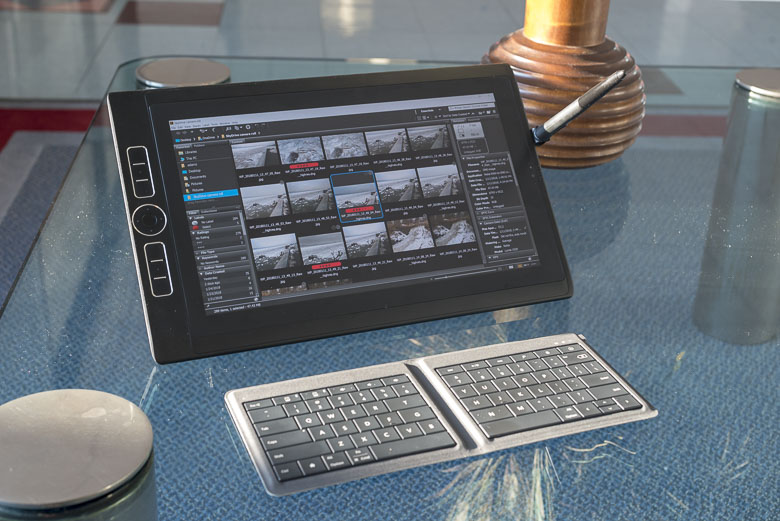 In use, the stand is very solid and sturdy. I feel like I can put any amount of weight and pressure on the Wacom MobileStudio without having to worry about the stand moving or sliding. It feels like my desk might break before the stand does. I know some of you use plywood and saw-horses as desks, so keep that in mind. It works really well on my lap while sitting as well, but if you’re wearing shorts, the metal base might be a little cold at first. The stand does offer only 3 tilt angles where as the 2017 Surface Pro stand can be adjusted to any angle you want and other devices like laptop computers also have much more variable tilt angles, but those variable tilt angles come at the cost of stability. If I press too hard on a Surface Pro screen, the stand could move.  Wacom’s stand design isn’t going anywhere. On the other hand, changing the angle by tilting up the tablet, pulling off one hinge from the clip, then puling up another stand length, then attaching that to the hinge clip is a lot more work and much more tedious than a simple variable-angle kickstand. Personally, I think putting the priority on giving the stand a sturdy strength was the right choice for Wacom’s professional high end creative customers.

On today’s Pocketnow Daily, we talk about the upcoming Samsung Galaxy event and what to expect, OnePlus 9T rumors, and more.

On today’s Pocketnow Daily, we talk about the official announcement of the Samsung Galaxy Unpacked event, the iPhone 13, and more.

We keep on getting amazing deals from Amazon, Best Buy, and more, where we find the…