Wacom’s 3rd generation Windows tablet PC brings some impressive upgrades to the high-end tablet PC market. Find out what’s new with the Wacom MobileStudio Pro which will soon be available in 13″ and 16″ models.
Published 11 October 2016, 09:22 EDT

If you’ve ever dabbled in professional graphics, architecture, 3D animation, video editing, or other creative fields, you probably know about Wacom tablets. These graphics tablets have been around for decades and generally have been indispensable for digital artists. In the past they were simple flat sensors that you would plug into a larger computer and use with a pressure sensitive stylus. In recent years, Wacom has started making stand-alone tablets that include full operating systems. There have already been two generations of the Wacom Cinitq Companion which was essentially a full Windows PC behind Wacom’s Cintiq display/digitizer technology. There was also a Cintiq Companion Hybrid version that ran Android, but that has been discontinued since that operating system isn’t really capable enough for creative professionals.

Wacom just announced their 3rd generation of Windows-based professional portable tablets and with it, they have a new name for the hardware. Now instead of the Cintiq Companion, this tablet PC is called the “MobileStudio Pro”. I like the new name a lot. It’s much more descriptive of what this thing is capable of.

The MobileStudio Pro is going to be available in November in 2 sizes, a 13 inch screen size and a 16 inch screen size and the other day at NY ComicCon, I got to try them out for a little while. The MobileStudio Pro 13 will have 4 configuration/pricing options while the MobileStudio Pro 16 will have 2 configuration options. For more information about the 6 different configuration options, you can see all the specs on Wacom’s website. The configurations range between Intel Core i5 and i7 processors with between 4GB and 16GB of RAM, plus between 64GB and 512GB SSD storage. Some configurations also include “RealSense” 3D camera and scanning software. The 13″ models include Intel Iris 550 graphics GPUs, while the larger 16″ models include NVIDIA Quadro M1000M graphics with either 2GB or 4GB GDDDR5 VRAM. Those Quadro GPUs are going to be great for really high-end creative work in the full Adobe CC suite, Autodesk design programs, and anything else you want to throw at it. 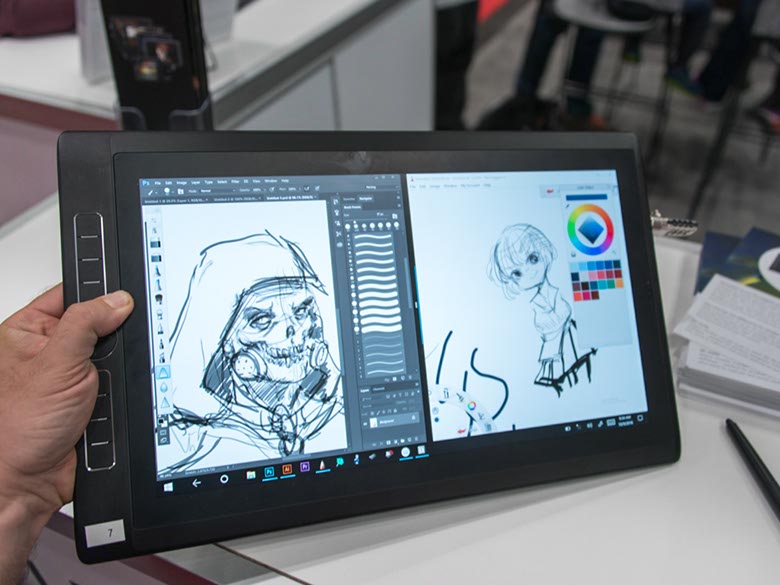 Drawing and painting with the new Wacom MobileStudio Pro is ridiculously smooth. These tablets now have over 8000 levels of pressure sensitivity. Previous Cintiq models often only had about 2048 levels, and other tablet PCs like the Microsoft Surface Pro 4 only have 1024 levels of pressure sensitivity. The Wacom MobileStudio Pro also recognizes pen tilt. Many professional graphics programs like Corel Painter and ZBrush 3D can use the tilt recognition input data for yet another level of precise control over content creation. There’s no parallax effect with the screen either, so it looks and feels like you’re interacting directly with the content on the screen. And that screen displays up to 96% of the Adobe RGB color gamut! I don’t know how that compares to Apple’s made-up “wide color” terminology, but 96% of the Adobe RGB gamut is something that’s much more well-defined and pretty impressive. Multi-touch panning and zooming on the MobileStudio Pro is also much faster and smoother than it is on the Surface Pro 4. These Wacom tablets are very responsive. 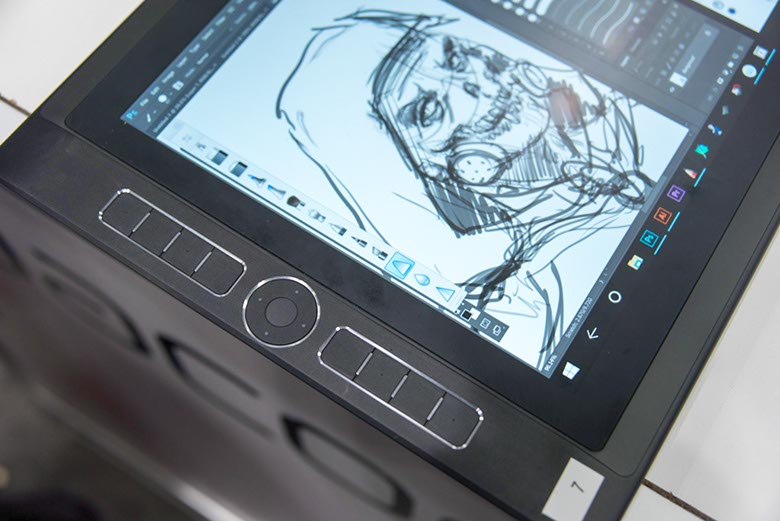 On the side of the bezel there are customizable hardware buttons that you can use to invoke keyboard modifiers, keyboard shortcuts, or other application-specific functions. The 16″ version has 8 customizable buttons while the 13″ version has 6. You’ll notice that the bezel is very large on these tablets, and that’s by design. Having a flush flat area to set your hand down on while drawing is very important for comfort and accuracy. 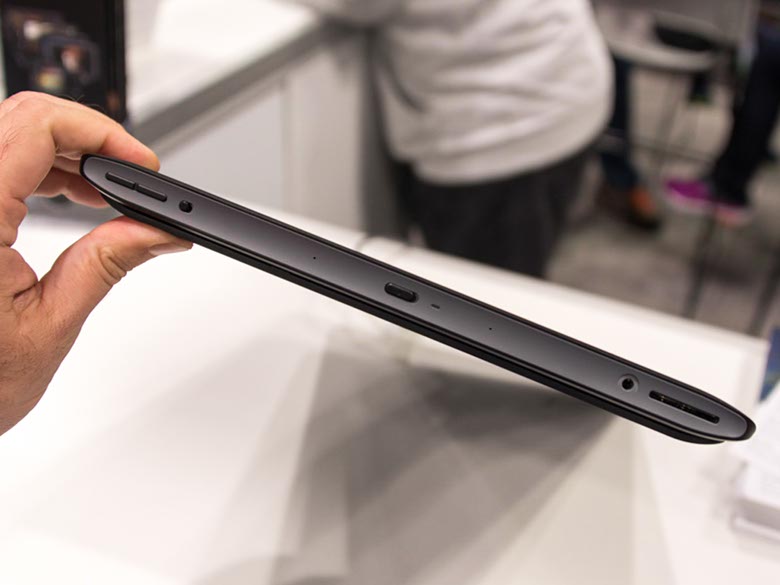 On the side in the above photo you’ll see some hardware buttons for volume and power along with a 3.5mm headset jack and a full sized SD card slot. I’m happy to see the SD card slot since that makes copying and accessing RAW photos and HD video from a camera very easy. There is no MicroSD slot for expanding storage, but of course you can use an SD card for that as well. 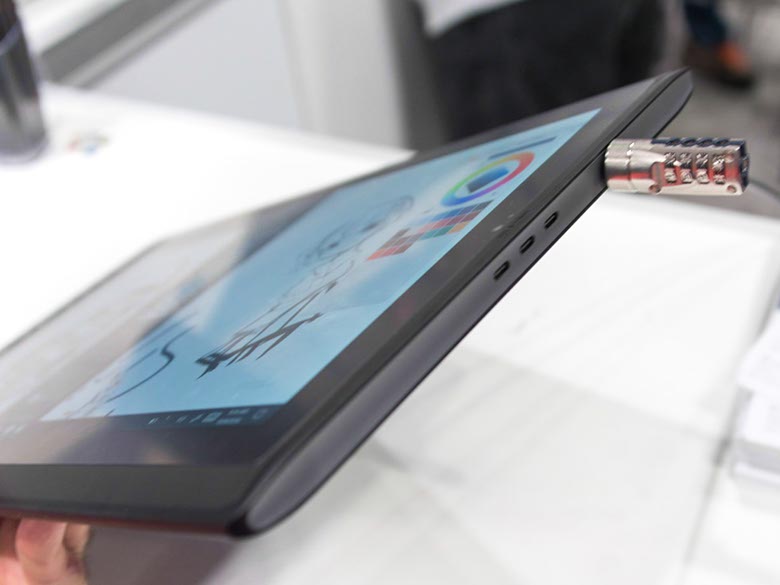 On the other side there is a big Kensington Security Lock slot so if you’re a business and you don’t want people walking away with these, there’s no problem locking them down. You’ll also see 3 USB-C ports. There are no regular USB-A ports on this. That’s a little disappointing since I don’t think USB-C is quite ready for prime-time, but having 3 USB-C ports instead of just one is pretty great.

Previous versions of Wacom’s tablet PCs often included extra accessories like a case and stand, but this time the tablet only includes the Pro Pen stylus, pen case (w/ replacement nibs), pen holder, and the AC adapter. Keyboards, stands, and cases are sold separately. That’s a good thing because maybe you don’t care about the stand, you already have a laptop bag to fit it in, and you already have a keyboard too.

One other accessory that deserves mentioning, though we didn’t get to try it out is the “Wacom Link”. The Wacom Link is a box that you plug into the MobileStudio Pro on one end and then plug into a larger desktop PC or Mac on the other. That then turns the MobileStudio Pro into another display and fully functional Wacom graphics tablet for your bigger desktop computer. That means if you’ve got a really powerful workstation at the office, you can plug this in and use it to draw on while taking advantage of your desktop workstations increased RAM, GPUs, storage, multiple CPUs, etc. Then when you’re on the train or airplane or otherwise out of the office, you can use the same thing with its internal computing power to do the same type of work. 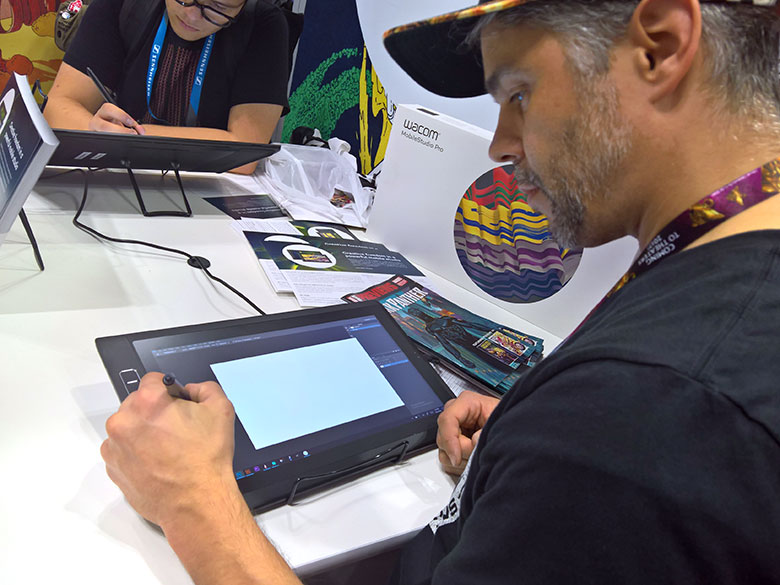 Above you see my old Tae Kwan Do sparring opponent and friend, Nelson Ribiero, trying out the Wacom MobileStudio Pro at the Wacom booth at NY Comic Con 2016. Nelson normally uses an older Cintiq pen display that requires an external computer in his career as a Marvel comic book illustrator, and he sees this as working about the same way as his normal professional workstation set up except without the requirement of being tethered to a larger desktop computer. He says, “This might be the world’s first device to get me to consider getting anything that ran on Windows.”

It’s interesting that since the late 1980’s and early 90’s, the Apple Macintosh computer has long been considered the best tool for digital artists and content creators in the fields of graphic design, printing, publishing, digital photography, video editing, animation, etc. Yet today, most professional graphics programs like Adobe’s Creative Cloud suite function about the same on both Windows & Mac platforms. Even the fonts almost seamlessly work between both platforms these days. If you find you can’t tolerate using Windows between the time it takes to boot up and launch Photoshop, the awesome thing is that the MobileStudio Pro can be plugged into your Mac to be used as a pen display too.

I also met a woman at the Wacom booth who had stopped to see the new models and mainly uses Adobe Illustrator on both Macintosh and Windows computers. She already has the older Cintiq Companion that she uses as a designer at a popular social network app development company. She swears by it (as well as the giant Cintiq 27QHD creative pen & touch display that she also uses with a Mac) and never wants to go back to using a mouse or trackpad. I felt the same way after getting my first Wacom ArtZ tablet in 1997!

If Wacom can sell their new MobileStudio Pro tablets to the talented digital artists, architects, animators, 3D sculptors and content creators out there (especially the ones struggling with junky Bluetooth pens and iPads), they could really be successful in those niche markets.