VZ Navigator is a turn-by-turn navigation app for Verizon smartphones. But in the era of Google Maps, is it worth paying for? Read our review to find out.
Published 12 December 2012, 02:32 EST

“In a world where Google Maps exists, who needs a carrier-branded navigation offering?”

That’s the question that leapt to my mind when I was given the opportunity to review VZ Navigator, Verizon Wireless’ house-branded GPS navigation app. Not that I had a bad history with carrier-badged navigation software; the first turn-by-turn app I ever used, back in 2004, was only briefly sold under its original TeleNav title before being repackaged as “Sprint Navigation.” And I loved it. Even running as a Java app on a dumbphone, the software got me where I needed to go, and featured plenty of extras. For the ten bucks a month it cost, it delivered outstanding value.

But that was eight years ago. Ever since Google introduced free turn-by-turn driving directions in 2009, the question for Android users has been “why would I pay extra every month to get turn-by-turn navigation?” That question slowly but inevitably led the rest of the industry’s customers to ask why they should have to pay extra, as well, and Google’s competitors were forced to rise to the mark that Google set with Android 2.0. Today, users of all three major mobile smartphone platforms have access to free turn-by-turn GPS navigation.

In this brave new world of gratis guidance, it seems almost foolish for wireless carriers to try peddling their own branded wares (and charging a fee for the privilege). Yet each of the three largest US carriers do. Is this a sign of some mass delusion on the part of the carriers, the same sector of corporate thinkery that gives us bloatware like pre-loaded “live TV” and barcode-scanner apps? Or is it a legitimate value-add that might be worth a few bucks a month?

Deciding that was a question worth answering, I took VZ Navigator for a spin over the weekend to find out.

If a service is going to cost you money, the least it can do is make the buying process relatively painless. In this regard, VZ Navigator does its job well; it was very simple for me to subscribe to the service and start my 30-day free trial, right from the VZ Navigator app that came pre-loaded on my Droid RAZR M. In less than a minute, I’d committed to the recurring $2 monthly charge that Verizon promised to bill me once the trial period was over.

Once in, I very quickly became aware that this was, as they say, “not my father’s TeleNav” (or indeed TeleCommunication Systems, the vendor Verizon credits as “powering” the app in its About screen). VZ Navigator isn’t just another me-too guidance applet, but a full suite of location-based services. 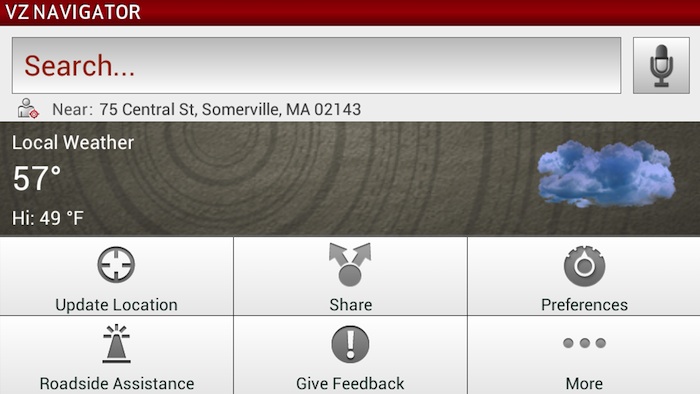 Let’s get this out of the way right now: VZ Navigator is not a pretty app. It’s clearly trying to walk the line between safe-behind-the-wheel-big-graphics and aesthetically-pleasing, and it’s only succeeding at the former. The predictable red-and-white interface elements clash with the nondescript, papyrus-like wallpaper in a dull dance of beige blah. It’s not even exciting enough to be offensive; it’s just boring.

But. Once you get past that -which takes about five seconds- you’re confronted with an almost dizzying array of choices. The app’s homescreen automatically scrolls through a seven-pane carousel of features whose default range includes Roadside Assistance, Local Weather, Local Gas Prices, Movies Nearby, Product Tips, and Events Nearby (from concerts to theatre and other live performances). Users can modify this array -as they can modify almost any other portion of the app- to include Dancing & Nightlife, Exhibits & Art Shows, Sporting Events, or any of several other categories. Spend enough time on the homescreen and its neighboring pages, and you’ll forget you’re in a navigation app at all. 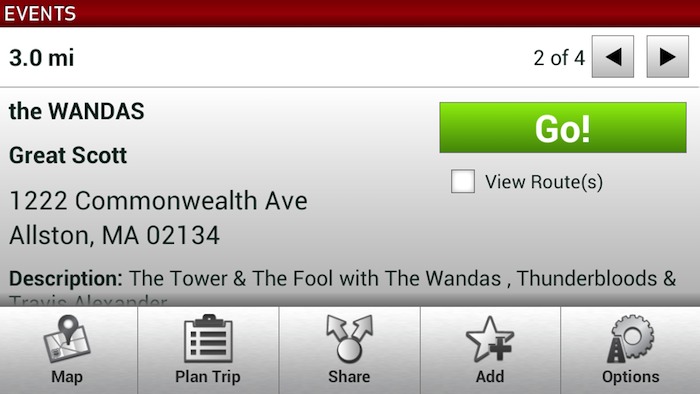 But you’ll be reminded of VZ Navigator’s nature once you decide which of those local events to attend, as the app will provide -in addition to the showtime, address, and cost of entry- a quick shortcut to navigation in the form of a big, green “Go!” button. Pressing it gets you to VZ Navigator’s raison d’être.

For our on-the-road testing, we didn’t opt for an event, but instead a destination: Salem, MA, a city about 14 miles north of our native Boston. For input, we opted for the quaint keyboard, typing the city name into VZ Navigator’s search bar, but we could have spoken the destination if we’d been so inclined. Once VZ Navigator plotted our course (a speedy process over Verizon’s 4G LTE network here in Boston), we were on our way.

The app’s driving UI will be familiar to anyone who’s ever used Google Navigation, or a dedicated GPS unit. Here, in contrast to the drab dullness of the home screen, the interface’s colors are bright and vibrant, with the surrounding landscape containing just enough detail to be clear, without crossing the line into distracting. Overlaid on the 3D map are a speedometer (with optional tie-in for local speed limit display), ETA to destination, current street, distance to destination, and distance to next turn. 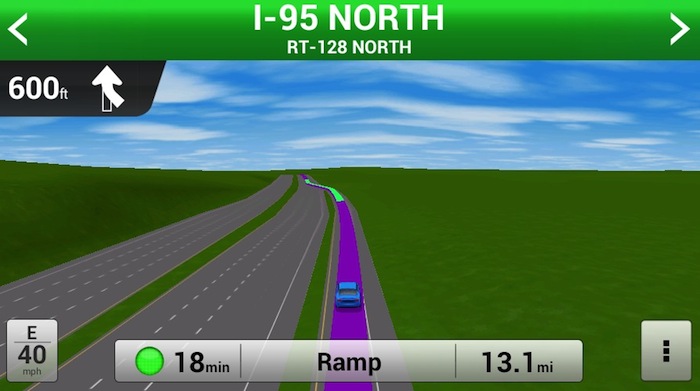 Here too, almost everything is tweak-able, from the route options -you can change mid-trip from driving to bicycling to walking directions- to the navigation voice: you can choose either “Michelle” or “David” as your guide. The voices are nicer than some alternative navigation solutions, a little less grating. More importantly, the phrasing is much more natural: instead of Google Navigation’s heart-attack-inducing “turn right on ___ street” when the turn is still a quarter-mile away, VZ Navigator’s voice will helpfully lead off with “use the left lane and turn on Charles Street,” or “get ready to make a U-turn at So-and-So Avenue.” It sounds minor, but it makes a world of difference in practice.

Speaking of U-turns: the app handled deviations from the plotted course well, rerouting us quickly when we got off the beaten path– even over slower 3G connections. If we’d wanted, we could have opted to avoid highways, tolls, carpool lanes, even ferries. We could have used virtual buildings in 3D mode to serve as landmarks; the building models are available as city-sized download packages within the app. We didn’t use either of those special features, but we did change to a more specific destination as we approached Salem and found our stomachs growling. Without missing a beat, the app dutifully redirected us to The Lobster Shanty.

Any app with such a rich feature load and such granular customization options is bound to have a few nits to pick, and VZ Navigator is no exception. We found it annoying that features like pinch-to-zoom and tap-and-drag were supported in the static map mode, but disabled once navigation had begun, forcing us to fiddle with little zoom keys in the corner.

Also, the local-search options had a tendency to be annoyingly specific; searching for “groceries” or “convenience” didn’t uncover the name of a convenience store right around the corner from us, but searching for its name did. Similarly, searching for “bar” didn’t reveal a local watering hole 200 feet away, but did identify one a mile down the road. In the worst of these failures, the app proved incapable of locating my home address when we wanted to return from Salem, forcing me to input the address of a coffee shop next door to my house so we could navigate back. These problems are hardly unique to VZ Navigator, as we’ve discussed recently, but they bear mentioning. 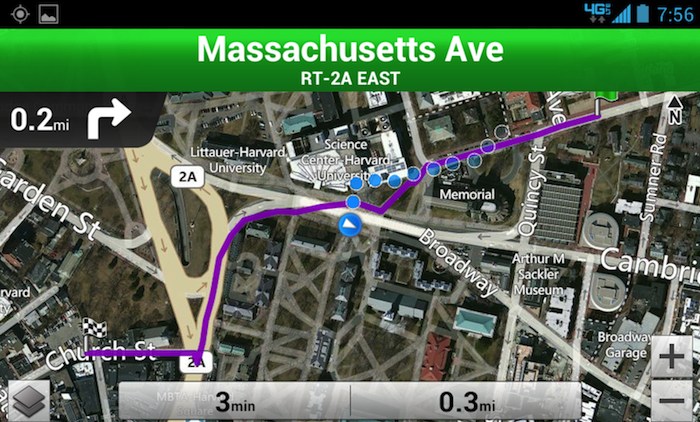 Verizon Navigator is a curious product. Three years ago it would have blown my hat off with its feature set, and earned an unqualified “buy it now” recommendation. Even today, it’s an enormously capable and well-designed app, and we’d trust it to navigate us almost anywhere.

The problem is Google Navigation. Though it’s more visually complex, vocally inferior, and lacks some of VZ Navigator’s bells and whistles, Google’s turn-by-turn offering is an absolute powerhouse that blows away anything else on the market, VZ Navigator included. From the point-of-interest information to the downloadable maps to the sharing options to Street View, Google Navigation is just better. And it’s free to anyone with an Android device.

But not every smartphone owner uses an Android device. As Apple very publicly reminded everyone a few months back, not all mapping services are created equal. iPhone users continue to feel the effects of the “Mapplegate” fiasco, and Windows Phone’s available turn-by-turn solutions aren’t perfect, either. In the absence of Google Navigation on those platforms, we’d definitely consider paying for an alternative nav solution.

Thus, the real answer to the question, “would you recommend VZ Navigator” is in fact another question: “what smartphone platform are you on?” If the answer is Android, then we’d say no; unless you’re much more comfortable with Verizon’s Garmin-like UI, Google Maps delivers much more, for free.

If the answer is iOS or Windows Phone, though, that’s a whole other story. There are free turn-by-turn apps available for those platforms, and some of them actually deliver a fairly positive experience. But from what we’ve seen, they don’t come close to VZ Navigator in terms of feature set or polish. And for $2 per month, we’d be hard-pressed to say no to an app that provides as consistent an experience as this. Even if it does forget our home address from time to time.

VZ Navigator is available at verizonwireless.com/navigator for Windows Phone, Android, and iOS devices.

More rumors suggest that the new iPhone 12 lineup may not launch in September, but we can expect it to arrive with new iPads