Protecting large phones is a tricky proposition. If the phone is already big, many people won’t be interested in packing on additional bulk. Even with current trends, making phones more durable, devices with larger screens are inherently more vulnerable. More glass surface area, more chances of breaking it. 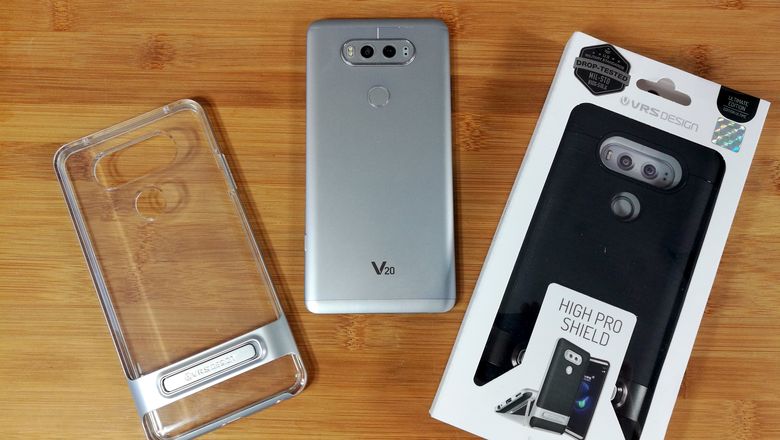 Cases serve as a way to protect, customize our phone’s style, and sometimes add a little functionality.

What to do with a phone like the LG V20. The general idea around the Pocketnow offices? The phone is “charmingly ugly”, like an old Thinkpad, but it’s built like a tank. If some phones are nimble roadsters, the V20 is a diesel truck.

VRS Design sent along a pair of cases for us to check out: a Crystal Bumper and a High Pro Shield case. Both are two-piece bumper cases with built in kickstands. A polycarbonate frame runs around the sides of the device, and the kickstands are spring loaded metal with a magnetic clasp. Both cases retail for $29.99. 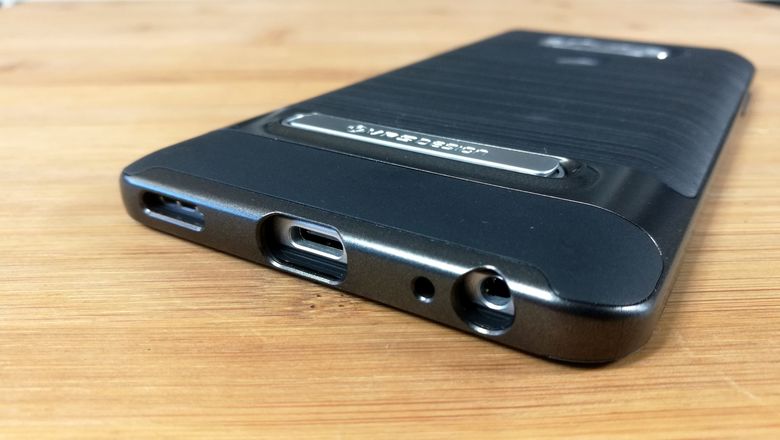 It would be completely unacceptable in this day to sell a case with ill-fitted ports and holes. No worries there with how cutouts align, and there are some nice touches, like the sculpting around the volume rocker to better communicate button feel and clicks. There’s plenty of clearance around the headphone jack and the USB port, and the bumper delivers a little clearance around the screen. LG’s design tapers the forehead and chin, but the case maintains a consistent height. 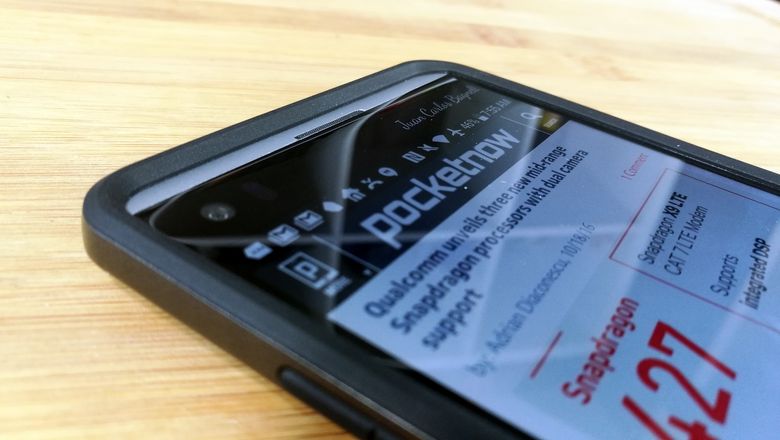 The V20 naturally looks something like a surprised Minion. Adding a dark case to the phone is kind of like fitting a Minion with a ski mask, but on the whole the curving cutouts around the kickstand are nice little design accents. 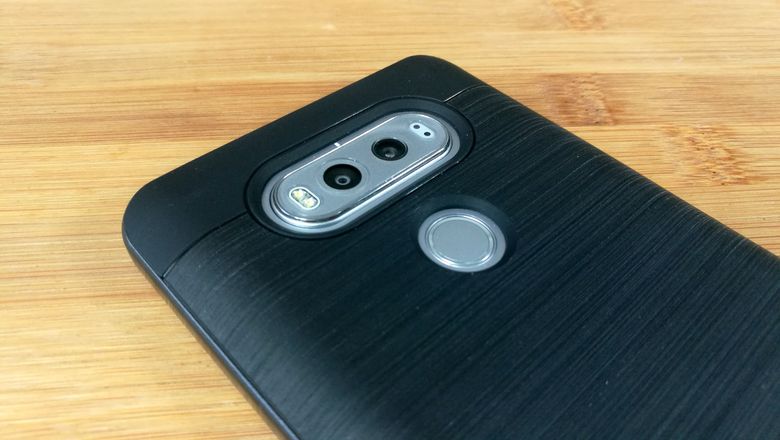 These bumpers also address one small issue with the V20. The V10 had a nicely grippy rear, which made it easy to hold onto despite its large size. The V20’s metal rear is a touch more slippery. Any bit of texture here is appreciated for a large, smooth, expensive handset. Happily, the band surrounding the edge of the phone doesn’t seem to degrade radio performance to any significant degree. 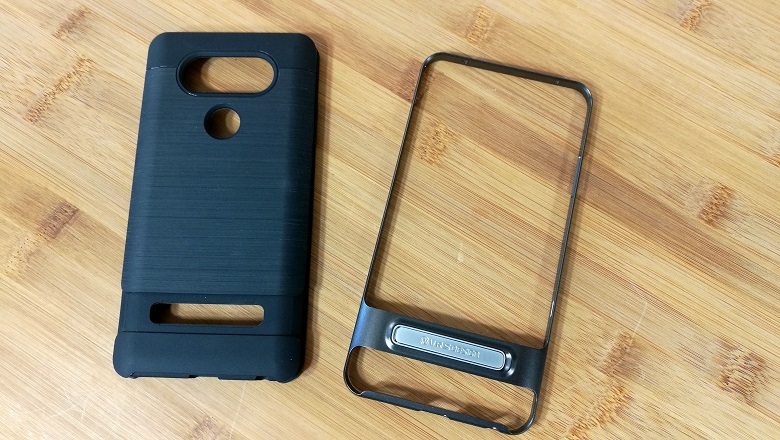 We’re just really happy to see more kickstand options becoming available. The V20 screen is large enough that traveling with a little Bluetooth keyboard makes for a handy writing solution. A kickstand case means you don’t have to travel with a stand. 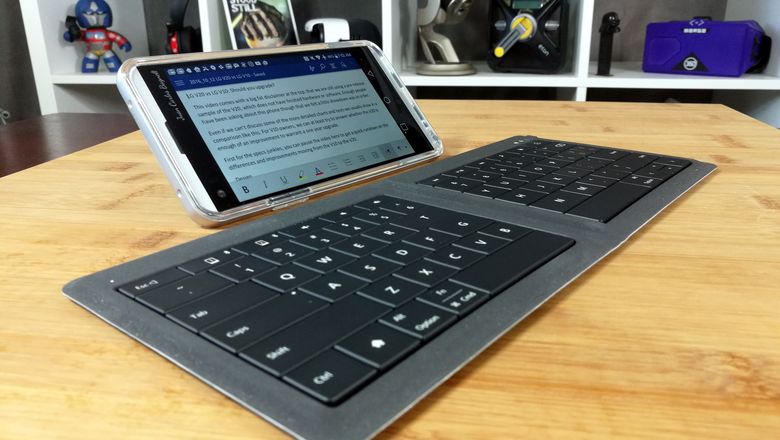 The V20 might not “need” a case, owing to the fact that this phone is already MIL-STD-810G drop and shock resistant, but if you want to keep the phone looking nice, it’s probably not a bad idea. Our V20 has already weathered a few drops onto concrete. The phone still functions fine, but there are some nicks and chips which would have been prevented had the phone been in a case. 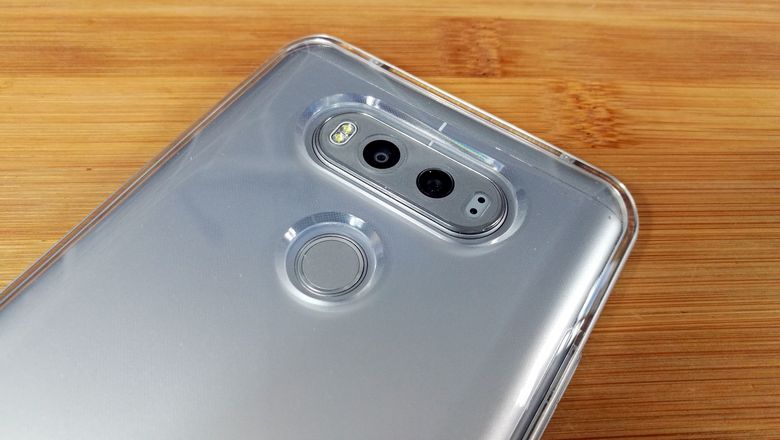 VRS Design is delivering some competitive options. A clean look, functional design, and at a price competitive with some of the more well-known manufacturers working in this space. The V20 hadn’t started shipping by the time we’d written this review, but if you pre-ordered or were considering the V20, these cases might be worth a look.