Up for grabs only in China at the moment, the groundbreaking Vivo X21 with under-display fingerprint recognition technology is set to expand to Singapore later this week, also heading to other “global” markets in the near future.

While the world’s first “full-production” smartphone with in-display fingerprint recognition technology never made it outside Vivo’s homeland, its similarly groundbreaking sequel is ready to expand from China to Singapore.

If that doesn’t impress you much, we should probably mention the Vivo X21 is also set to commercially roll out across other “global” markets soon enough, although we don’t have a full list yet or specific release dates.

All we know is a couple of major Singaporean mobile carriers will start to sell the device this Saturday, May 5, in exchange for 799 local dollars, which roughly equates to USD 600.

Presumably similar to the upcoming OnePlus 6 in terms of exterior design, the Vivo X21 settles for an upper mid-range Snapdragon 660 processor under the hood, paired with a generous 6GB RAM and 128GB internal storage space. 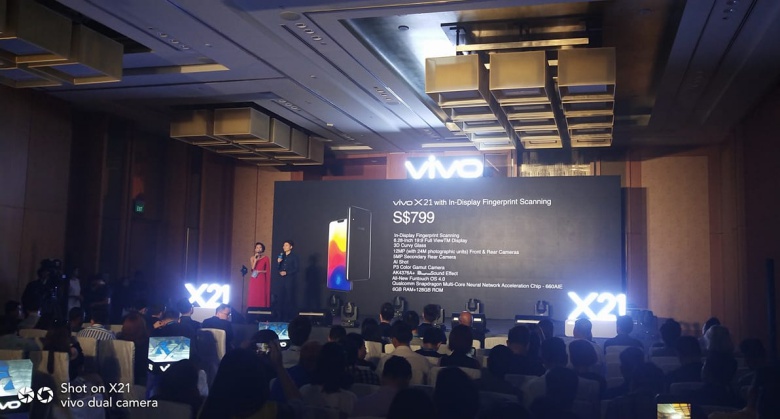 There are no physical buttons or sensors mounted on the front or back of the X21, but the screen bezels are not as drastically thin as those on the APEX concept either, with both an iPhone X-inspired notch and small chin in tow.

At the end of the day, the under-display fingerprint scanner is without a doubt the phone’s top selling point, allowing the user to simply place their finger on the screen for quick and secure unlocking. There’s one non-Vivo device that can do that, but it costs a heck of a lot more than $600.